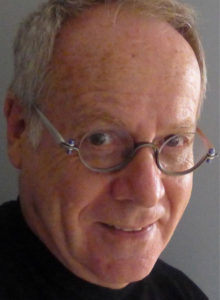 John E. Vollmer is the editor of Re-envisioning Japan: Meiji Fine Art Textiles. His other books include Silks for Thrones and Altars and Silk Roads, China Ships. He is the president of Vollmer Cultural Consultants Inc., and has held appointments at the University of Toronto, The School of the Art Institute of Chicago, and other institutions.

Q: What accounted for the rise and prominence of Japanese textiles during the period you write about, and why did it become less prominent afterwards?

A: Fine art textiles (bijutsu senshoku) were specifically developed by their Japanese luxury silk textile producers to appeal to Gilded Age and La Belle Époque tastes of the 1880s, ‘90s and early years of the 20th century. They were large, exquisitely worked, exotic and expensive--all of which made them attractive to Western buyers.

These textiles gained international prominence and public recognition through World's Fairs and as diplomatic gifts from the Japanese emperor to foreign heads of state.

The world's economy shifted dramatically after World War I both in the West and in Japan. The costs to produce such lavish textiles became prohibitive and the markets that avidly acquired them before the war largely disappeared.

Q: For people less familiar with this art, what are some of its most noteworthy features and why?

A: Fine Art textiles are an innovation of the 1870s that transformed traditional Japanese crafts into new products specifically targeted for modern, Western tastes.

They were made as large wall hangings (like western tapestries), decorative frame furniture such as folding and stationary screens and often as framed art pieces for the wall. 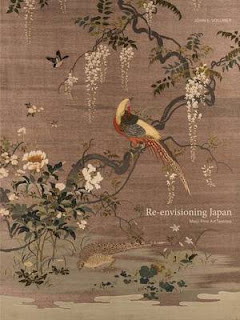 Government-sponsored study trips made by producers and other observers to the Europe and North America brought back information about luxury textile production and their markets, which were studied and incorporated into new ideas and designs.

The Meiji government sponsored the publication and distribution of pattern books with designs that would appeal to foreign tastes. Kyoto-based textile producers were quick to grasp the importance of the words "fine art" when applied to products and quickly developed their own versions of what that term meant.

Initially these efforts were largely imitative--pictorial designs in heavy wooden frames under glass. By the late 1870s and early 1880s the major producers were engaging contemporary Japanese painters to make the cartoons for their textiles.

Some of these artists even supervised the production of embroideries to ensure the naturalism their works reflected were captured in subtle shading and padding used in floss silk stitching.

Tapestry woven designs worked in silk, rather than in wool as was the European tradition, were remarkable both in their subtle, painterly qualities worked on monumental scales. 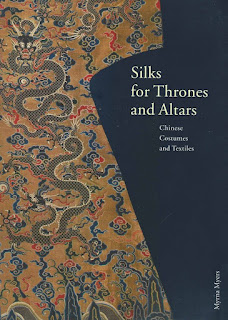 The adaptation of Western chemical dyes for patterning textiles transformed the dyeing industries. Colors could be painted on fabrics as if they were painting and set with single steam process.

Q: Part of the book looks at the interaction between artists in Japan and in Europe and North America during this period. Can you describe the impact each had on the other?

A: Japan's transformation from an isolated, feudal country into modern industrial nation in the decades between the 1860s and 1890s was rapid and complete, socially, politically and economically.

Publicly funded education stressed the skills necessary to succeed in an international world. Western style painting was taught in universities and academies: perspective, shading, Western materials were embraced. Some artists traveled to Europe to study.

Even Japanese style painting (Nihonga) done with traditional materials was affected by notions of realism and naturalism that were valued in the oil painting styles favored by the West. 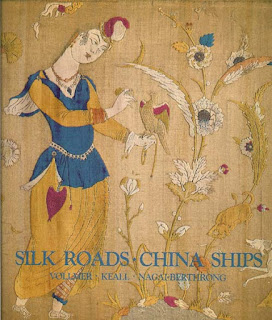 Q: How are these textiles viewed by experts today?

A: Until the last 10 years, most experts both in Japan and in the West ignored these textiles. Although they started to appear in the art markets of the West in the late 1980s, most were acquired by private collectors. There are pieces in European museums that were acquired in the mid-1890s.

With the exception of one piece at the Field Museum in Chicago, most examples in American museums were acquired by donation beginning in the 1940s. Some of these remained misidentified or rather forgotten until the research for the book began.

I think our book will open a lot of eyes and may help convince museums that textiles should be included with the Meiji period cloisonné, ceramics and furniture of the period that they now display.

A: I hope to find a museum willing to organize an exhibition of these magnificent textiles. They deserve to be seen and appreciated.

In the meantime I am working on a project with the Los Angeles County Museum of Art that is organizing an exhibition and catalogue of textile fragments from a private collection for 2018. I am also working with a textile artist on plans for a touring exhibition of his most recent work.

A: We have quite good documentation for three major producers--Takashimaya, Kawashima, and Chiso--all of which changed business models after World War I, but there are at least three or four other Kyoto producers for which archival research may be possible.

As with all publications, we hope new information we missed will come to our attention, and which will probably correct, embellish or add to the stories this book presents. Finding more pieces in public and private hands would be an amazing gift.