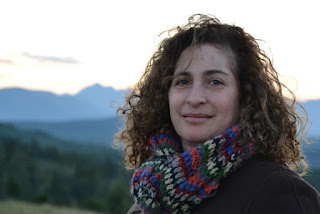 Helaine Becker is the author of the new children's book Monster Science: Could Monsters Survive (and Thrive!) in the Real World? Her more than 70 other books for kids and young adults include Worms for Breakfast and Zoobots. She also writes for kids' magazines and television, and she lives in Toronto.

Q: How did you come up with the idea for Monster Science, and how did you pick the particular types of monsters to include?

A: I was in a school library before a presentation, and noticed a display of books about monsters. They had titillating titles promising to explore the truth about each one.

On closer examination, they all turned out to be debunkers - the subtext was, "These monsters aren't real, you fool" ( or so I felt when reading them).

I found it deeply unfair. A kid picking up those books is looking for thrills and chills, not to be insulted and have their goosebumps squashed to boot.

So I thought, "Why not write a book that explores the topic of monsters in a way that addresses the questions kids have, but doesn't disrespect them? That lets them come to their own conclusions?" Monster Science was born. 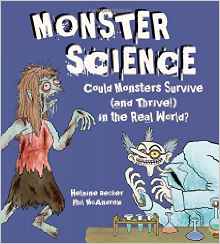 What I liked about the idea right off the bat was that not only does it present a lot of science information, but it also helps develop scientific and critical thinking. It says, "Don't accept what you are told by anyone - without evidence. And here's how to evaluate that evidence."

Q: This book features some legendary monsters and a lot of fact-based scientific information. What did you see as the right mix of legend and science as you were writing the book?

A: I wanted to explore the major features of each monster and present evidence to let kids decide whether each feature was plausible or impossible. It seemed logical to start with how these features originated - e.g., blood-sucking in the case of vampires, walking-deadness in the case of zombies - as part of the "setting of the stage."

Then, I looked at each key feature in turn, examining what current scientific research tells us about each topic. The results were always surprising.

A: I do most of my research on line, beginning with general sources, then moving to more detailed and authoritative ones, like research papers or academic websites, as I get a handle on the topic. I will also use email to get in touch with a scientist who's an expert on a particular topic if I need to. 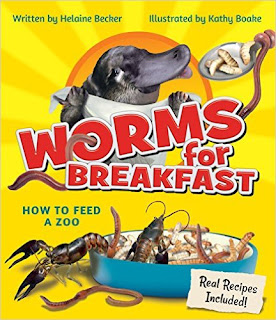 A large part of my job parallels what kids have to do when they do their own research - specifically, evaluating which sources are reliable, and which are just plain garbage.

On a topic like monsters, you can imagine how much garbage there is out there! It took forever!!!!! to stop pulling up revolting images of melting zombies etc. to find some solid data.

I always make sure I can cross-check each fact from more than one reliable source. If you only have one website that makes a particular claim, it might not be one you should rely on.

I always look at who my sources are, and make sure I ask myself the question, "What is the goal of this organization/company/institution in putting this information out there? Is it to make money? Is it to further a personal or political point of view (propaganda?) Is it to educate?

If you're after solid facts, you might not want to rely solely on information about vampire origins from a site called "Iheartvampires."

Q: Of all the monsters you write about, was there one that particularly captured your attention?

A: I have had some issues with vampires since seeing a terrifying episode of Gilligan's Island when I was four or five.

It featured a "comical" vampire dream sequence, but at that tender age I didn't quite get that it was supposed to be funny. I wound up sleeping with the covers up and over my neck for the next 30 years. So this chapter was kind of "personal." 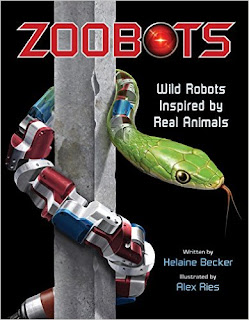 On a more serious note, the appeal of the vampire, I think, comes in part from its immortal nature. The information I found that related to this topic was extremely interesting to me.

I also found it delightful that, while a human-vampire could live on a largely-blood diet (with certain genetic adaptations), it would still need to eat its vegetables.

A: I'm putting the finishing touches on Lines, Bars and Circles: How William Playfair Invented Graphs. It's a picture book about the fascinating fellow who single-handedly invented the field of Infographics. It will be out in March  - from Kids Can Press.

I'm also working on a sequel to Zoobots called Hubots. Zoobots took a look at robots inspired by animal-inspired robots. Hubots will look at ones with more human characteristics. It will be out next fall.

A: Science isn't scary. It's fun! And so is Monster Science.