Dean Robbins is the author of the new children's picture book Miss Paul and the President: The Creative Campaign for Women's Right to Vote. He also has written Two Friends: Susan B. Anthony and Frederick Douglass. He lives in Madison, Wisconsin.

Q: Why did you decide to write a book for kids about Alice Paul and President Woodrow Wilson?

A: I’ve been obsessed with heroic figures my whole life. There were so many I wanted to be like when I grew up, and to this day my office wall is plastered with pictures of Abraham Lincoln, Louis Armstrong, Elizabeth Cady Stanton, and others who made the world a better place against all odds.

The desire to learn more about my heroes and tell their stories is one of the reasons I became a journalist. I’ve had a chance to write about them for newspapers, magazines, and public radio, and about 10 years ago I struck on the idea of featuring them in children’s picture books. It was thrilling to think of getting kids as excited about my heroes as I am.

After writing Two Friends: Susan B. Anthony and Frederick Douglass for Scholastic, I began thinking about other inspiring picture-book subjects.

One day I was talking with my niece about our favorite feminists—our idea of a good time in my family—and she reminded me of Alice Paul, who deserves a lot of the credit for helping pass the Constitutional amendment for women’s right to vote in 1920.

A: I figured there must be plenty of picture books about Alice Paul, given her importance in U.S. history. After checking, however, I found almost nothing. I couldn’t believe no one had told her dramatic story for elementary school kids. 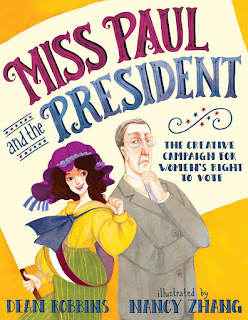 As I started researching, however, it didn’t take long to figure out why. There are some very difficult elements here for young children.

Paul waged a six-year campaign to convince President Woodrow Wilson, Congress, and the American public to support women’s suffrage in an age when women weren’t considered smart or sophisticated enough to trust with the vote. She planned parades, petitions, and protests to keep the issue front and center.

Most famously, she organized the first picketing of the White House. In other words, she creatively exercised her First Amendment rights.

So far, so good, but the U.S. government struck back hard at Paul and her colleagues. They were arrested, thrown in jail, and treated brutally, just for speaking out about democracy.

How do you explain this horrible bit of history to kids? Clearly, young children need to learn what American values are before coming to terms with the fact that we sometimes violate those values in shameful ways.

I know elementary school students grasp the idea of unfairness, as most of them have experienced it in one way or another. So I decided to emphasize Alice Paul’s efforts to make the United States a fairer place rather than dwelling on her mistreatment by the authorities.

Miss Paul and the President shows how she used an American citizen’s superpower—freedom of speech—to thwart President Wilson and others blocking women’s equality.

I hope the story’s triumphant outcome will make young readers proud of the United States. As Paul showed, this is a country where an ordinary citizen can use democratic means to make positive change.

Q: The third main character in the book is Wilson's daughter Margaret. What role did she play? 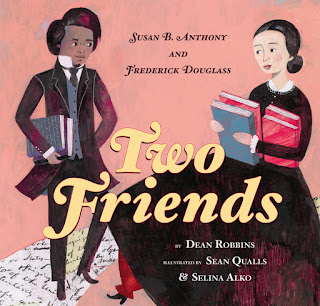 A: Margaret is not a well-known figure, but I included her in Miss Paul and the President because I found her position so intriguing.

As a young woman, she supported women’s suffrage while her father opposed it. That wouldn’t be easy for a presidential daughter even now, much less in an era when women’s independence was strongly discouraged.

In one telling moment—which I included in the book—she waved to the suffragists picketing the White House while she and her father drove past them at the gate. President Wilson usually pretended the picketers didn’t exist.

With pressure coming from his own beloved daughter, along with Paul’s relentless protests, how could Wilson continue to deny women their rights? He finally capitulated, a remarkable victory for both Alice and Margaret.

Q: How would you describe Alice Paul's legacy today?

A: After the 19th Amendment passed, Paul devoted herself to women’s rights for the rest of her long life. She authored the Equal Rights Amendment and fought for it into the 1970s.

After obtaining three law degrees, she drafted 600 pieces of legislation and saw about 300 pass. She got the United Nations to incorporate equality provisions in its charter in 1945 and also got a prohibition against sex discrimination in employment in the 1964 Civil Rights Act.

She surely deserves credit for paving the way for two women to run for the presidency this year.

Even though Paul is such an important civil rights figure, she’s been underappreciated for the past century. Happily, that’s beginning to change.

This year, the Treasury Department announced plans to put her on the back of the new $10 bill. President Obama recently designated a national monument in her name, and bipartisan members of congress are pushing to give her a posthumous Congressional Gold Medal.

She even showed up as a Google Doodle, the surest sign that she’s achieving superstar status.

A: I have another children’s picture book coming out next summer with Knopf, Margaret and the Moon. The book profiles the pioneering computer scientist Margaret Hamilton, who was instrumental in getting NASA’s Apollo missions to the moon in the 1960s.

It’s a little-known fact that her brilliant programming helped save Apollo 11’s historic lunar landing when disaster struck. This at a time when women were underrepresented in the sciences and so many other fields.

One nice thing about Margaret and the Moon is that, unlike my other picture books, it’s based on my interview with the subject. I didn’t talk with Susan B. Anthony, Frederick Douglass, or Alice Paul for Two Friends and Miss Paul and the President, as much as I would have loved to!