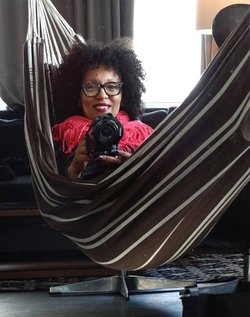 Sharon Pendana is the author of the book Secret Washington D.C., a guidebook to various sites in the capital city. She created the website The Trove, which includes interviews with a variety of creative people.

Q: How did you end up writing this guidebook, and how did you pick the places to include?

A: I was born and raised in Washington, D.C., but have lived most of my adult life in New York City. When my beloved mother became ill, I returned to Washington to care for her.

Full-time caregiving can be isolating and I had a throw-up-my-hands moment in which I thought I am happy to be here with and for Mom, but something's got to give to make me fall in love with my hometown again. (Be careful what you wish for, you just might get it.)

One of the assignments for a travel writing course I was taking was to choose a specific publisher and write a targeted pitch for a travel guide.  I browsed the travel section at Politics & Prose to see what some of the offerings were and found the excellent Secret New York from Editions Jonglez.

Intrigued by the title, I flipped through the pages thinking that if I was to write a travel guide, this would be the kind I'd want to write.  So I crafted a pitch for Secret Washington D.C. and sent in my assignment to the instructor, AnneLise Sorenson, who encouraged me to submit it to the publisher.

I did and awoke the next morning to an email in the affirmative from Jonglez.  I am really delighted to be a part of their wonderful "Secret" series of guides to international destinations. 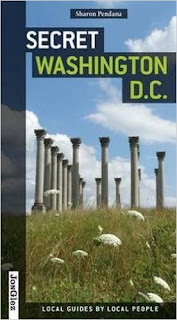 The series invites the reader/traveler to go off the beaten track in each city, so choosing the sites to include was like a treasure hunt, sleuthing out little-known or unusual spaces and places.

It was important to me to cover the entire city, not just our largest quadrant, Northwest (Though, due to its size it is the quadrant with the most entries in the book.) I also included a few sites within an hour of the city in Maryland and Virginia.

In a city filled with statues of war heroes on horseback, it was also important to me to be inclusive of other histories/voices--people with disabilities; the LGBTQ community; to touch on the city's diversity of ethnicity, race, and religion

Having attended primary school at Beauvoir (with your sister, Judy, coincidentally) in the shadow of Washington National Cathedral, I knew there'd be treasures in the gothic structure. The Darth Vader grotesque was the first thing I photographed for the book.

Q: How did you research all the places you write about in the book?

A: I utilized many of the incredible resources we have here, The Washingtoniana Room of the D.C. Public Library, The Historical Society of Washington, D.C., The Library of Congress, The Peabody Room of the Georgetown Neighborhood Library and The Museum of Health and Medicine to name a few.

I discovered a fascinating intersectionality between these resources. At the Historical Society, I held in a white-gloved hand the very assassin's bullet that pierced the spine of President James A. Garfield and read the hand-written note from the coroner who retrieved it.

Then at The Museum of Health and Medicine in Silver Spring, which is featured in the book, I saw on display the 12th thoracic, first and second lumbar vertebrae of the late president, with a tube inserted, marking the path of the bullet.

Q: What are a few of the things you learned that especially surprised you?

A: Touring the Blue Plains Advanced Wastewater Treatment Plant in Southwest was an eye-opener. Clean water coming out of the tap is something we take for granted, but getting an up-close look at the process to make that happen will make you rethink everything and your role in contaminating the Potomac.

I have, for example, mindlessly flushed unused prescription medicine. No more. Our toilet bowls are not garbage disposals.

Q: Let's say a visitor had a day to spend in D.C. What would you suggest as their tourism agenda?

A: In order to enjoy both indoor and outdoor time, here's a rather ambitious itinerary that will have you setting foot in each quadrant. Begin at the 8am opening of the underutilized treasure, The U.S. National Arboretum in Northeast, to see our "ruins," the Capitol Columns on the Ellipse Meadow and the magnificent Bonsai and Penjing Museum.

Next, head to Southeast for a ranger-led tour (schedule it for 10am) of the Frederick Douglass National Historic Site to marvel over the hilltop views from his home, Cedar Hill, and the extraordinary story of the man who escaped slavery to become a respected orator, abolitionist, and statesman.

Experience Native American cuisine with midday lunch at Mitisam Cafe at the Museum of the American Indian in Southwest, then head to Dupont Circle in Northwest for a 2pm tour of Heurich House, home of visionary brewing magnate Christian Heurich, once the largest private employer in the city.

Affectionately known as The Brewmaster's Castle, it is the first fireproof home built in the District. With contents original to his occupancy, it gives a glimpse of the lifestyle of affluent Washingtonians of the late-Victorian era.

And a must when visiting Washington, a city with a dominant Masonic influence, is a stop at the grand House of the Temple of the Scottish Rite of Freemasonry. Book it for 4pm for the last tour of the day.

It lasts for about an hour so if you are traveling by train, you'll have time to squeeze in a walk on the APA Roof Garden and Labyrinth across the street from Union Station before your departure.

If you are flying, simply enjoy the colors refracted from Bridge Tender's House, a public artwork by artist Mikyoung Kim on the 14th Street Bridge as you pass by en route to Reagan National Airport. Since operating hours are subject to change, please check the schedules of suggested sites before traveling.

A: I am publishing several new interviews to my site, The Trove, a treasury of stories of the fascinating people I encounter and the things they hold dear. I am honored that they share their lives with me.

I am also rebuilding our archive, which was unfortunately hacked last year. And there's an enchanted project brewing, but it's too early to discuss.

A: Each summer, The National Building Museum, a great place to visit at Judiciary Square, hosts a fun, interactive display amid the columns of their Great Hall in addition to their exhibitions. (Remember last year's sea of white plastic balls, known as The Beach?)

This year, it's Icebergs, July 2 -September 5. They have an excellent museum shop, one of my favorites in the city, and it just so happens to stock Secret Washington D.C.