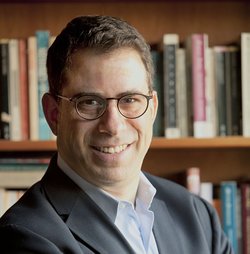 Ethan Michaeli is the author of the new book The Defender: How the Legendary Black Newspaper Changed America. He worked at The Defender from 1991-1996, and his work has also appeared in a variety of publications, including The Nation and The Forward. He founded We the People Media, a nonprofit organization, and its affiliated publication, Residents' Journal. He is based in Chicago.

Q: You worked at The Defender in the 1990s. What did you learn from working there, and why did you decide to write a book about the paper’s history?

A: I didn’t know anything about race in America, African American history, Chicago history, and the history of African Americans in Chicago when I got to The Defender. It all was a blind spot in my education….

The time I spent at The Defender was transformative…I learned about The Defender’s pivotal role in American history. I always felt it deserved a book. I started to get the ambition to write nonfiction, and no one else had told the story and it deserved to be told.

It came to me slowly. At times I thought it would be better to do a memoir about my time at The Defender, but at the end I thought the best way would be to walk the reader through the history of the paper.

Q: You begin the book with a preface set in 2004 featuring Barack Obama, then a senatorial candidate. Why did you choose that episode as the book’s opening section?

A: President Obama really is the end product of more than a century of organizing and planning and building on the part of the African American community in Chicago. From the earliest moments of African Americans coming to the city, they saw politics as a nonviolent way to win back some of the rights won in the Civil War and then taken away…

The project began in the early 20th century with Ed Wright, Chicago’s first African American committeeman. It is a party position, and actually was an official rank that you [needed] to get  into the smoke-filled rooms where they divided up jobs… 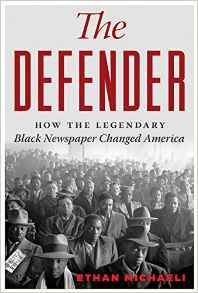 These were all signposts to launching Barack Obama as the ultimate expression of this political project. It’s good to start at the end and work your way back.

I would have written the book no matter what, but it’s true that President Obama’s election put the Chicago African American community on the radar screen of pundits and publishers.

Q: How would you describe the paper’s role in the Great Migration? What about the civil rights movement of the 1960s?

[Defender founder] Robert Abbott was born in rural Georgia and had a European-educated stepfather who gave him a great foundation in education. He went to the Hampton Institute and had a law degree.

He was exceptionally well qualified, though because he was African American, was from the South, and had a dark complexion, that prevented him from getting work…

He knew the labor unions in Chicago were discriminating against African Americans. He didn’t see much point in masses of African Americans coming from the South to the North, because there wasn’t much opportunity for them. Many worked on the trains or in service or in the red light district. These were not big employers.

Then World War I changed things. The number of European immigrants stopped, and the demand for American products surged, especially foodstuffs and factory goods.

They needed workers, and an easily available labor force was African Americans in the South. Abbott still didn’t support it because there [also] was a need in the cities in the South.

What changed is that Abbott saw that the departure of skilled workers from the South hurt the South. He saw a report about stevedores from Jacksonville, Florida, who left to work at a port in New Jersey. The white managers could not replace them, and couldn’t train workers fast enough.

When Robert Abbott saw that, that it was going to hurt the South, that’s when he began to write editorials, and said, come to the North, Chicago in particular, [using this] as a weapon against Jim Crow…

It became enthusiastic about Martin Luther King [during] the Montgomery Bus Boycott. It saw him as a perfect spokesman…The Defender was defending him before other media; it kept him alive [during the early] movement.

It kept them honest and on point. Defender reporters were there side by side with white reporters from The New York Times and The Boston Globe. They helped to define the coverage.

They were there to chart the signposts of the movement. When Black Power became a significant force, The Defender noted its arrival. On the editorial page, they said…Let’s give them support. A few months later, they said, OK, start to refine your message, keep the momentum going.

The Defender played a nuanced role in the civil rights movement. The movement was a set of organizations operating in a new space, between the standard political world and the world of civic organizations.

Q: How is the paper doing today, and what would you say is its legacy?

A: The paper today has a very small circulation. It’s back to a weekly—about 5,000 circulation. It still punches above its weight class. At moments when people are hungry for the perspective of the African American community, the paper gets a surge of interest and its editors are brought into other media as spokespeople.

It’s challenged because it doesn’t have the resources it needs, and its staff is stretched, but that’s always been true.

The African American community in Chicago remains as politically astute and organized as it has been. In the last election, African American voters threw out a prosecutor who had done a lousy job prosecuting police accused of abuse. The Defender knew that was coming and was part of that editorially.

They knew the Bernie Sanders campaign had not made sufficient inroads into the African American community, and knew he wouldn’t do well in Illinois. Illinois was a bellwether, and showed there was no way any candidate could win without getting the African American vote, which is decisive in a Democratic campaign.

The current editor and publisher are working very hard to keep the legacy of the paper and its reputation intact.

The legacy is broader. It includes individuals and family members who have graduated from The Defender and benefited from being a part of it.

A: I’m just about finished with a proposal…It will be different, on a broader, more international level, but still focusing on what happens to people when they’re oppressed and flee somewhere and make a place a bastion of resistance.

A: I’m super-grateful to everyone—the book’s had a nice response, and I’m especially grateful to former staffers at The Defender who have come out to support the book and come to events and contacted me. I’m so moved by that.

My biggest hope for the book is that I would get it right for them. It was a special, amazing place to work. According to the ones I’ve spoken to, I did, and I’m very appreciative!