Michael P. Balzano is the author of the new book Building a New Majority, which focuses on the role of working-class voters. Balzano worked in the Nixon White House and served as a strategist to the Reagan and George W. Bush campaigns. He dropped out of high school and worked as a garbageman and apprentice lens grinder before eventually earning a Ph.D. He is based in the Washington, D.C., area.

Q: You write, “My simple conclusion was that, from Nixon through Romney, those [Republican] candidates who reached out to the working classes won elections, while those who did not lost.” Which recent Republican president would you say was the most in tune with concerns of working-class voters?

A: From my experience both working with and for Richard Nixon, and my discussion with labor people over the last 40 years, clearly Nixon was the one seen as very, very close to the working class.

Some of the reasons: First, working-class people in America are very socially conservative. They attend church, they pray before meals, they’re genuine. The working classes I’ve spoken to believed Nixon shared their social values, and he clearly did.

Second, they believed Nixon shared their views on the work ethic: If I work hard, I’m going to succeed.

The third reason is that Nixon shared their views on patriotism, the belief in a strong national defense. They supported him in his exit from the [Vietnam] War. The college kids don’t go to war, tradespeople do.

Nixon respected workers, regardless of the views they held. He held garbage workers in high regard and they felt that.

The working-class ethnics of World War II—Poles, Slavs, Greeks—with relatives behind the Iron Curtain, believed Nixon cared about their relatives, and wanted to free them, [especially] the Poles.

Nixon also was regarded as one of humble origins. He wasn’t poor, but he wasn’t Rockefeller. They saw him as one of their own who made it.

When I talk to labor people in the last three years, I ask which of the presidents would you like to get back. They don’t mention Reagan. They mention Nixon and Kennedy...Both were good to unions.

Another element in this is that when they looked at Nixon, Reagan, Kennedy, they viewed them as people who had balls. In Reagan’s case, he exhibited what they saw as a John Wayne cowboy, nobody’s going to push me around [attitude]. They admired that. I’ve been in union meetings where people were punched out.

Nixon and Reagan were trusted by the working class. They didn’t feel, This guy is looking down on me. Rockefeller gave the same impression to them, even though he was rich. We don’t have that any more. 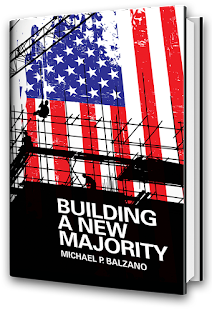 Q: You write in the book of the “tendency for Republican presidents not to maintain relationships with those workforce representatives to whom they appealed and whose votes they won.” What are some examples you experienced of this phenomenon?

A: This book is extremely critical of the Republicans on a number of scores. One is, you don’t know how to communicate with people. Another, you don’t keep your promises. In Reagan’s case, he put it in writing.

Republicans are not political. How is it you can appeal to working class union people to vote for you, and they cross the line [and do so], and what do you do?

The example: First, during the Depression, two Republicans, Davis and Bacon, passed a law that would say, if the government is going to build something, we don’t want you to cut the wages of the people in my state.

Davis-Bacon required the government to pay the prevailing wage for the building of any government product…What happened with Davis-Bacon is that people would go into a state five states away, set up a tent city, bring in workers, with lower pay, they wouldn’t pay the wage.

The government passed a law that said to [abide by the Davis-Bacon law]. What happens is that the prevailing wage generally works out to the union wage. It’s not a payoff to the unions but a recognition that skills require a wage [commensurate] with the skills.

Every Republican thinks, Repeal the Davis-Bacon Act. If I’m a Democrat, and I vote for Ronald Reagan, Ronald Reagan gives me a promise that he is not going to touch Davis-Bacon, but the secretary of labor decides to get rid of it. Why would he do that? A whole bunch of people joined your party.

Here’s another example. If Trump wins the election, people including the speaker of the House, will say, Repeal Davis-Bacon…

The Republicans can’t wait to kill it. Without the Jones Act, we would have no merchant fleet.

The Export-Import Bank doesn’t give them money, it guarantees loans. It’s interpreted by Republicans as corporate welfare, but we’re not paying for it, we’re guaranteeing the loans…

Another part of that: The most important issue right now in this country for Democrats is a great dilemma--the Democratic Party historically does not support defense spending. They fall to the social side of the ledger. We have cut the defense budget so bad in the last eight years…

Within the AFL-CIO, the industrial-base unions know if they vote Democrat, they’re going to lose their jobs. However, if they vote Republican, the Republicans are going to try to repeal laws that protect wages. I’ve spent my life trying to explain these simple differences in how do you build a party?

Look at the section [in the book] where Ronald Reagan went to the National Maritime Union convention, of seamen who had just endorsed Jimmy Carter. He didn’t keep his promises, but [they] said, Let’s support him. Reagan went to the convention and promised he would never cancel the Jones Act and would build the American fleet again. They reversed their endorsement of Carter and endorsed Reagan…

Q: In the book, you write about the air traffic controllers’ strike during the Reagan administration. What was your role during that period, and what do you see as the legacy of that strike?

At the same time, the unions had every right to strike because they had written promises by Reagan that they would have their day in court to talk to the administration.

I and Admiral [Robert] Garrick helped the union structure their letter to the candidate on what their expectations were with this endorsement. The two of us carried the letter to [campaign manager] Bill Casey….

At that time, air traffic controllers were working 60 hours a week. Worldwide, it was 35 hours. We had equipment that died on us, screens that went black, but we couldn’t get into the White House…Reagan promised he would put somebody at FAA who would understand, but they brought in an anti-union guy…

Q: Who is likely to win the support of most working-class voters in this year’s presidential election?

A: What I’ve been telling people is that I believe Trump has become the spokesman for issues that are affecting working-class people. I talk with unions all over the country, and in my conversations with working-class groups, I glean that they feel they are victims of the political correctness of the Democratic Party.

However, they believe they would do no better with the Republicans. They don’t trust either party. They are convinced government can’t fix anything.

They believe their jobs have been sold out--if I were 50 years old, I would build a whole company on this—by trade policies that do not favor America. They also believe they were sold out by regulations that shut their industries down.

Republicans don’t know how to take advantage of that, and how to educate the workforce. [Working-class people] believe political parties have failed them professionally and destroyed their hope for the future. They want their country back, and believe they have lost the whole thing. Trump’s collision with the Republican Party—they love it…

Today, the working class is hurting and they don’t mince words. Neither does Trump. This is the reason for his popularity with the working class. Unions have checked him out and he uses Davis-Bacon labor. They believe he’s one of them.

That’s my view of it…It goes deeper than Republicans and Democrats, it’s the soul of the people.

A: Three of the most powerful CEOs in the country have read the book, and all are stewards of society who have dedicated their lives to helping the poor.

They said, Michael, you must write a book on the first chapter [about my experiences as a young man]. You need to tell high-school dropouts, You’re going down the wrong road, and let me tell you how to avoid it. If you, at 21, read at a first-grade level and got a Ph.D. in classics, anybody can do it.

I’ve got two chapters pretty much done, and I see the book as five chapters at most, very short.

The last thing is I’m speaking before state Republican organizations seeking an understanding of what we’re doing wrong.