Janine Joseph is the author of the new poetry collection Driving Without a License. Her work has appeared in a variety of publications, including Kenyon Review Online and Hayden's Ferry Review. She was raised in the Philippines and California, and now lives in Stillwater, Oklahoma, where she is an assistant professor of creative writing at Oklahoma State University.

Q: Your collection focuses on the issue of immigration. How was the book’s title chosen, and what does it signify for you?

A: I’ve talked before about how long it took me to write Driving without a License—how it began, 15 years ago, as a (failed) novel and how the more I wrote, the more the story I was trying to tell began to fracture. Every fracture let in a little more light, which prompted me to see the manuscript differently each time.

For a long time, I thought the book would be called Human Archipelago, and when I submitted it to the 2014 Kundiman Poetry Prize, it was titled Overstay. For a year, it was called Extended Stay. Once, for about a week, it was called A Thousand and One American Nights. It was called That Name for a spell, too.

These titles, for me, are evidence of the number of times I thought the manuscript was finished. In this way, the title Driving without a License is as much an illuminated map of the book’s journey as it is both a title of admission and defiance.

Q: Some of the poems include quotations from politicians, newspaper articles and immigration documents. Why did you decide to include those, and how did you select the material you included?

A: During my senior year of high school, when I found out that I was undocumented, I began scouring places like the Los Angeles Times for articles about immigration and the experiences of other undocumented immigrants in America. 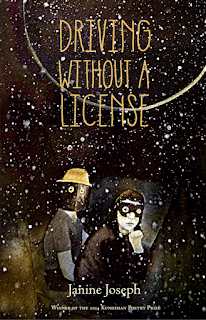 I was looking for community, for a solution. In a way, I was also learning about who I “was” in the eyes and of America—and, to some degree, had internalized this new identity and narrative.

I clipped and saved every article in a hot pink, plastic folder, but I rarely ever had to return to them when writing the poems in Driving without a License. I was writing about my life, after all, and not using the gathered material as research for an imagined character.

The quotations from politicians, newspaper articles, and immigration documents, among others had become a part of me—of the language and dominant narrative that I was actively resisting, rejecting.

When I’m plagued by an earworm, I often have to sing the song out loud in order to rid myself of it. Much of what I included in Driving without a License were those destructive earworms. I had to confront and subvert them to feel free of them.

Q: Given that immigration is a major topic in this year’s presidential race, what do you foresee looking ahead, and will you continue to write about this topic?

A: This is a great question—and one that people ask me often in conversation. Here’s what I point out: I watched the first iteration of the DREAM Act fail in 2001. In 2001. Here we are, 15 years later.

All of those newspaper articles I clipped or printed and then later saved taught me one thing: immigration, particularly what to do about our “broken immigration system,” is a major topic any time someone wants to get elected—as if undocumented people aren’t having to live their realities every single day, not just during an election cycle.

There are two quotes by Toni Morrison that have and will continue to speak to me as I move forward with my privileged, post-naturalization life: 1. “Freeing yourself was one thing, claiming ownership of that freed self was another,” and 2. “I tell my students, ‘When you get these jobs that you have been so brilliantly trained for, just remember that your real job is that if you are free, you need to free somebody else. If you have some power, then your job is to empower somebody else. This is not just a grab-bag candy game.”

Q: How did you decide on which poetic form to use for a particular poem?

A: My studies on poetic craft included learning about and practicing old and new forms—my teachers gave me these forms to put in my toolbox, if you’ll forgive the clichéd metaphor.

Sometimes, sitting at my computer, I am faced with a machine screw with a Phillips head. Sometimes, I reach down into the engine of my brain and feel around, not knowing what I’m working with unless I can aim my flashlight just right.

When I know what I’m working with, what tool I need, I reach into my toolbox. Sometimes, I don’t know which tool to use until I exhaust every tool in the box. Sometimes, the tool I needed was in my back pocket all along. I don’t, in short, often begin with the tool in hand.

A: In 2008, I was involved in a rear-end collision at a stoplight by a sedan going around 50-70 mph on a semi-residential road.

The impact was so great that the entire back seat of my father’s car was dislodged and his door was the only one that would open when the paramedics came to rush us to the hospital. My father suffered a hairline fracture on his collarbone, in addition to bruising; though I did not appear to hit my head on anything, the crash shook my brain in my skull.

It’s still too early to be able to share all of the details about this next project with confidence, but I do know that I am wrestling with this event and my subsequent post-concussive memory loss. A few poems have already been published in the Academy of American Poets’ Poem-a-Day, Waxwing, and La Fovea.

A: This summer, I am moving from Ogden, Utah, to Stillwater, Oklahoma, where I have accepted an Assistant Professor of Creative Writing position at Oklahoma State University!