Barbara Bradley Hagerty is the author of the new book Life Reimagined: The Science, Art, and Opportunity of Midlife. She also has written Fingerprints of God. She was a correspondent for NPR for almost 20 years, and she also worked for The Christian Science Monitor. She lives in Washington, D.C.

Q: You write, “Midlife has gotten a bum rap.” Why did you decide to write this book, and what are some of the most common perceptions and misperceptions about midlife?

A: I wrote the book because I was about to have a midlife crisis. It was right after my mom had a stroke. She's a very close friend and my moral compass, and now it was possible she wouldn’t speak again. It was unnerving. It made me think about mortality. Then my dad died, and I really thought about it—I was in the hospital with a heart attack scare when he died. It made me realize [my generation was] the next to go.

The real precipitating cause for the book was when my mom had the stroke. I was very saddened at the thought that she may never speak again. I came home from the ICU. It was a beautiful spring day, but I felt absolutely nothing. I felt completely flat. I looked at my husband and said, I think I’m having a midlife crisis. He said, Don’t do that.

The next day I started to research midlife crisis—was I having one? How do you thrive when you don’t have the energy you used to have and things feel harder? At some point you feel life is harder and you can’t fake it any more.

The reason midlife crisis gets a bum rap—early on in my research I realized this thing called a midlife crisis came out of an obscure journal. It was based on [a doctor’s] clinical patients--they were not all that happy—and on so-called geniuses. A lot committed suicide in their late 30s. What happened in your late 30s to make you feel that way?

After Gail Sheehy’s Passages, there was the idea that everyone was supposed to have a midlife crisis. In fact, only 10 percent of people have this existential angst. Most of us are OK.

Life is hard in your 40s. People do suffer a dip in happiness. You are unhappier in your 40s and early 50s. There are responsibilities at work, aging parents, kids at home, [you’re] tired. If you wait long enough, some of the responsibilities lift, and you [shift] your priorities and you go up that U-curve of happiness.

What I realized early on is that there’s no such thing as a common midlife crisis. While most of us suffer a dip in happiness, most [improve]. 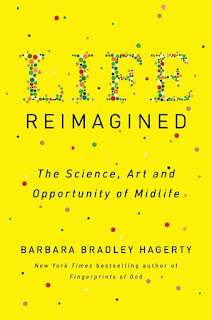 Q: Throughout the book, you write about your own experiences. What do you feel you learned about yourself from writing the book?

A: I had never journaled before. What I did [for the book] was I wrote in a journal three times a week. There was a huge amount of research and interviews. I would make pictures, write about scenes. If I went to U-Va. to get a brain scan, I would write about it so it would be fresh, about how the research was affecting me.

It’s easy to go on autopilot. I was on autopilot….I wasn’t thinking hard about how to make my marriage deeper, how to engage in the writing process, how to be a better stepmom. Life becomes richer [when you do]. The year and a half I was recording, life slowed down and became more meaningful…

[For my research,] NPR sent out a note on its Facebook page: How’s midlife treating you? We didn’t ask for bad stories or good stories. I got 700 emails in a few hours—masterpieces of the good, the bad, and the ugly.

Most people were really happy in midlife. They would not go back to being in their 20s—you may be beautiful, but you’re anxious. By midlife you know yourself well enough to know what you’re good at. You’re more settled. People were a lot happier than I thought.

Also, I saw this theme: People who do well at midlife make a pivot away from the dreams they had that didn’t come true. One reason for the dip in happiness is you realize you’re not going to be the CEO or a Pulitzer Prize winner.

It was an important insight I needed to learn and am still learning. How do you let go of that dream?

Q: This leads to something I was going to ask you--you write that people should choose purpose over happiness. Why is that, and what does finding a purpose mean for one’s life?

A: Purpose is the Cinderella of psychological traits. No one noticed it for a long time, and now everyone realizes that having purpose keeps you happy, healthy, and keeps your memory intact.

Psychologists and biologists don’t know why, but suspect that if you choose a purpose—something larger than yourself—if you lose your job, you still are invested in something worthwhile, and you tend to be healthier. 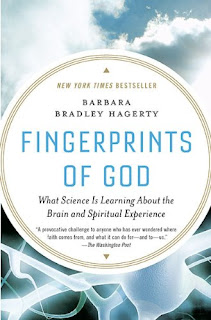 My favorite study in the book was about purpose and escaping the symptoms of Alzheimer’s disease. The study followed people from their early 60s to the end of their lives, and every year they would give them a cognitive and psychological test.

The thing they did differently is these were people who had a high purpose in life, a reason to get out of bed. They retained memories two and a half times better than people without a purpose in life.

Something that dramatic, that allows you to escape the symptoms of Alzheimer’s, is something I want to do. This was huge for me. It doesn’t have to be world peace or eradicating hunger. It can be babysitting your grandchildren, or helping friends out, or a hobby. For me it was cycling. It can be a little thing that gets you up in the morning.

Q: How have images of midlife changed over the decades?

A: What’s happened is when people hit midlife they still feel young, and when they hit old age they don’t feel old, they feel they’re in midlife. Midlife changed from 40-60 to more like 45-65.

This is partly because many baby boomers—there are huge exceptions to the rule, people who are unemployed or less educated—but most baby boomers are healthier, engaged, not old, they don’t want to be thought of as old. It’s changing our notion of what middle age and old age is. I don’t plan to be old until I’m about 80, or maybe 75!

[However,] there are people who are really struggling, and spikes in the suicide rate. These are tragic things. It tends to be people who are less educated, which makes it more difficult to have meaningful work.

A: I’m figuring out the next book. I’m doing a bunch of magazine pieces and trying to figure out the next large project. Once you settle on a book, you’d better like the topic! I want to make sure it’s the right topic…

A: There were two surprising chapters. One was about the absolutely essential nature of friendships. Studies have shown that friendships are better for your health than family, because you can choose your friends.

Midlife is a time when people let friendships drop, because they’re busy. But you need your friends. The science shows that isolation kills you like smoking 15 cigarettes a day, and that friendships save you.

The other lesson is the importance of finding a little purpose—a hobby, something that’s yours…it leads to friendships, too. These hobbies are good for the brain, and for your physical well-being…if people can try to develop [these lessons], they can be so happy!