Beverley Naidoo is the author of the children's book Who Is King?: Ten Magical Stories from Africa, a winner of the 2016 Children's Africana Book Awards. She has written many books for adults and for children, including Journey to Jo'burg and S is for South Africa. She grew up in South Africa and is based in the U.K.

Q: How did you come up with the idea for Who Is King?, and how did you select the stories to include?

A: Animals feature strongly in traditional African folktales and I grew up enjoying many such tales as a child in the 1940s/’50s. However, in books they were often accompanied by stereotypical, offensively racialised representations of black Africans.

In colonial literature for children, it was common for animal characters to be humanised and attributed with a humanity that was denied to black characters, the real people.

Indeed, one of the reasons I focused during the first 20 years of my writing career on realistic fiction was to write the kind of books that I never had as a child. 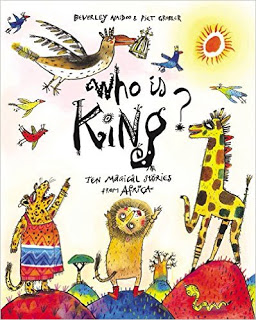 It took Julius Lester’s fine rendering of The Tales of Uncle Remus (beautifully illustrated by Jerry Pinkney, Dial Books & Bodley Head, 1987) for me to realise that Brer Rabbit had his roots in Africa and the same little trickster hare tales that I had loved as a child.

I knew Lester as a powerful writer of realistic fiction about African American experience and his Foreword to his Uncle Remus got me thinking more deeply about the purpose of these ancient folktales.

Nevertheless, writing has its seasons and it was a while before I returned to thinking about that little trickster hare. With The Great Tug of War and Other Stories (Frances Lincoln, 2006), I had the good fortune to be introduced to Piet Grobler as an illustrator.

I was a Jo’burg “city girl” and Piet was a “farm boy” from the bushveld. I loved the quirkiness and mischief in Piet’s drawings.

A few years later we collaborated on Aesop’s Fables (Frances Lincoln, 2011), transporting them to a South African setting. From there, it seemed a natural step to broaden the canvas to retelling tales from across the continent of our birth, as in Who is King?. 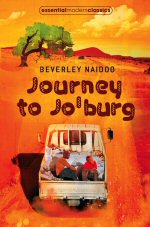 As a young adult, in exile from apartheid South Africa, I voraciously began reading contemporary literature by African writers... and now, grey-haired, I’ve allowed myself the pleasure of roaming through tales from north, west, east and south of this huge diverse continent.

How did I select the tales? Their sources are varied, with many of them collected, by others, directly from storytellers. But apart from wanting to reflect diversity of geography and characters, I looked for tales that made me laugh, raise an eyebrow, sit up straight or touched my heart.

Q: Do you see any similar themes running through the 10 different stories?

A: African folktales invite us to talk about how characters behave.  If there is any uniting theme, it is simply that humans, as well as the animals who behave like them, are capable of being mischievous or kind, foolish or wise, jealous or generous. Life requires that we use our wits... and woe betide those filled with self-pride!

Q: You’ve mentioned Piet Grobler—what did he bring to the illustration of this particular book?

A: I’ve mentioned earlier the quirkiness and mischief in Piet’s illustrations. Underlying these qualities is a strong humanity that reflects the wisdom in these tales. 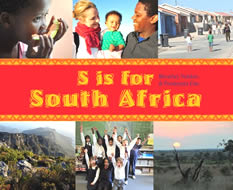 For instance, in the tale “Unanana and One-Tusk,” a scary rogue elephant swallows the children of a poor widow who then bravely recovers them. Piet’s humour offsets the goriness, as disaster turns to delight. Thank goodness.

Q: You've written for a variety of age groups. Is your writing process different depending on your audience?

A: My writing process - and the stages through which I need to go - varies depending on the task in hand rather more than the age group. Creating a novel is a very different task from retelling a folktale, indeed a much longer and more arduous journey.

It’s interesting to reflect that many traditional tales are essentially cross-age, originally being told to adults with children probably listening in. Whatever age I am writing for, I want to tell the story as vividly as possible.

A: Sorry to be mysterious, but it’s currently under wraps. All I can say is that I feel a bit like the city-girl Marika in my story “The Dare” in Out of Bounds when she is tasked with capturing flies to feed a one-legged chameleon that the farm children have trapped. That one-legged chameleon is depending on her and those flies are pesky.

A: I hope that I shall be more successful than Marika.