Q&A with Janet B. Taylor 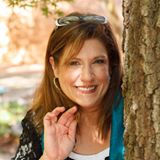 Janet B. Taylor is the author of the new young adult novel Into the Dim. She has written for CBS's fan site and interviewed authors for the Historical Novel Society.

Q: How did you come up with the idea for Into the Dim, and for your main character, Hope?

A: [I thought,] “I’d like to see what would happen if you took a modern teenager and thrust them into the Middle Ages, and see how they would deal with it."

As far as Hope goes, I had her in mind for a long time. I adore all those awesome kick-ass heroines in literature nowadays.

But...most of us are not sword or martial art experts, trained since birth to be killers. Many of us at that age were awkward and socially inept. Hope is all that, plus a big old bunch of phobias.

The only thing she has going for her is her brain, and I think that's probably true for most of us, don't you? 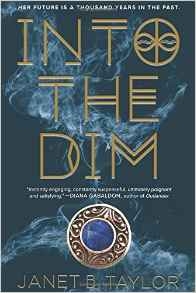 A: I first wrote Dim as a total pantser! I had no idea what I was doing, and had no idea how it would end. So most of it was as much as surprise to me as it is to the readers--ha!

Having said that--I will never, ever do that again! It nearly killed me. So for Book II, I did a lot of planning!

A: Diana Gabaldon, of course. She's the undisputed queen of time travel and I will be forever grateful to her for the lovely endorsement.

And a lot of other hisfic authors like Sharon Kay Penman, Elizabeth Chadwick, Kate Quinn.

And then there are the major YA authors like Susanne Collins, J.K. Rowling, Lois Duncan, Madeleine L'Engle.

A: I just finished the final edits on the second book in The Dim Series! So excited about this one! Hope and the gang are on the move again, and this time it's to a brand-new place and time period. It was a lot of fun researching this era, and I can't wait for the title and cover reveal, which is coming up soon!

A: Just that I am so, so grateful to all the amazing readers out there who've read Into The Dim, and Tweeted or emailed or Facebooked me to tell me how much they loved it! That means the world to authors.  It makes all the hard work worthwhile!