P.J. Brackston is the author of the new mystery novel The Case of the Fickle Mermaid, the third in the Brothers Grimm mystery series featuring a grown-up Gretel (of Hansel and Gretel) as a detective. Her other books include Once Upon a Crime and Gretel and the Case of the Missing Frog Prints. She lives in Wales.

Q: In the latest Brothers Grimm mystery, Gretel and Hans end up on a cruise, searching for mermaids. How did you come up with the idea for this installment in your series?

A: I imagined a cruise was something that would really appeal to Gretel. In my fantasy version of the 18th century I pictured opulent cruise liners, full of luxury, taking the well-heeled and the indolent on marvelous, indulgent voyages. Of course, what Gretel ends up with is not quite that!
Once I’d got the idea of a cruise I had a wonderful time researching the best bit of sea for her to sail upon. The Fresian islands are beautiful, fascinating, and have plenty of folklore and fairy-tales of their own.
Using a ship as the main setting for most of the action also sent my imagination in a piratical and seaward direction, which made a nice change from Bavaria. After all, one of the best things about being a writer is that you get to travel to all sorts of marvelous places with your characters.

Q: What do you see as the right blend between the modern references and the fairy-tale era conventions in these novels? 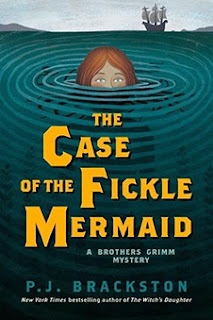 A: I wanted to be playful with the conventions of writing historical fiction. The fairy-tale element gave me the freedom to reinvent things and change things. Or at least, that’s the way I see it!

I do write more conventional historical fiction (as Paula Brackston), which I enjoy, but with this series I wanted to be a bit more adventurous. Purposefully putting in anomalies and anachronisms is a risky strategy, but I think it can give a story a truly original and individual feel.

Also, the traditions of fairy-tales are very broad. Some are more “realistic” than others. Many are common to different cultures and languages so have fundamental differences even though the essential story is the same. I think they are the ideal stories with which to be daring in form and style.

Q: The Gretel novels are very funny. Do you think fairy tales in their original state involve humor, or not really?

A: Some of them certainly had a dark (dare I say grim?) humour! What one person/country/culture finds amusing will leave another untickled, particularly where cruel humour is employed, so it’s impossible to judge how funny a piece of comic writing will appear to anyone other than the person who wrote it.

I like the way fairy tales often use humour as a contrast to the more frightening parts of the story. Many of the characters themselves are comic, to sort of offset the often scary message in the story. 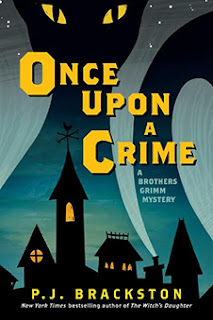 For example, stray from the straight and narrow (or step off the path/enter the dark woods) and you will fall in with bad people and come to harm (risk being cooked and eaten by a witch/wolf/whatever). This is a warning for children and adults.

In some versions of the original Hansel and Gretel tale, the witch is burnt up in the oven, in others the children escape without killing her. Earlier versions tend to be more brutal.

However, the most frightening thing for children would surely have been that their own father/mother/stepmother could have abandoned them in the first place. By making the witch a caricature with comic characteristics the violence and threat from strangers was damped down. Nothing was done to reassure children about feckless parents, though!

A: In the UK we don’t strictly have a “mystery” genre, so this is a tricky question for me. I don’t read hard boiled or violent crime books. There are some fantastic authors who work with those subjects, but it’s not for me. I do like cosy crime and find MC Beaton’s books hilarious.

I prefer mystery to be a part of the story, rather than its main function, so I read a lot in other genres too. I do love a historical setting or element. I recently enjoyed The North Water by Ian McGuire (which is certainly not cosy!) and Elizabeth is Missing by Emma Healey. I highly recommend both books. 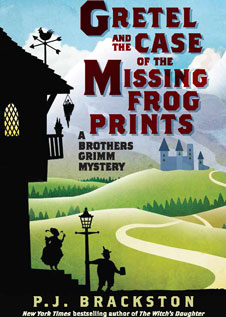 A: I’ve finished the fourth book in the Detective Gretel series. They are books I have such fun writing. They say you shouldn’t laugh at your own jokes, but it does make me chuckle spending time with Gretel and Hans, so I’m really happy to write new adventures for them.

Now I’m turning my attention to another Paula Brackston historical fantasy. I enjoy the challenge of writing in different genres. Keeps me on my toes!

A: I love surrounding myself with things connected to my stories and my characters when I’m writing. I don’t go quite as far as wearing a wig like Gretel’s but I pin up pictures of ’em, as well as putting on music of the time, and I eat a lot of Lebkuchen. All in the name of research!

If readers see a picture of a dress they think Gretel would have worn, or a house that could be found in Gesternstadt, I’d love to see it. I can be reached on my website, which has a Gretel trailer as well as information about the other titles in the series.