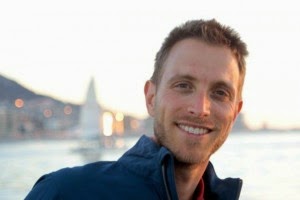 Roberto Trotta is the author of the new book The Edge of the Sky: All You Need to Know About the All-There-Is. It explains the history of the universe--and related concepts--using only the 1,000 most common English words. Trotta is a senior lecturer in astrophysics and a theoretical cosmologist in the Astrophysics Group at Imperial College, London. He lives in London.

Q: How did you come up with the idea for The Edge of the Sky, and why did you decide to use only the most common 1,000 words in the book?

A: The idea originally came from a cartoon on xkcd, a website, [started by] Randall Munroe, who wrote the book What If, that publishes cartoons based on physics, very nerdy geeky subjects.

At one point, [the site had] one cartoon that was a picture of the Saturn V moonrocket, but it was called Up Goer V because [Saturn] wasn’t on the list of 1,000 words.

Somebody created a website [based on] the 1,000 words. I tried it and found it interesting. I tried to see if the “all-there-is,” the universe, could be used in this type of language, if a book would be possible to write. It turned out to be possible, just!

Q: How did the 1,000-word limit affect your writing and also how you thought about the concepts you were describing? 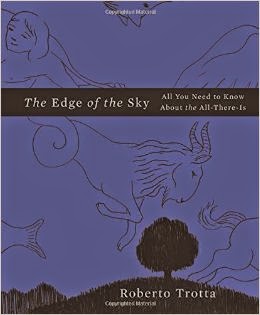 A: Very much, yes, it affected the thinking and the writing very much. Writing this kind of book is not like translating in the usual way I write about concepts, but like speaking a different language, in a pictorial, metaphorical way. The concepts I thought I knew, I had to rethink. The format brings about a sea change.

What I really wanted to achieve was to try to do it without compromising the scientific accuracy of the concepts. Every metaphor I came up with, I wanted to check against my knowledge of the science. It was important to me that it was as accurate as it could possibly be. It’s metaphorical, symbolic, a little playful, but it has to be rooted in the science.

Q: As you were writing the book, who did you see as its audience?

A: The book was experimental. It started as an experiment for myself, to see if it would work at book length. I wasn’t writing it for the public at first, but for myself. In the end, when I look back at it, I think of it as a book for everybody …it’s for children of all ages.

A: I’m very much hoping they will learn something about the universe, but not in the standard way. If they can take away a sense of wonder and poetry about the universe, the wonder of how we understand it through science, the deep mysteries and the big steps we’ve taken to understand the mysteries, then my aim is achieved. I want people to come away with a new sense of the universe around us.

My answer is, yes, I have given myself an arbitrary [set of] rules, but at the end of the day, I am not interested in the rules themselves. My purpose is not to explore this list of words or other lists of words, but to [see] what would emerge.

It’s not about the constraints, but about what would come out. There is arbitrariness, but that’s part of life! That’s not the point. The point is what it does to language and our view of the universe, if you’re given a straitjacket to work in.