Elizabeth Enslin is the author of the new book While the Gods Were Sleeping: A Journey Through Love and Rebellion in Nepal. Her work has appeared in a variety of publications, including The Gettysburg Review and Crab Orchard Review, and she lives in northeastern Oregon.

Q: How did your roles as family member and anthropologist complement each other as you initially spent time in Nepal, and again as you worked on this book?

A: I didn’t always experience those roles as complementary, at least not in the moment, but I gained some of my best anthropological insights by belonging to a family in Nepal. Embedded deeply in the culture, I learned about things I might not otherwise have explored.

For example, although theoretically concerned with women’s lives, I had little interest at the time in studying pregnancy or childrearing. Yet, of course, those tend to be a huge part of women’s lives. Becoming a mother within a family in rural Nepal and facing some of the same challenges that women of various castes and classes face there opened me up to a more multidimensional understanding.

However, being so close to it all also gave me some blind spots. Experiencing sexism and casteism personally hurt so much at times that I found it hard to ask questions to probe more deeply.

But over the years, being a mother to a Nepali-American son has inspired me to keep asking questions to learn more about what I couldn’t see so well (e.g., religion) when I lived there. 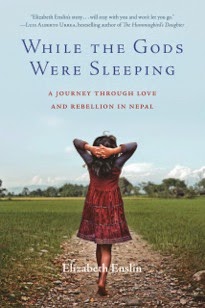 A: While the Gods Were Sleeping refers to a four-month period during the monsoon and early harvest period when the gods are said to be at rest.

Practically, it means that people take time off from scheduling rituals like weddings and initiations. It’s hard to travel during the monsoons, and people are busy during harvest. It’s also a time like Lent in the Catholic tradition when people are supposed to take on special spiritual studies or austerities. I didn’t know much about Chaturmas at the time but had actually carried out the last four months of my pregnancy then.

As I wrote the book, I thought it an apt metaphor for my own sleepiness and lack of awareness as I adapted to life in the family. I also thought it resonated with the nature of underground political movements in Nepal, how activists––especially women–– were biding their time, waiting for the right moment to push their causes into the limelight.

Q: Do you still spend time in Nepal, and what are some of the major similarities and differences since your first visit there?

A: I went back to Nepal in 2007. My son spent his gap year between high school and college there, so the family scheduled his coming of age ceremony that winter. The country was just recovering from a 10-year civil war, so there was a lot of excitement about the peace process, new leaders, a new constitution.

I also noticed more smog, urban sprawl and garbage in Kathmandu and more buildings in where the family lived in the plains too. It's sad to think about how much rich agricultural land is disappearing. These are very superficial impressions, of course. I was only there for a few weeks.

Q: You begin the book with a description of your labor as you gave birth to your son, and you conclude the book with more reflections on your son’s birth and the birth of a Nepali neighbor’s child. Why did you choose to begin and end the book this way?

A: I wrote an early version of the book as a braided essay, which was eventually published in The Gettysburg Review. That piece captured something true in how my memories of a traumatic labor and birth filtered back to me.

For years, I saw that as one chapter within a larger book, but as I tried to find the best structure for my memoir, I decided to use what had worked so well in that one essay and expand on it.

A: I am working on a sequel to this story. I don’t want to say too much about it yet, but it will cover another year of living in Nepal, my son’s coming of age and the challenges and rewards of straddling cultures.