Nazila Fathi is the author of The Lonely War: One Woman's Account of the Struggle for Modern Iran. She worked as a correspondent for The New York Times from Iran, and now lives in Bethesda, Maryland.

Q: You describe the constant harassment and pressure you faced from the government as you worked as a reporter in Iran. How did those pressures affect your work and your life?

A: There were two kinds of harassments: one that was constant and another that came and went. I had come up with a strategy to deal with the one that was more constant. I was aware that the authorities were sensitive toward stories about the supreme leader, human rights violation and persecution of the Bahai’s—a faith that the Islamic Republic does not recognize. So I made sure that I relied on government sources to report these stories and sometimes refrained from reporting them if I did not have a reliable source. 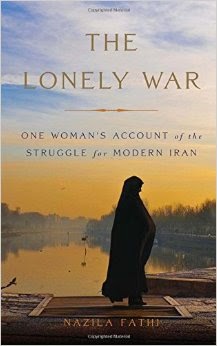 There were also times that my house came under surveillance or I received threats from government forces over a story I had written or an article I had helped another reporter write. During those times I simply laid low and stopped working for a while. I knew that infuriating the authorities could have serious consequences for me and my priority was to stay and continue working.

But working in a stressful environment consumes a lot of energy. I had not realized what kind of toll the stress took until I left the country in 2009 and felt liberated that I did not have to live in constant fear.

Q: Your book includes your own personal experiences as well as a description of Iran's recent history and how it affected other people. What did you see as the right balance between the personal and the more general aspects of the events you were describing?

A: Finding the right balance is always hard. I tried to use personal stories to bring social and historical events to life. To do that, I was careful to focus only on stories and anecdotes, mine or others, that told the bigger story of the country.

Q: How was your book's title selected?

A: It was my editor, Alex Littlefield, who suggested it based on a similar reference in the book. I liked it because it also refers to many other battles that Iranians are fighting on a daily basis.

Q: What do you see looking ahead for Iran, and do you have any sense of how long it will be before you can return there?

A: I am very optimistic about the future because Iran has changed—and continues to change—on grass-root levels. Iranians are getting more educated, more urban and they vie for security and stability.

I have also learned that Iran is unpredictable. So I have no idea how long it will take before I can return.

A: I am following events in Iran and in the Middle East.

A: Unlike what many think, it snows in Iran and it has great mountains for skiing.