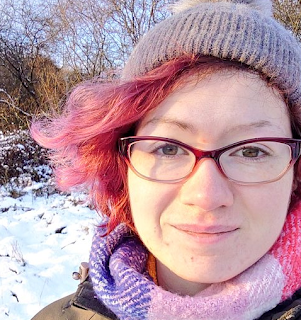 Louise Willingham is the author of the new novel Not Quite Out. Also an environmental scientist, she lives in the UK.

Q: What inspired you to create your characters Will and Dan?

A: Will was always a reflection of myself, and gave a voice to the things I wanted to talk about. While I developed Dan, he started to become something to fight the stereotype that exists in Western media that Russian characters are the bad guys. I was determined to give him a happy ending.

Between the pair of them, they gave me a way to write a love story that dealt with a lot of real-life pain.

Q: You worked on this book for seven years. What was your writing process like?

A: Draft after draft after draft! It took me years to find the best story for this pair. I'm a shameless, chaotic pantser, which means the first draft I write is more like a highly detailed outline than a draft.

For this book in particular, I went through many different stories before I settled on this version. It was always the same characters, but different settings or conflicts. From there, it was a lot of research, more drafts, and working with critique partners and beta readers to produce yet more drafts until I was happy with it! 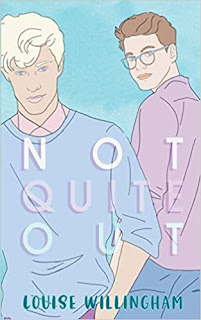 A: The title came to me while I was doodling potential book covers at work! It was the first and only title I ever really considered for the story.

The phrase Not Quite Out really sums up the book and I think it's an important reflection on what it's like to be queer in the real world. We don't come out only once. We forever make the decision whether to be out or not when we meet new people and it can leave you feeling like you're in limbo, with one foot in and one foot out of the closet.

A: The most important message in this story is that you don't need to know everything about someone in order to love them. You don't owe people an explanation and you definitely don't have to come out if you don't want to.

Will feels like coming out is going to change the world, but there are other characters in the book who are obviously queer but never come out. They don't see the big deal with it. This is important because there are so many different ways of being LGBT+ and none of them are the right way.

I also hope people take away an idea of how difficult and non-linear recovery can be from any sort of abuse, and I hope readers finish the book feeling like things can work out okay--even if it's a difficult journey to get there.

A: Right now I'm working on shorter stories. I help run a monthly prompt game (#RueLouPrompts on Twitter) where we invite people to write a piece of flash fiction inspired by a prompt.

I'm also working on a couple of novellas and I have three novels that are in progress, but currently don't have any plans to publish these.

A: The content warnings for Not Quite Out are abortion, PTSD, drug addiction, abusive relationships, and self-harm. You can order NQO from any indie store, but QueerLit (https://www.queerlit.co.uk/products/not-quite-out?_pos=1&_sid=f3ebdcaa1&_ss=r) in Manchester, UK, have a few copies in stock (with limited bonus goodies!).

I'm also selling some leftover stickers and bookmarks (https://loudesigns.bigcartel.com/) from the promo campaign to raise money for the Abortion Support Network, to help fund the amazing work they do.