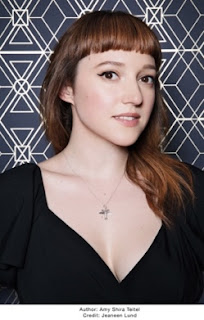 Amy Shira Teitel is the author of the book Fighting for Space: Two Pilots and Their Historic Battle for Female Spaceflight. It focuses on the pilots Jackie Cochran and Jerrie Cobb. Teitel also has written the book Breaking the Chains of Gravity. She lives in Pasadena, California.

Q: Why did you choose to write about these two particular pilots?

A: The decision to do the book from the perspective of two women was me disliking the way the story was traditionally told—that qualified women were kept out because of their gender. It was more nuanced than that. Jackie is usually the villain. I realized she was the interesting one.

A: We had numerous meetings to decide on the title. There was a [newspaper] headline that said, “Give us space, women flyers plead.” I thought that was not the best way to do it. 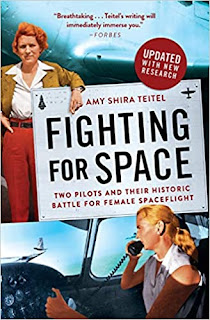 A: I’m a huge archive nerd. I love to have a chance to go into archives. Jackie was an epic pack rat. Her papers are in the Eisenhower presidential library in Abilene, Kansas. I did that, and I went to the NASA archives.

A friend working in space journalism had corresponded with Jerrie Cobb. I knew the general story. I let the women’s words speak for themselves. All the dialogue comes from the letters and actual material.

Q: Did anything especially surprise you?

A: I knew so little about Jackie. I learned just how connected she was. I didn’t know I’d written about her in my first book, in a throwaway line! Then four or five years later, I was covering it from Jackie’s perspective. She was everywhere, she knew everyone, and it was fun to tease that out.

Q: What was the dynamic between Jackie and Jerrie?

A: Acrimonious. They didn’t get along for a number of reasons. The dynamic was extremely strained. They were in a similar field and had similar goals, but they did not get along.

There’s a myth that women universally get along, they’re in the same field so people want them to support each other. But they didn’t get along, and that’s okay. Women are human.

A: A lot! It sounds like a lofty goal, but I would like people to feel they learned about these women. This is a very human story, with shadows of the struggles women still have today. I hope readers have an awareness of that.

It’s striking how the media pitted them against each other. We still do that. I wanted people to leave the book with the feeling there are still issues to solve, and we can have a conversation about it.

A: I poured so much of myself into the book and it was released into the pandemic. It’s been hugely challenging. I’m now waiting and playing with some ideas. There will be another book!

I’m focusing on my YouTube channel and slowly moving away from space—this book was designed to help me break out of that niche.

A: My most important thing is always the parallels we still see now: Do you see this happening in your own life or the lives of female colleagues, and how insane it is that we’re still having this conversation.

One of my favorite aspects of Jackie is that she ran a cosmetics company. She was feminine in a male-dominated world, and refused to compromise either side. I wanted to highlight that in the book.