Elle Marr is the author of the new novel Lies We Bury. She also has written the novel The Missing Sister. She lives in Oregon.

Q: How did you come up with the idea for Lies We Bury, and for your character Claire/Marissa?

A: When I'm ready to write a new book, I think back on what ideas or events have held my interest, or made me do a double-take over the years.

Crimes of false imprisonment are some of the most heinous and I wanted to explore that concept from the perspective of 20 years after the initial horror has ended.

Through Claire's eyes, the book examines how survivors navigate normal life, given the lens of that lived experience, and how and whether someone moves on from that trauma.

Plus, I love exploring little-known real-life places; the Portland Shanghai Tunnels in Portland, Oregon, have always struck me as the perfect setting for a thriller novel.

Q: How was the book's title chosen, and what do you think the novel says about lies and truth? 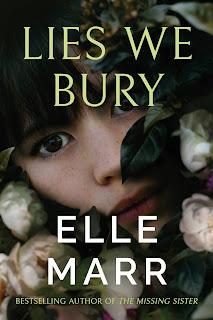 A: I was aiming for a title with the word "lies" in it because so much of any search for truth is obscured by lies, half-truths, or outright omissions.

As Claire works to understand the messages a killer is leaving for her, she realizes much of her past has been mired in obscured memories and lies she's told herself over the years -- a few that were buried deep down, hence "Lies We Bury."

A: I did not know the ending when I began writing this story, but I had an idea of it. Generally, I discover the biggest stakes of a character's journey while writing, and it's during that process that I determine the right ending.

Q: As you mentioned, the novel takes place in Portland, Oregon. How important is setting to you in your writing?

A: Incredibly. In my books, the setting counts as a character as much as any protagonist I write.

A: Currently I'm editing my third novel, Strangers We Know. It's an #ownvoices story about an adopted woman who, through a genetics test, learns that she is related to a serial killer. She travels to meet her family members and learn more about her heritage, while seeking out the truth of her relative's past.

A: I'm so grateful for each reader that chooses to spend time with my characters! Thank you to those who explore Portland, Oregon, with me in Lies We Bury, and for allowing my female characters, especially, to be complex, moody, yet worthy people.