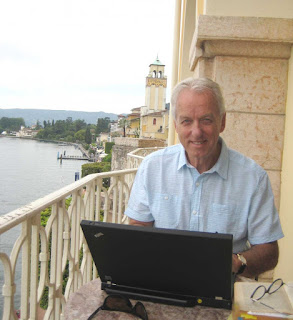 David Gilman is the author of the new novel Shadow of the Hawk, the seventh in his Master of War series, set in the 14th century. He is based in Devonshire, UK.

Q: This is the seventh book in your Master of War series. Did you know from the beginning that you'd write so many books about your character Thomas Blackstone?

A: I thought it might be a trilogy but it soon became clear from readers that Master of War and its characters were worthy of an ongoing series.

Q: How do you think he's changed over the course of the series?

A: Thomas Blackstone’s journey began as a 16-year-old stonemason and archer who cared for his younger deaf-mute brother. They were orphans.

Blackstone was obliged to join King Edward III’s army when the English invaded France in 1346, and I wanted the reader to share the visceral experience of a young man being flung into combat.

Now, seven books and 18 years later, Blackstone’s exploits have earned him the title of Master of War who serves the King and his son, the Prince of Wales. It has not been a straightforward journey; defiance and banishment, marriage and children and personal tragedy have been part of his story. 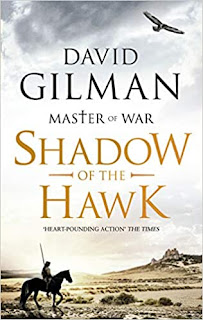 Q: How do you research your novels, and did you learn anything especially surprising in the research for Shadow of the Hawk?

A: I do most of my research through a library I have collected over the years. Among these books are rare and out of print editions that give me snippets of detail I find useful. I looked up my files for this interview and see that I have now collected hundreds of pieces of information from the internet.

When writing the series I was surprised to learn how courtly love and the ideal of honor among the nobility were adhered to on the one hand and savagery easily committed with the other. Also, most were religiously devout during that time.

It was pleasing to discover how many colors were used in medieval times; it was not all grey and drab, cathedrals had painted walls in different hues and there are now French archaeological historians repainting some of these wonderful places to reflect these times.

An interesting fact was that in 1362 King Edward III’s government changed the official language in all royal and seignorial courts from French to English, which then became the vernacular of the aristocracy and the accepted language of literature.

A: More than anything, a strong connection with Thomas Blackstone and his men, all individual characters that my current readers respond to with much affection. And as I kill off characters, there is often a strong sense of loss. Beyond that, I want my reader to feel as if they are “there” at that time and with those people.

A: Every so often I slot in a standalone novel in between the Master of War books and last year I wrote a contemporary thriller (The Englishman) which was well received, so I wrote a second, and am now writing a third – and I am also working on Master of War #8.

A: Although the books are set 650 years ago, there are similarities with today’s world. A devastating plague swept across Europe back then (not for the first time) and killed half the population – thankfully we have been spared that during this current pandemic.

In war, when battles were won (or lost) soldiers were redundant and hired themselves out as private contractors. That’s not too different from any other time. By way of example post-Civil War in the USA, and private armies/contractors in the modern era. History stares us in the face.

If readers want to know more about my books and research, my website is www.davidgilman.com and my FB page is www.facebook.com/davidgilman.author. I always like to hear from my readers and respond personally.