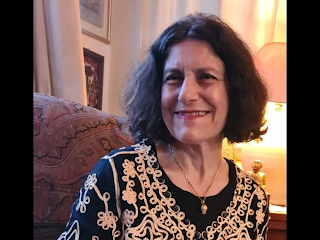 Wafa' Tarnowska is the author of Amazing Women of the Middle East: 25 Stories from Ancient Times to Present Day, a new middle grade book for kids. Born in Lebanon, she is based in the UK.

Q: How did you choose the women to include in your book?

A: My book is a historical smorgasbord or mezze of 25 amazing women who lived in the Middle East, from ancient times through the present.

Some of the women are queens, prominent political leaders, and social activists; but there are many role models from contemporary life that I hope will inspire my readers.

I have chosen an architect, a mathematician, a poet, an astronaut, a scientist, an athlete, a pilot, a jeweller, a film director, a singer, a translator, a journalist, even a Nobel Peace Prize winner!

It was hard to choose only 25 as there are many more women in the Middle East who deserve to be recognised. I would love to do 25 more women in Tome 2 when the opportunity will present itself.

Q: What kind of research did you do to write the book, and did you learn anything surprising? 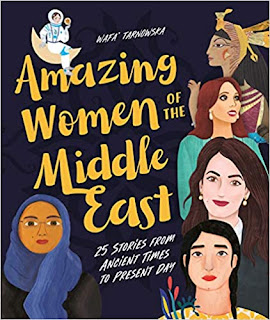 A: I did extensive research on every woman, three days per woman on average, going through encyclopaedias, interviews with them by the mainstream media, looking at their website, going back to their writings and using Arabic, English, and French sources and newspaper articles.

Most importantly, all the facts included in my book were checked by an independent fact checker and by my editor, multiple times.

The surprising but consistent thread that I found among these women is that most of them were multilingual, as if it was a crucial ingredient for greatness.

Cleopatra spoke ancient Egyptian in addition to Greek and Latin, how would she communicate with Caesar and Anthony otherwise? Queen Zenobia spoke Aramaic, Greek, Latin, and ancient Egyptian.

Q: What other common themes do you see running through their lives?

A: The thread tying these women is that they are intelligent, committed to their vision and mission, open to the world, and able to overcome adversity. They are not afraid to be unique, to be themselves, and to follow their inner voice. They are passionate about what they do and often do a lot for others.

Hurrem Sultan, the wife of Suleiman the Magnificent, was the first woman to commission public buildings in Istanbul with a soup kitchen, a primary school, a religious school, a hospital and baths for women.

Amal and George Clooney co-founded the Clooney Foundation for Justice to make sure that court cases of vulnerable people, especially women and refugees, are fairly conducted.

A: I wanted young people to know that there are Amazing Women role models in a region that has been misunderstood and misrepresented in the West for hundreds of years, probably since the Crusades.

I wanted young people to open their minds and hearts to Middle Eastern heroines such as Cleopatra, Zenobia, Semiramis, Nefertiti, and the Queen of Sheba, who played crucial roles in their country’s history.

A: I am writing a proposal for a nonfiction book for young people as well as my first book for grown-ups. During this lockdown year, I recorded eight of my stories in Arabic and English from my “Seven Wise Princesses” and my “Arabian Nights” for the Qatar Foundation Read Aloud initiative: https://www.qfi.org/read-alouds/.

I just gave two interviews about Amazing Women of the Middle East for International Women’s Day:

I hope to continue expanding my creativity and be open to new opportunities as a storyteller, broadcaster, translator, and writer, worldwide.

A: My mission in life is to build bridges between East and West. And for these bridges to be effective they should start at a young age.

That’s why all my books are cultural bridges between the Middle East and Europe, America and the world. These bridges take the shape of Phoenician myths and legends, or Sufi tales, or a feminist rewriting of the Arabian Nights, in addition to Amazing Women of the Middle East.

I hope that my books are opening the minds of readers to other worlds and other cultures that are part of our planet’s history. I think the role of literature is to broaden the horizons of young people and show them the beauty of diversity and the value of differences.

For I truly believe in what Rumi said, that:

“The world exists as you perceive it.

It is not what you see… but how you see it.

It is not what you hear… but how you hear it.

It is not what you feel…but how you feel it.” Rumi