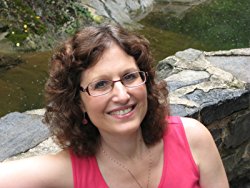 Jacqueline Jules is the author of the new poetry collection Manna in the Morning. She has written many other books for adults and children, and her work has appeared in a variety of publications, including Another Chicago Magazine and Lowestoft Chronicle. She is based in the Washington, D.C., area.

A: The majority of the poems in Manna in the Morning were written in the last five years.

I attend services on a regular basis. Several of the poems were inspired by sermons. I also engage in both Torah and Mussar study. Participating in thoughtful discussions of sacred texts prompted me to explore these themes in my poetry.

I have found many connections to modern life. The story of Ruth and Naomi, for example, is a model of how women support each other through hard times.

The poems in Manna in the Morning examine the lives of biblical figures through the lens of self-discovery. Moses achieved a legacy, undiminished by a destination never reached. In times of self-doubt, his life has motivated me to strive for goals I wondered if I could reach.

Q: Did you know from the start that you wanted to write a collection based on biblical stories, or did the book evolve gradually? 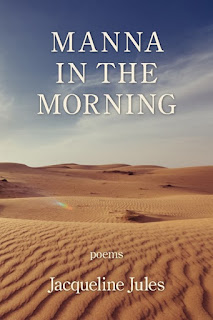 A: Manna in the Morning evolved gradually. As I found myself using more and more biblical imagery in my poems, I realized that I was writing a collection.

A: Manna in the Morning is the title of the poem on page 37, roughly the middle of the book. It seemed like a natural title for this collection.

Manna signifies for me, trust in tomorrow. The Israelites lived day to day in the wilderness, trusting they would find sustenance each morning. In these uncertain times, belief in the future is essential.

Q: The writer Erika Dreifus said of the book, "As she revisits holy texts, Jacqueline Jules gracefully connects ancient stories with modern times, gaining insights into her own quandaries and gently suggesting paths through which all of us may traverse our conflicts and crises." What impact did writing these poems have on you, and what do you hope readers take away from the book?

A: As I studied these biblical figures, I was struck by their humanity. They are not portrayed as flawless. Instead, we are asked to view them as more complex than their worst moment or their best. I hope readers will remember this before they judge others or themselves.

A: I am excited to share that I am in the editing stages of a verse novel for middle grade readers which will be released by Kar-Ben in 2022. I also have two picture books recently under contract. The eleventh adventure in my Zapato Power series, Freddie Ramos and the Meteorite, will be released April 1, 2021.

My own collection of poems for young readers was released by Albert Whitman in April 2020, just after the pandemic lockdown began. Tag Your Dreams: Poems of Play and Persistence contains 31 poems which celebrate being active, reaching goals, and learning limits. Please visit my website at www.jacquelinejules.com.