Gordon Doherty and Simon Turney are the authors of the new historical novel Sons of Rome, the first in a trilogy set during the Roman Empire. Doherty's other books include the Legionary series, and Turney's include the Praetorian series.

Q: How did the two of you come up with the idea for Sons of Rome?

A: We have been friends and co-conspirators for more than a decade. We first came into contact on a peer-review writing website, on which we both honed our debut Roman novels.

By 2012 we were firm friends and arranged to meet up at the annual Festival of History at Kelmarsh. It so happened that this particular year, the heavens opened, appalling rains flooded the site and the festival was cancelled. This left us two, along with a number of other friends, far from home in Leicestershire and with no festival to visit.

Cue a weekend spent largely in the pub. And like many great (and many awful) ideas, the notion of writing a joint novel was born in the hours of carousing and historical discussion that weekend.

Initially, all that arose was the idea that it could be done. At that point even the plot and characters had not been decided. It was a nice idea that seemed nicer with every beer…

Q: What did you see as the right blend between the actual historical figures and your own fictional creations?

A: There is a fine line in historical fiction between the value of those two words. It is important to stay as close as possible to the true historical figure. The problem is that it can be hard to define exactly who the historical figure truly was, especially when history has gone on to either glorify or villainize them.

The blend we needed to reach here was to keep the characters close to the historical narrative while simultaneously making them believable as real people.

To this end, Constantine has had the noble sainthood pared back to reveal a more likely troubled, if visionary, leader, while Maxentius has had the Disney-villain status history has assigned him lessened to produce a more rounded and believable character.

It is all about trying to portray the most likely reason behind every decision. To rebuild a true person from a caricature. One thing we strove for was not to sacrifice the historical character for mere story growth. 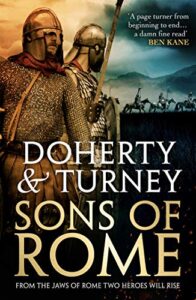 Q: What intrigues you about Roman history?

A: Firstly, Roman history more than any other era or empire has left us with a world of remains to examine and to marvel at. It is almost impossible not to be impressed by a people who left such a legacy.

Secondly, Rome is the most enduring ancient world in terms of written material. We can see Rome’s culture down to the level of soldiers sending requests to their mum for spare socks!

And finally Rome endured as a culture from 753 BC to 1453 AD. That is longer than from the birth of Christ to today. Over that time it changed and grew, becoming something new while always still being Rome.

This means that it was such a longstanding and malleable culture that a person can study it all their life and still know only a part of what there is to know.

Q: How did you collaborate on the book? Can you describe your writing process?

A: Plans were laid and progress charted and tweaked during meet-ups, between which we both worked from our homes, almost 200 miles apart. Technology here was key – Dropbox & email primarily.

Communication was also essential: at the start of each week, we would check in and establish which days we would each be using the shared assets, so as not to tread on one another’s toes.

The sequential nature of our tale, switching back and forth between chapters, allowed us to plan our working times and to fit our schedules around any other projects.

With two voices producing one manuscript – each writing one chapter then handing over to the other to write the next – narrative flow and style are clearly going to vary considerably.

Here, our decision for each of us to write one of the two protagonists, alternating, meant that each of us got to read and edit the other’s previous chapter before moving on to write our own, which allowed us to more smoothly settle into the flow of the tale, and to make sure there were no jarring moments moving between chapters.

Essentially, we naturally continuity-checked the work as we wrote.

Q: This is the first in a series--what's next?

A: There are two more volumes in the Rise of Emperors trilogy. Book 2 is finished, polished and out this year, and book 3 already has its cover and is in the editing process, so the story of Constantine and Maxentius is complete and ready to hit shelves.

Beyond that time will tell, though one thing is for certain: the partnership between us is far from done, and there are other characters and times waiting to be brought to the fore. Indeed, we are currently exploring particular possibilities.

A: Roman fans who enjoyed Sons of Rome and are hungry for more reads can check out our existing works, exploring earlier Rome under Commodus and Septimius Severus in Simon’s Praetorian series and later Rome under Valens and Theodosius in Gordon’s Legionary series.