Jennifer Dupee is the author of the new novel The Little French Bridal Shop. She lives in the Boston area.

Q: How did you come up with the idea for The Little French Bridal Shop, and for your character Larisa?

A: I grew up on the North Shore of Boston. My grandmother lived for many years in the seaside town of Beverly Farms. It’s a setting that is deeply ingrained in my psyche and one I drew on as I created my fictional town and embarked on the opening pages of the book.

I had this vision of a regal house up on a hill and I intuited that my main character, Larisa Pearl, had inherited the house. But I knew there was more to the story so I decided to send my protagonist down to the little main street in the town just to see what would happen.

When I was in high school, Beverly Farms actually had a bridal shop on their main street—I shopped for my junior prom dress there—so it felt natural to create The Little French Bridal Shop.

Larisa decides to enter the shop even though she has no groom. She decides not to correct the shopkeeper’s assumption that Larisa is planning a wedding. By the end of the chapter, Larisa has purchased a dress. So the book began with this small deception and grew from there.

With this first small deception, I knew that Larisa was hiding something larger, escaping from something. My job as the author was to figure out what it was. 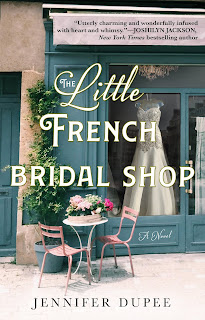 Q: Why did you decide to include the issue of dementia in the novel?

A: As the story developed, Larisa takes a crowbar to one of the house’s walls in an effort to discover the source of an apparent leak. She’s purchased the wedding dress and she’s perpetuating the rumor that she’s getting married.

As I developed the book, I realized that the thing from which she is trying to escape is her mother’s failing health. She is in a state of disillusionment and confusion; she’s not thinking clearly. In short, she’s not quite herself.

I recognized this state as it was something I deeply felt when I was grappling with my own mother’s illness and then subsequent death from breast cancer.

As I began to delve into the writing, the story of Larisa’s deceptions became a vehicle to explore the feelings of loss of identity, disorientation, and confusion that consumes a child (even an adult child) who becomes a caretaker of an ailing parent.

I chose dementia as the illness from which the mother is suffering because it really amplifies that theme of loss of identity and loss of self. When the beacons by which we define ourselves are no longer there, who are we? My book explores this question.

Q: As you mentioned, the book takes place on the North Shore of Boston. How important is setting to you in your writing?

A: I almost always start with setting in my writing. I’m a very descriptive and imagistic writer and I take great joy in “painting with words.” I love to render a landscape, a seascape, a familiar place. My goal is to help my readers visualize the place as well as I do.

A: Once Larisa purchased the wedding dress, I knew I would have to get her back into the dress by the end of the book. I wasn’t sure how I would do it, but I wrote toward that goal.

I also knew that the night blooming cereus, the cryptic plant that features in the book, would play a part in the ending.

A: I have two projects in the works at the moment. One of them is still gestating and so I won’t talk about it yet.

The other is a first-person narration told from the perspective of a 7-year-old girl. Her mother is pregnant, and the entire family is eagerly awaiting the birth of this new baby girl. The story is set in motion when a strange man arrives at the end of the driveway and claims that baby could be his.

A: Though the book tackles some difficult subjects, it’s ultimately a very hopeful book. I think readers will come away from it with a sense of renewal and a promise that when times are hard, we can find relief with facing our vulnerabilities and connecting with those we love.