Sara Davis is the author of the new novel The Scapegoat. She has taught creative writing in New York City and in Detroit. She lives in Shanghai, China.

Q: How did you come up with the idea for The Scapegoat, and for your character N?

A: The starting point for The Scapegoat was without a doubt the narrator, N’s, voice. That was the first thing that I had. A male voice, not young, spiteful but by the same token easily offended, a little pedantic and a little whiny. And, as Nabokov says, “You can always count on a murderer for a fancy prose style.”

At the beginning I had no idea what the plot was going to be, I only had the voice.

Q: The novel takes place at a Stanford-like campus. How important is setting to you in your writing? 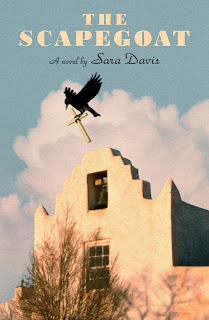 A: For this book, very important! My parents have worked at Stanford since before I was born, so in a lot of ways it’s like a second childhood home.

The picture that they put on the postcards, of the long aisle of palm trees leading to the Memorial Church, with the foothills and the blue, blue California sky above it, is pretty bewitching. Stanford also has an interesting history—it was founded by the Stanfords in honor of their only child, who had died several years before the University opened.

In terms of my writing in general, everything seems to be set in California so far, which is not intentional. I am hoping to branch out!

Q: You've said that The Scapegoat was not your first suggestion for the book's title. How did you choose it, and what does it signify for you?

A: Indeed, this title emerged late in the publication process. I did not think I would be allowed to choose it because it is already the title of a great book by Daphne Du Maurier, one of my writing idols.

To me the main character of the novel quite literally becomes a scapegoat. He’s punished by this shadowy group for crimes he did not commit (the crimes were committed by his father, and more broadly, by early European colonization of the Americas).

Also, the Biblical scapegoat is such an interesting story, the ritualized laying of sins on to a live animal who was then sacrificed.

A: I definitely had no idea how it would end when I started writing it. Quite the opposite. For the first two or three years of writing it, the book ended with N turning into a literal scapegoat, i.e., a goat. That is no longer the ending! Many, many, many, many changes…

A: I am working on a novel about an undead Mary Shelley.

A: Yes! You should know, if you don’t know about them already, that there are these excellent books by Hazel Holt that have been my saving grace during the pandemic.

They are mysteries, the amateur detective is a nice widow named Mrs. Malory, and she’s always baking a Victoria sponge or dealing with her pets in between solving the mystery (the murdered person is always someone who was very unpleasant anyways). Enjoy!