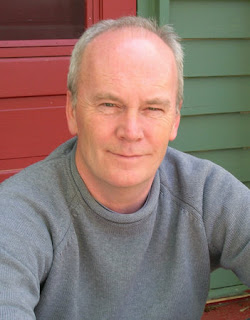 Tim Brady is the author of the new book Three Ordinary Girls, which focuses on three Dutch teenagers during World War II. His other books include His Father's Son. He lives in St. Paul, Minnesota.

Q: How did you first learn about the three young women you write about in your book?

A: The idea for the book originated with my agent who saw the September 2018 obituary of Freddy Oversteegen in The New York Times and passed it on to me. Freddy was the youngest of the three girls in the story---the sister of Truus Oversteegen---and was 93 years old when she passed.

It was hard not to get excited when I learned the details of their lives. Freddy, Truus, and a third young woman, Hannie Schaft, had not only worked for the Dutch resistance during World War II, but had actually served as assassins and saboteurs against the Nazis.

I knew, of course, that many women had served in the underground throughout Europe during the war, but how many teenage girls had actually taken up arms in the resistance?

I was immediately sucked into questions about who they were, what drove them to the extremes that they pursued, and how they carried out their actions. It was one of those rare stories that became more and more fascinating and remarkable the more I dug into it. 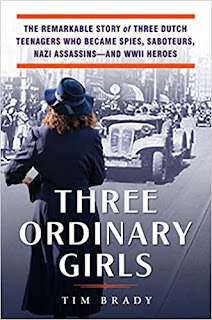 Q: How did you research the book, and did anything especially surprise you in the course of your research?

A: When I’m writing narrative histories, I like to focus on individual stories and follow them in a cinematic fashion as they live through the action described.

To do this with historical accuracy requires the use of the closely followed perspective of whatever character I’m writing about.

I’m always looking for source material---diaries, memoirs, letters, interviews---that allow me to understand and use the voice of my subjects, so that to some extent I can see what they see, think what they think, and act as they act within the context of the narrative.

Because almost all of the principals involved in the stories I write are no longer living, I usually must rely on other means than my own interviews to collect these tales.

I found wonderful source material for Three Ordinary Girls, particularly the memoirs published by Truus Oversteegen after the war called Not Then, Not Now, Not Ever, as well as a biography of Hannie Schaft by journalist Ton Kors, who was able (in the 1970s) to interview a number of her contemporaries, including some of her fellow resistance fighters and even a couple of members of the Dutch Gestapo who arrested and interrogated her.

The Oversteegen sisters both lived into their 90s and late in life were filmed and interviewed for documentary television. Though both had passed by the time I started researching the book, being able to see them in this fashion, as frail but still defiant white-haired ladies, gave me an indispensable sense of their character.

Because I knew very little about Dutch culture prior to beginning this project, one thing that surprised was what an important role bicycles played in the story.

I started to do research on the history before I first visited their hometown of Haarlem, and I was instantly struck by how much of the lives of the girls and their work during the war took place on bicycles.

It wasn’t until I got to the Netherlands and Haarlem for myself that I saw just the sort of integral role bike travel is to the life of the Dutch.

A: Though I’ve written a number of books that are set during World War II, and I’m drawn to that backdrop for my stories, I’m less interested in the large-scale actions and events of the war than I am in smaller human tales that describe individual lives within the great scope of this global upheaval.

The story of how three young women resisted the evils of Nazism in a country whose trials and tribulations are not as well-known to Americans as others in Europe, had an immediate appeal to me.

I’m less interested in larger-than-life characters responding to the extreme stresses and upheaval of war than I am in what I label here, the “ordinary” girls of Haarlem. I like to find the extraordinary within ordinary appearances.