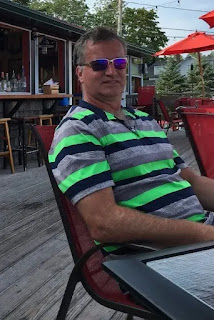 Matt Cost is the author of the new mystery novel Mainely Money, the third in his Mainely Mystery series, which also includes Mainely Power and Mainely Fear. A former history teacher and coach, he lives in Brunswick, Maine.

Q: What inspired the plot of your latest Goff Langdon mystery?

A: The inspiration came when a president of the United States suggested that it would be easy to blackmail a senator.

That got my wheels turning, making me realize how most people have some of baggage in their history that they’d prefer stay hidden. Or, worse yet, it is nothing that they’ve done wrong, but perhaps is something that is really none of anyone’s business, but the revelation could be awfully damaging.

That thought was the inspiration that started this story to the races. As many novels go, for me at least, there were many unexpected turns along the way.

Q: How do you think your character Goff Langdon has changed over the course of the series?

A: This third book does not follow any sort of normal course of action of any series. I’d written rough drafts of Mainely Power and Mainely Fear years ago. 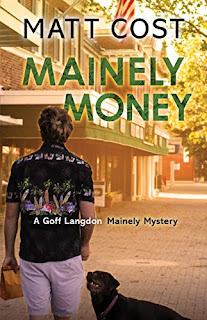 When I gained the attention of a publisher (Encircle Publications) with a work of historical fiction (I Am Cuba, published in March of 2020), they agreed that with some heavy edits they would publish those first two mysteries as well.

I was excited to return to the Mainely Mystery series, and decided to do a third, but keep the time jump, meaning that Mainely Money takes place 20 years later. Langdon has divorced, remarried, raised a daughter and stepkids, and entered into middle-age with the love of his life.

He continues his passions for mystery books and private detecting, but is definitely overall more mature, even if still prone to juvenile mistakes.

Q: Did you need to do any research to write this installment in the series?

A: I immensely enjoy creating a story that is entertaining to the reader. At the same time, I think it important to share and educate in some form. For my historical novels, this is essential. I believe that it should be for all literature.

In this instance, I was left agape as I dug into the practice of private mercenaries for hire, the biggest contractor being our own government. This is done for a variety of reasons, but one that jumps out is there is far less oversight of the work they do, then if our own military engaged in those activities.

These mercenaries are hired for a variety of tasks that need to be kept hush, and there are even slush funds within the defense budget for this, with virtually no oversight.

Couple that with the power that large corporations and their lobbyists hold over Congress, and you have created a boiling cauldron that can be used for good—or bad.

A: Although this is a mystery verging upon a thriller, about blackmail, gangsters, mercenaries, killers, environmentalists, and politicians—the world is not black and white.

Almost all people hold a piece of good within them, and most people hold the capacity for wrongdoing, and it is the shift of the hourglass that determines the depth of good and bad.

A: It has been a busy year for me. I have been helping promote the release of Mainely Money on March 10.

Encircle Publications has agreed to publish a new series that I’ve written three of so far. The first Clay Wolfe Port Essex series mystery, Wolfe Trap, comes out June 23. I’ve been working with the design and description of that. Mind Trap is due out in December, while Mouse Trap follows in March of 2022.

In the middle of that I have a new historical coming out in September of this year, Love in a Time of Hate; New Orleans During Reconstruction.

I am halfway through writing a new Goff Langdon Mainely Mystery, tentatively titled Mainely Angst. Writing, editing, and promotion is what I’m working on now.

A: I’d like to share that Mainely Power has just been selected by the Maine Humanities Council as their fiction book of the year.

As well, that I really appreciate the people that allow me to do what I love. People such as yourself, Deborah, who promote books and connect readers with writers. And of course, the people who read the books we write, as without them…well, I’d still write.