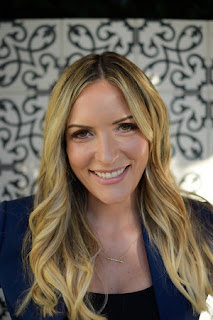 Eve Rodsky is the author of the new book Fair Play: A Game-Changing Solution for When You Have Too Much to Do (and More Life to Live). She is the founder of the Philanthropy Advisory Group and is a mediator. She lives in Los Angeles.

Q: Why did you decide to write Fair Play, and how do you define the concept of “fair play” in a relationship?

A: It was the book I was born to write! The backstory: I grew up in a single-mom household. It’s a way you’re raised. Eviction notices would come in, and I got really good at noticing the differences in the bills—whether they were normal bills or final shutdown bills. I thought, it’s so overwhelming for her. I didn’t want that life. I wanted an equal partner in the house.

I did marry an equal partner. I was very supportive of his career and he was very supportive of mine. Then I had this text: “I’m surprised you didn’t get blueberries”—right after our second son was born. I was racing to get our older son from his program, and I started crying. This was not supposed to happen to me. I’m a Harvard-trained mediator. I teach families to communicate, and I vowed this wouldn’t happen to me.

It was the beginning of a seven-year quest. There are terms like “second shift” and “mental load.” There’s “invisible work,” a term from Arlene Kaplan Daniels. That was the only term that has a modicum of an answer. You can’t value what you don’t see. Visibility equals value. I created the “Sh*t I Do” spreadsheet—that came about through this quest. The spreadsheet became so important to so many women. 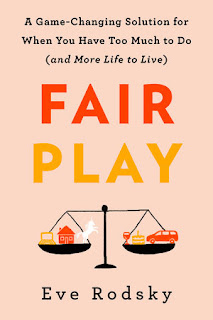 I asked everybody I know, What do you do that’s invisible to your partner and your family? I had the funniest answers. It was really fun for me. It felt like for the first time I was taking back control of my life.

After that I used all my communications skills—I sent the spreadsheet to [my husband] Seth and said, “I can’t wait to discuss”—and I got back a sad monkey emoji covering its eyes.

A woman I didn’t know who helped me source this said, I’m not staying in my marriage. Other women texted me, WTF—I didn’t realize what I unleashed. Other books [about this] are dry as hell. I’m always looking for solutions. Even the most thoughtful books said to make a list—but it didn’t help. Lists alone don’t work, but systems do.

I’m a mediator. I kept thinking, If I know organizational management well, why wouldn’t the principles work for home—and they do!

It took seven years. I didn’t want it to be a white woman giving advice based on my economic privilege. I wanted a data sample that mirrors the U.S. census, a good sociological sample. Then I spent three years developing the system. It took so long, but I’m so confident in my data. I’ve seen it all.

The system requires two players—you are the initiator, but the other person is a very active participant.

A: It does. I want to be very intentional. I used “him” and “her” in the book because this is a gendered division of labor. Men and women were who I was initially addressing. In terms of the second part of the book, the prescriptive part, the rules of how you play the game, it works for same-sex couples.

Q: What do you see looking ahead when it comes to managing relationships in an equitable way?

A: Looking ahead, I’m hoping we as a society are moving away from the idea of 50-50 toward the idea of fairness. 50-50 leads to scorekeeping. Half the population is women, and [the 50-50 model] sets us up for disappointment. There’s no way to communicate what is 50-50.

When you move to an ownership model, the other person takes ownership of one card. Take extracurricular sports. It’s not just taking [your kid] to a game, but registering, getting the equipment, packing the bag, being the snack mom. It took eight to nine hours a week of my time.

About three years ago, when Seth took it over, it was a huge relief. But it wasn’t 50-50. Perceived fairness is more important. But parties should perceive fairness. The focus should be on fairness and ownership.

A: The book has been out for two months. Over 400 emails have come in. Five thousand people have asked for the cards, and 400 have asked for information on [me]. My assistant told me 65 percent of those asking how to play the game are men. Even though this book was written for a female readership—it started as my love letter to women—it has now become [of interest] to men.

There are other books out recently, but they have a pessimistic attitude, that men won’t do more in the home. I don’t see that.