Janet Roger is the author of the new novel Shamus Dust: Hard Winter, Cold War, Cool Murder. It focuses on an American private eye in London in the post-World War II period.

Q: How did you come up with the idea for Shamus Dust, and for your character Newman?

A: Well, strictly as a title, it comes from a line in the novel, also used in the epigraph. It goes: She said, How on earth did he get here? As if all you ever do is sprinkle shamus dust, and the police suspect of the year floats in.

Beyond that, the period private-eye treatment is ultimately a device. The simple fact is, I’d been intrigued by a real-world story that just happened to take place in London in the early post-war (the book’s subtitle is Hard Winter. Cold War. Cool Murder). It was a big story, but one that seemed almost stranger than fiction to me.

So, perhaps because I was raised in History and Eng. Lit., I began thinking that fiction might be a more satisfying way to tell it. The question was, how?

And from there it was a fairly short step to the hardboiled mystery genre that, in the hands of Raymond Chandler, had  been a literary phenomenon of those times. I’d known and adored his Marlowe novels since I was a teenager (such a break from the heavyweight reading I took home!).

And of course, part of the deal was that the genre gave me a shamus, a private eye, to unfold the mystery as I saw it. 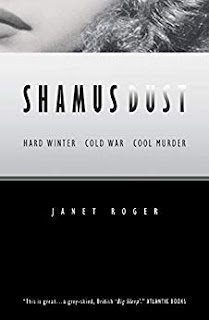 Of course, there are other parts of the deal too. If you’re serious about Chandler as your point of departure, then the shamus is going to be your first-person narrator, you’ll also need a femme fatale, the city has to work as a character in the story and the writing requires a certain bravura. And so on. You put in the notes that strike those chords and that helps - I hope - to make it fun.

Q: You wrote that "the story's current relevance has just as much to do with its tale of well-heeled and influential people, willing and ready to cross any line that gets in their way." What connections do you see between your story and today's headlines?

A: When I wrote that, the Robert Mueller inquiry was in full swing in the United States. Since then, well, you could choose your headline from so many parts of the world.

The connection I had in mind was to Newman’s City of London in those Cold War years.

Historically, the City’s grandees had played a long game, removing by degrees the checks and balances on their room for manoeuvre; until by 1947 their single square mile was the most powerful financial concentration on the planet, mostly self-governing, and owner of the considerable force that policed it. The law was its own, as Newman discovers.

There’s a moral in there about the rest of us giving up ground on the checks and balances.

A: Let me tell you about a visit I made to the History Center in St. Paul, Minnesota, because it made me realize why the Shamus Dust period has so long fascinated me.

Now, if I were to tell you that the History Center has a gallery on the third floor called Minnesota’s Greatest Generation, which generation would you think they had in mind?

Personally, I guessed at pioneer tales of the Midwest, or the harnessing of the giant Mississippi, [but it was the generation raised during the Great Depression who fought in World War II].

Of course, it was never only Minnesota’s greatest generation. Neither was it uniquely American. The same string of early-20th century calamities put whole populations through the same grinder worldwide.

That generation was growing old all around me when I was far too young to know what it had come through, or the questions I could have asked at the time. Which I suppose makes Shamus Dust, among other things, a small, personal homage I’d be glad to share.

A: Literally this morning I had an email to say that Shamus Dust has won the 2019 Beverly Hills Book Award for Crime Fiction. I’ve been bursting to tell somebody!