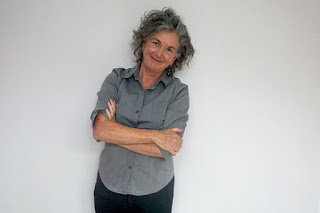 Susan Grace Banyas is the author of the new book The Hillsboro Story: A Kaleidoscope History of an Integration Battle in My Hometown. A multimedia artist and choreographer, she grew up in Southern Ohio and lives on the West Coast.

Q: How did you come up with the idea for The Hillsboro Story, and how long did it take you to write it?

A: I wanted to investigate a childhood memory—go back to my hometown and find the people now who were part of the memory then. I didn’t know where this would lead, but I did know that I wanted to write a story, a history, with multiple voices, not dominated by the official story, although I was the narrator and detective, so my query dominated.

I also knew that to write about this “integration” battle, I wanted to integrate the voices. I wanted to know what happened, enlarge my own memory, activate memory to become a catalyst for seeing the larger story of my life, my society.

As a movement artist, I wanted to write a book about the movement and spiritual intelligence of protest because as a white person, schooled and socialized in America, I was denied access to this intelligence because of fear and ignorance. I had to re-member, piece a history together, retrieve the parts of my memory -- history that had been kept in the shadows, demonized, or simply ignored.

The work evolved over a long time, from the memory itself, which took root in 1955, to finding my Quaker great-great-grandmother’s Civil War diary in 1982, to discovering a piece of the memory/story in 1990 at the 25th high school class reunion, to 2003 when I began the investigation.

I teach and direct a process called “soul stories” – penetrating a memory through movement, voice, painting, words, and identifying key images, then re-constructing the memory as a creative experiment free of habit.

The Hillsboro Story is a soul story. I decided to apply my method (body first) to the key memory—seeing the mothers and children outside my 3rd grade classroom window marching to integrate the schools.  I didn’t know where it would lead. It’s been a 16-year process!!!

I began by listening, recording the memories, transcribing words, beginning to sense the people and their experience, feeling the environments, the landscapes where the memories were born, cross-checking these memories against my own experience and the historical record. People shared photographs, articles, time.

I went to the courthouse to find documents, read what was emerging from the academy on the issues of segregation, slavery, abolitionism, the Cold War. I spent several years gathering data, interviewing, and continually tracking current American politics, which was clearly shifting farther and farther to the right. I began to see how what happened in the ‘50s, a turning point in America after the Brown decision, was coming to bear down on the present moment.

The Civil Rights movement, the Abolitionist movement, Women’s movement, Gay Rights Movement, Occupy, Black Lives Matter, #MeToo, Veterans for Peace, Sunrise Movement – all the movements -- have pushed the country toward a pure democracy and the fundamental responsibility we have as citizens to nurture and care for each other and for life itself. The movements did not arise to protect the American way of life. 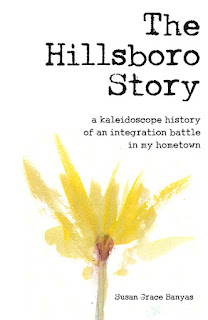 Central to all of this was the fact that I’m a mother. I started the project when my son was in high school, and like the Marching Mothers of Hillsboro, I wanted to protest the terrible invasion of Iraq, the destruction of people and culture in order to control the oil fields.

The protest story I witnessed as a child became the story of these times as well. Schools were becoming corporate enclaves of standardized testing and “no child left behind” -- children were being indoctrinated into a hyper material, violent war culture through the gaming and advertising industries who were infiltrating consciousness through the media.

I wanted to do something because I could see the direct effects of this at the same time the infiltration was accelerating. What could I do besides worry?

The first piece I wrote was "No Strangers Here Today" about my Quaker ancestors and their participation in the Underground Railroad -- my great-great-grandmother’s diary, set against the backdrop of the Civil War and the Abolitionist movement—this was the backstory to The Hillsboro Story and a template.

Her voice inspired a sparse, simple style of observing and noting moments. The power of her action was embedded in her faith expressed simply through her memories noted day to day.

Both works began as theatre, and then I had to figure out how weave these stories, these voices, into a story about integration. Luckily, I collaborated with an African American jazz composer to create these theatre works.

“Integration” became aesthetic and personal. Jazz history is American history, and my work has been expanded and deepened through engaging with the music, sound, and culture of jazz at the same time I penetrated the invisible wall of segregation in my hometown, and crossed the line to the other side, guided by the Muses, the call and response.

Q: You're a multi-media artist, and the book includes many photographs along with the text. How did you decide on the book's format?

A: I photograph landscapes and people as a way to see and compose. Photography is a tool in my “everyday dance,” the quality of a moment, a gesture, the arrangement. The archives people shared – family photos -- spoke volumes about their lives and exposed me to more understanding of what has value.

Memory is multi-dimensional. As a choreographer, I dance between these dimensions in order to honor the complexity and power of memory, and to have the freedom to place images on a page, play with time, slow the reader down to feel-think, construct a narrative free of logic and structure organically and with precision. I think we need to THINK differently if we want to change our society.  How do we practice this?  How do we do this?

Q: Did you write the book in the order in which it appears, or did you move the chapters around to create a certain effect?

A: I knew I wanted the story and backstory, to use these conventions of a storyteller. I had to figure out how to set up a fluid structure -- from soul and body to geopolitics. I compose in small chapters, scenes, and the book is structured like cinema, which is why my muses are both E.B. White and Federico Fellini in the book. Thankfully, I had a great editor, alive in the here and now, who saw the weaving and strengthened it.

Q: What do you hope readers take away from the book, given the continued focus on race relations in today's political climate?

A: I want the book to go to high school students so they know that their memories are part of history, that we are all part of history and it is alive, not something dead and over. I hope this book is part of the conversion that this country is undergoing, now that the dark side is completely exposed, and fascism is on the rise globally.

This county has never come clean about its history of slavery and genocide of Indigenous people, never owned its track record of being an empire with the big bombs, who can dominate and police the world to extract resources to run its systems. I hope the book stimulates conversation and action related to not only WHAT we learn but HOW we learn.

How do I own my history as a descendant of settlers and immigrants? Where does my memory meet the memory of those who descended from slave owners and slaves, Shawnees and Lenapes, coal miners and farmers. We all peopled the territory I grew up in. As I say in the book, the story is not about small-town drama, although drama drives the story. The story is about power, about who controls memory.

I hope the book empowers people to look at their own families and cultures honestly, to know and feel the subtle ways racism and misogyny appear and play out. We are embedded in this system built on war and genocide and colonization; and the journey to understand this at a subtle level is deeply personal. I hope we ask our Elders to share their stories in order to empower us with the truth of lived experience. I hope the book is a tool for creative action and deeper listening, a tool to give voice to history, through the body.

The book was written through the help and guidance of many people who trusted me with their memories, whose experience shaped history, history alive through shared stories. It was from a deep sense of trust, without and within -- spiritual leadership from those living and those who have passed on -- that I was able to create this kaleidoscope history.

We are a collection of oddballs, so why not embrace our crazy differences, harness our creative voices, try not to kill each other, and co-design new systems that protect children and mothers, nurture community growth and development. We can build a new world, but we can’t accomplish this without seeing how we got here, how power works, how to shadow dance in relationship to forces designed to use and abuse people, “remove” anyone in the way. I hope we re-member to remember why we were born and our gifts we each bring to the world.

A: I moved to Astoria, Oregon, at the mouth of the Columbia River four years ago (to finish the book) and discovered how ruthless and domineering the timber industry is. Clear cuts are accelerating at the same time climate change is accelerating.

There is a direct relationship and not much discussion because of the economic domination of this industry, which is not local or family owned anymore. These are Wall Street corporations mowing down the great forests of the Northwest, to profit shareholders.

I collaborated with two other artist activists to bring the discussion forward through a series of events over the course of a year and a half -- to allow the forests to speak through the multiple voices -- scientists, activist, artists, poets, policy makers. We called it Forest Visions Project. The results are powerful and in motion.

I want to continue pushing for the Green New Deal as a vision for retooling society, with art and storytelling as the central language for thinking outside the box in order to innovate new solutions. Life or death? Climate change is the fundamental issue of our times. I am listening and learning.

I have another project -- a section cut from the book because it has its own life.  The working title is Kundalini History/Voices from the Great Serpent -- a theatre/dance/music piece in the works -- based on interviews, research, personal experiences, and six primary voices who call forth the wonder of the ancient earthwork, The Great Serpent Mound, 20 miles from Hillsboro.

This sacred site is the source of wisdom that is being recovered and reimagined. A crop circle appeared opposite the site in 2003, when I returned to Ohio to begin The Hillsboro Story. The Serpent is calling. Now what? What I am discovering is truly mind-boggling. More later.

A: Deborah, thank you for the opportunity to speak about the work.  I appreciate your interest in the book and the issues.