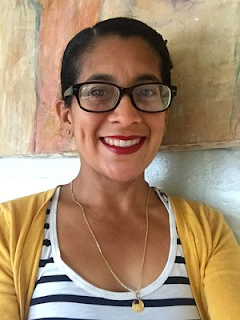 Q: How did you come up with the idea for Strange Birds, and for your four characters?

A: It started with the setting. I knew I wanted this book to be set in South Florida, where I grew up, and to take place during summer.

I also knew I wanted it to be about a group of kids who form their own scout troop. I had read some stories about a group in Oakland, California, called the Radical Monarchs. A mom whose daughter was interested in joining a Scout troop co-founded it with the help of a friend.

They created what they hoped would be a radical social justice group for girls, one that would center her daughter’s experiences as a brown girl. I'm always interested in how people adapt traditions for their own purposes and needs.

I wanted it to be a story about friendship and adventure and kids being outdoors, doing their own thing, discovering truths about the world and about their own power. It's loosely inspired by Stand By Me, one of the movies that came up in conversation with my editor when we were talking about all of the movies about kids, mostly boys, having outdoor adventures.

In Strange Birds, the kids are all looking for something, in need of something. I wanted them to come from different backgrounds and have different interests and not necessarily be kids that might be friends. And then I threw them together to figure out how to make it all work.

The idea to make the feathered hat central to the story came with the development of Cat's character. I wanted to have something they would bond over, that they would take on as their mission. 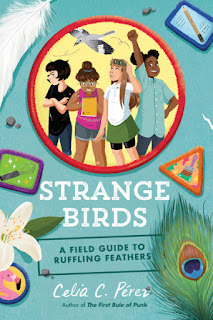 Q: You tell the story from four girls' perspectives. Did you focus more on one character and then turn to the others, or did you write the book in the order in which it appears?

A: The original draft was written from Ofelia's point of view. It was going to be her story. But with four characters it felt like each needed space and voice to tell her own story and the group story from her own perspective.

I typically write my chapters in order so once the story was written the task became figuring out how to balance the chapters so that no one character had more voice than the others, but also to try to make the flow of the chapters (and whose point of view they were being told from) happen naturally. It was definitely a challenge.

Q: You write, "One of my favorite parts of the writing process is doing research." What kind of research did you do to write this book, and did you learn anything that especially surprised you?

A: I researched all kinds of details--some that went into the book and some that just fed my own curiosity.

The two biggest areas of research I did involved the feathered hat trend of the late-1800s and early 1900s, and how this influenced the passing of the Migratory Bird Treaty Act, as well as the history of South Florida, especially the early settlement of the Coconut Grove area by people from the Bahamas. While the book is set in a fictional town called Sabal Palms, its history and geography is based on a real places.

One interesting thing I learned that some readers may know or pick up on, is that the keyboard we use today is called the Qwerty keyboard. The layout, QWERTY being the letters on the top left of the keyboard just below the numbers, was conceived of by a man named Christopher Latham Sholes. So I named the journalism writing contest that Ofelia wants to enter The Qwerty Sholes. 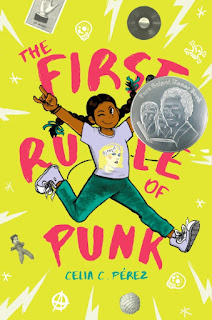 Q: You said in our previous interview that you didn't plot out The First Rule of Punk before starting to write it. Was that true with this book too?

A: I am not a plotter. I start with some notes, just thoughts I have, and then start writing from the beginning. As I'm writing I can sometimes start plotting in my head though never enough to really know where the story will end. I can start to see the shape of the story.

With Strange Birds, I definitely did not have an idea of how it would end until it ended. The feathered hat was not part of the original draft so once that piece came into the story, it helped set other things up, including the ending.

A: Because I'm very superstitious about my writing I don't share details of what I'm working on until it's as close to the final product as possible. However, I have a couple of ideas for middle grade novels, and I'm currently working on drafting one of those into a story that I'm excited about.

A: I'm so pleased to have Strange Birds out in the world and in the hands of readers. It's a book that was incredibly challenging and also incredibly fun to write.

It's a fast-paced story about friendship, adventure, activism, history, family, mystery, and the importance of small revolutions that can lead to big changes. I like to think it has a little something for everyone, and I hope readers enjoy it. Thank you!

--Interview with Deborah Kalb. Here's a previous Q&A with Celia C. Pérez.
Posted by Deborah Kalb at 7:32 AM