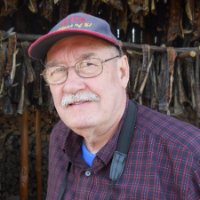 Norman Brewer is the author of the new novel Blending In: A Tale of Homegrown Terrorism. A retired journalist, he worked for Gannett News Service and the Des Moines Register. He is based in the Washington, D.C., area.

Q: How did you come up with the idea for Blending In?

A: I started looking for a book project after retiring in the spring of 2011. After one of the mass shootings or acts of terrorism that have become a national plague, I had the thought that such attacks are usually committed by people who are undisciplined, poorly trained or societal misfits, or all three.

That suggested how much worse the consequences could be if attackers were relatively well-trained, organized and seemingly ordinary. In other words, people who could blend in, such as Stickman and Maple in my novel.

Also, news stories sometimes suggest homegrown terrorists give little thought to escaping and living to attack another day. That’s not Stickman and Maple. 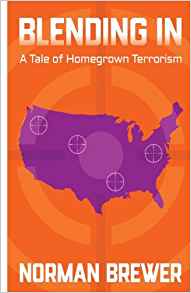 A: I needed to ensure that the munitions, including explosives, were compatible with carrying out the crimes and that my portrayal of places was reasonably accurate. On cross-country driving trips, I visited key places in the story, or talked with friends familiar with those places.

I also read studies looking at personal characteristics and motivations of people who had carried out mass attacks. One thing in the studies that struck me was that the motivations of perpetrators do not appear to follow a predictable pattern. That gave me considerable license.

Q: How realistic do you think your scenario is?

A: That’s a question I asked family members and friends who edited Blending In for me. They said it holds up on that score. Personally, I like action novels where the bar is set lower than realistic, at plausible. If you’re expecting plausible, you’re less likely to be distracted from an otherwise engrossing story if it sometimes stretches credulity.

A: I roughly knew how it would end, and I made a lot of changes. More accurately, I seriously stalled half a dozen times along the way and had to just wait until the plot clicked, and I could start writing again.

During those times, it made little sense to go to the computer. The screen would have remained blank. I’m in awe of people who obviously are able to write every day, creating the plots needed to churn out a book every year.

A: Marketing the book. I self-published because, at age 73, the challenges of marketing seem more exciting than chasing agents and traditional publishers.

Hopefully within a few months I’ll know what readers think of the book. If I’m encouraged, I have an idea for another novel, again told primarily from the perspective of the terrorist(s).

As an alternative, it is obviously a great time for political novels that have a president mixing things up with my former colleagues in the news business. But there will be a ton of those books, creating fierce competition for readers.

A: An elderly couple plays a prominent role in Blending In. Wilbur has Alzheimer’s. His confusion and stories can be touching or funny or risqué. They are based largely on the experiences of my mother, an aunt and a dear friend, all of whom have died after suffering from Alzheimer’s or other forms of dementia.

When I told another friend I was trying my hand at writing at an action novel, his advice was: “You can’t have too many bullets.” But I like action books that give me an occasional respite from the bullets. That’s what Wilbur and Violet do.