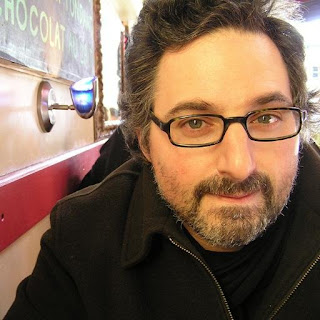 Paul Madonna is the author of the new novel Close Enough for the Angels. His other books include All Over Coffee and On to the Next Dream. Also an artist, his work has appeared in a variety of places, including the San Francisco Contemporary Jewish Museum and the Oakland Museum of California. A former editor at The Rumpus, he has taught at the University of San Francisco.

Q: How did you come up with the idea for Close Enough for the Angels, and for your main character, Emit?

A: At readings and talks, the question I am most frequently asked is, "Where do you get your ideas?" And while it’s a legitimate question, it is difficult to answer, because developing ideas is as much a part of my craft as writing or drawing.

But when I say that my ideas are a product of my point of view, I can see that this answer isn’t satisfying, because it doesn’t explain how to turn one’s point of view into art.

So I decided to write a story that would do just that, about a character whose life provokes him to make art—despite himself—in order to show the nature of where ideas come from. 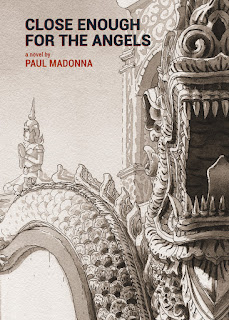 By seeing Emit’s point of view, then watching him experience conflict and loss, we can understand his creative reactions, and in turn, get insight into the creative process.

And so while this book is meant to be an entertaining story—a mystery and a love story—at its heart, it is also an example of the classic writing maxim, “show don’t tell.” Because Emit’s story, and the book itself, is an answer to the question, “Where do you get your ideas?”

Q: The book includes more than 100 of your drawings. Did you do them specifically for this book, and how did you decide on where they were placed within the novel?

A: All of the drawings were made specifically for this book.

Their role is unique in that, unlike a traditional illustrated novel, the drawings do not mimic scenes within the story, but instead, are a separate, integral plot device, as much a part of the story as any character or event. We learn that Emit has made these drawings, but the real story, the conceit of the book, is why.

From the very start I knew this was the relationship I wanted to explore. This idea of demonstrating where ideas come from. Knowing their role in the story, I was then able to identify the major visual themes, such as roads and paths. 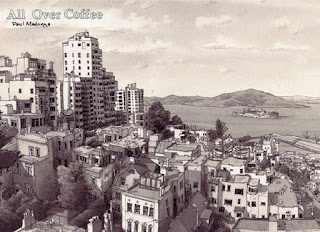 I began all of these drawings on site while traveling in Asia. When choosing which to complete, as well as their placement within the text, my decision-making was done with the same eye as when editing the story.

There were places that needed a beat, or a tonal shift, and I would choose images based on those needs. I began over 170 drawings, and worked on them simultaneously while writing, so I would start new ones, discard others, and choose which to finish in the same way that I would write, edit, or cut scenes.

The book took five years, so it was very much a back and forth process, with both the writing and drawing informing each other. In the end, I used only 106 drawings, because ultimately that was all that was needed for the whole of the book.

A: The title is a play on the aphorism “close enough,” which is a metaphor for Emit’s creative success, but the phrasing is inspired by an event in Emit’s life, which sparks his creative process. As a reader we witness this, and in turn, understand why he would phrase the line this way. 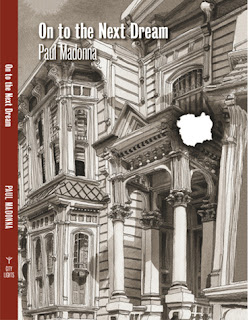 A: I knew the arc of the story—the “why”—which was that a traumatic event would send Emit back to the page to create.

But while this arc outlined how the story would resolve, it didn’t dictate whether that resolution should to be positive or negative. And so deciding the tenor of that resolution—tragic, ironic, satisfying, or otherwise—was a choice I left open for a long while.

In general, when writing a story, I need to know where it’s going in order to adequately craft scenes, but I also have to leave enough ambiguity so that the characters can lead me to places I couldn’t have initially conceived.

With this book, the story ended on a different note right up until the last draft. The tone was poignant, but extremely dark.

And not until the final edits did I realize that this wasn’t where I wanted to leave these characters—or the reader. So I thought about the emotional tenor I wanted to end on, and that’s how I shaped the resolution of the book.

A: I have the outline for a second Emit book, which I’ve already begun writing, but put on the back burner for the moment.

Right now I’m focusing on a project with the de Young Museum and Legion of Honor in San Francisco, a body of drawings and essays about art, artists, and what it means to dedicate one’s life to creativity. This will be my first solo museum exhibition, which will also be turned into a book, opening June 2018.

A: I wrote this book as an intentional shift towards a larger audience. My series All Over Coffee was successful, as were the two book collections, and I wanted to build on that formula of combining drawing and text to tell more accessible stories.

Given that All Over Coffee had initially run in a newspaper, I was limited to short prose, whereas working with the novel form allowed me to explore new territory.

In the same way that All Over Coffee was a reinterpretation of the newspaper comic, Close Enough for the Angels is a new, and hopefully fresh take on the illustrated novel.