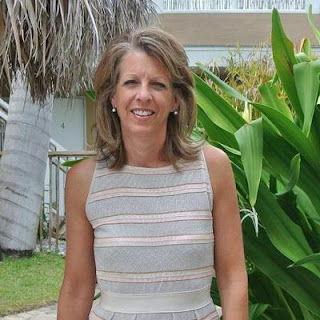 Sharon Neff is the author of the new memoir Until It Wasn't: Love, Loss, and Finding Hope Again. It focuses on her husband's death and the impact on her and her family. She is a freelance writer and blogger based in the Washington, D.C., area.

Q: Why did you decide to write this book, and how did writing it affect you?

A: I started the journal when Wes got sick. I saved a lot of responses, notes, cards, and emails people would send us. It was a motivator to keep going, and I would keep writing it.

There would be months when I wouldn’t write. But it was cathartic to write. After Wes passed away, it became a lifeline. There were many mornings I’d wake up, crying. I would take two steps, get on a chair, crying, and would start writing. If I had a dream about Wes, I would start writing. I’ve made self-discoveries…It hasn’t been on my own, it has been with family, friends, support. Life evolves and gives us some of the answers.

I started taking writing classes at American University with Iris Krasnow. I always wanted to write…I got involved in [this certificate program] and was pretty low still at the time. Iris and the group became an insulator and motivator…

I had all these emotions. Iris pushed me to write about a lot of this stuff. I had about 300 pages, and I brought it to class. She said, Sharon, you’ve got to turn this into a book. She mentored me. It’s been a gift. Through her and the class pushing me, I was making friendships; I found a different way of expressing myself.

When I was having a bad day, I would repeat some of the things I’d recall [from other people's experiences]. If they’d done it, I could. My audience may not be my best friends, but they are people who have gone through this. 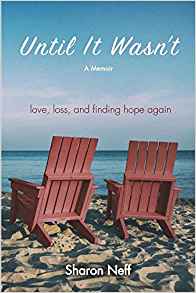 A: The book took me two years. I started it in the classes. Each week we’d have a journal prompt. We could write about anything we wanted. The last hour [of class] was about reading our papers. People would say, That needs to be chapter one or chapter three. It was a cool thing.

A: I think at my worst and darkest times, I did not see hope. Wes was all-encompassing. He created a life for me that was so different from my childhood.

I always felt being with him those 30 years was the safest place I knew. You were loved unconditionally, there was loyalty, he was a funny, happy, great guy. I learned so much from watching him. Not having that has been really difficult for me.

I learned to sit back and watch him; it was one of my favorite pastimes. How he interacted with people was so different from what I grew up with. He could take any person and at the end of the exchange they’d be laughing.

I had the example of someone who was even-keeled, a happy guy. When he wasn’t there, I lost my compass. I struggled with the void. I had been someone who, even when I was down 30-0, I believed I could pull it out, and I couldn’t find any of that. Not that Wes was my only vision of hope, but being around him made it easier to be hopeful.

I hope the vision of the book, even at the worst of the grief…you just keep taking small steps and they do lead somewhere. I am hopeful for a hopeful future. It’s still very difficult being without Wes, but I’m stronger six years out. I’m hopeful again, for the future for my kids, I’ve always been hopeful for them…

Q: You’re writing about some very difficult issues. How hard was it to relive the experiences you write about?

A: For me, I never really got out of it. I was so mired in it. Wes was the heart and soul of our whole family. He was such an anchor for me, yet never controlling. I was still productive, still working, I started out taking voice lessons. I would do hobbies I wanted to learn about. That put me in the setting of being around people.

Through my grief I was able to not feel the anxiety of getting up in front of the class and singing. [The class was] awesome, but I don’t think I ever was out of the grief. This year has been the most freeing.

I had extraneous things going on in my life…my father was in the ICU the same day Wes died. He was having some dementia issues. I had to tell him Wes died. It was very difficult. I was thrust right into all of that, four years of taking care of my dad; my mother died when I was 19. My father never remarried. I would cry going to his house: I’m living his life. It didn’t help me with the hope issue…

Even now reading some of [the book] I laugh at some of the things I’ve written, but it still can bring me to tears.

A: In the book, I introduce the Goons, Wes’s group of friends from childhood. This intense group of guys, they’ve been incredible to the kids and me. They haven’t let us out of their sights, even six years out, as mentors, giving advice if [my kids are] stuck on career stuff.

I’m interviewing them. There are a million stories. They love to laugh. It’s all about having fun. I’ve started it at Wes’s funeral, but it isn’t about Wes per se.

I go back to their childhood and how they were derelicts in a lot of ways but they all ended up being successful. The whole essence of the friendship was loyalty to Wes. He would say, take care of my family. I love Jonathan Tropper’s writing. I don’t know if I can pull it off, but I’m going to try…

A: I’ll pick [the book] up and open it and realize that a large part of it has me rolling around on the bedroom floor [grieving]. It was long and protracted, but even though I’d crumble and cry, there was still growth happening. Even on the worst days, I was still growing emotionally, being productive, moving forward.