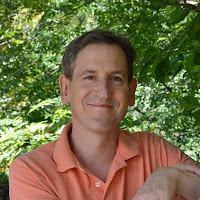 Andrew Speno is the author of The Great American Foot Race, a new book for older kids about the Bunion Derby, a transcontinental foot race in 1928. A teacher for 25 years, he lives in Cincinnati.

Q: How did you first learn about the Bunion Derby, and why did you decide to write a book about it?

A: When I lost my teaching job in the economic downturn of 2008, I reaped a windfall of time that allowed me to pursue an interest in writing. The second project I attempted was the Bunion Derby, based on a feature article I had read in Runners' World several years earlier.

I knew the event would be of interest to middle grade readers and deserved to be better known. I knew I would enjoy telling the story.

Q: How would you describe attitudes toward sports events in the 1920s, and how do they compare with attitudes today?

A: All the factors that go into making today’s big business of sports came together in the 1920s: leisure time, consumer spending, mass media, publicity and promotion, fame as commodity.

Yet, amid the craving for entertainment, there lingered a nineteenth century prejudice against professional sports. Sports as entertainment was seen by some as “a dirty little business run by rogues,” as one observer put it.

C. C. Pyle, the Bunion Derby’s mastermind, struggled against this bias throughout his career as promoter and agent, even as he titillated the public’s growing love of athletic spectacle.

The prejudice took decades to loosen its grip. After all, it was only in my generation that the taboo against professionals in the Olympics fell away. 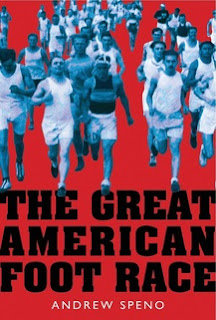 Today, contemporary observers debate whether college athletes in the big money sports of football and basketball should get paid. The tension between athletic achievement and sports entertainment, individual human accomplishment and insatiable public desire, persists.

A: This is my first published book. I made mistakes, learned on the job, doubled back over ground I should have covered more fully the first time. It was a learning process.

A documentary movie from 2001 told the Bunion Derby story to a 21st century public, and the film's website made runner data easily available to researchers from that time on.

Two who followed, one a historian, the other a journalist, produced book-length studies that made possible the Runners' World article I read in 2006--and made my subsequent research infinitely easier.  Charles Kastner understood the story better from a runner's point of view, but Geoff Williams unearthed many of the human interest stories that my children's book needed.

I read many books to better understand the era more than was perhaps necessary. My wide net helped me give context to a singular event that might otherwise seem to come out of nowhere--and fade from historical view with surprisingly little trace.

Online historical newspapers were essential as I got into the sequence of the race. I enjoyed the syndicated sportswriters’ colorful turns of phrase and tongue-in-cheek tone, even when they indicated a lack of reliable objectivity.

Data as basic as runners’ names were not always consistent in the historical record. I encountered at least half a dozen versions for Tobie Joseph Cotton. In fact, it is still unclear to me, if his last name was “Joseph” or “Cotton.”

Giusto Umek was listed in all race materials and newspapers (with one exception) as “Guisto,” but online Italian biographical material clearly lists him as “Giusto.”  I went with the proper Italian spelling.

The story of the Bunion Derby contained many surprises, first among them the fact that it was won by an unknown, 21-year-old journeyman named Andy Payne. Fifteen-year-old Tobie Cotton's participation is surprising enough. That his two younger brothers followed the race across the country, driving their paraplegic father in a beat-up Star Car beggars all belief.

But what pleased me most to learn about was the six-day race craze that arose half a century before the Bunion Derby. Professional “pedestrians” circled a track virtually non-stop for six days. Astley Belt championships paid out thousands of dollars in prizes and filled the second Madison Square Garden with eager fans and gamblers. Professional athletics thrived even during the supposed heyday of amateurism.
Q: You include many photos and documents from the 1920s--how did you find them?

A: I spent dozens of hours on this research--many more, surely, than I will need on my next project! El Reno (Oklahoma) Carnegie Library and the Los Angeles Public Library hold most of the extant Derby photos. The Library of Congress and National Archives were two valuable public repositories. Granger Historical Picture Archive and Corbis (now Getty Images) were valuable private sources.

The images not found at one of the above locations I had to track down through individual emails and phone calls. One exception: the vintage running sneaker on the table of contents pages was located by my publisher--a brilliant addition for which I claim no credit.

A: I have spent several years researching American nurses of the First World War. I am overdue finding a publisher, what with the centennial quickly passing, but that's the way it worked out. I took a year to focus (profitably) on the Bunion Derby.

In the queue: a middle grade biography of Will Rogers and a book with the working title "Automobile Stories."

A: I wrote the book as an avid runner, but chronic injuries and a pinched nerve in the lower back sidelined me after just a couple years. Mine is a cautionary tale for those who might allow enthusiasm to override their better judgment. In exercise, as in other endeavors, there can be too much of a good thing.