Peter Szabo is the author of the new book Finding Maria: A Young Man's Search for His Grandmother, and Himself. He also has written a volume of poetry, Death and Life, and his work has appeared in a variety of publications, including Bioscience and Maryland Historical Magazine. He lives in New York City.

Q: Why did you decide to write this book about your grandmother?

A: I don’t know at what point I decided to write a book. The work just kind of came out as I was in the later parts of the experiences covered in the book and in the process of trying to make sense of them, and putting some of the history together.

Looking back on it now, it was all part of a process of memory formation, the process of turning my grandmother into a memory in the course of working through the experience. 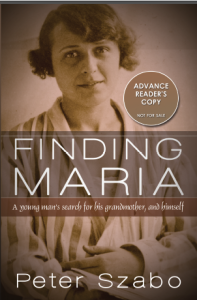 Q: Given the book’s subtitle, what do you think you learned from the time you spent with your grandmother when you were a young man, and how has it affected you since?

A: I think that I learned a lot about life. Through her example and her personality, she taught me that life is both tragic and beautiful, and that that’s OK. The process of maturing is really developing a capacity to experience the tragic, to not run from it, and also to cherish beauty.  Maturity involves holding them both comfortably, tragedy and beauty.

I learned a lot about the complexity of human beings, and about frailty, and strength. We develop to the extent we acquire over time a capacity to take in not only the good but the not-so-good about people, and find a way to love them more richly. I think my grandmother taught me a lot about that, and my aunt and my father did as well.

I think the time with her helped me understand more about life’s complexity. For example, I know that I was headed toward marriage, but I think there was something reinforcing around that that came from my grandmother, about life choices and taking risks.

So, her example of persistence and hopefulness, her delight with beauty, and also her comfort with tragedy, taught me a lot.

Q: How much did you know about your family history as you were growing up, and what particularly surprised you as you found out more from your grandmother?

So what was particularly surprising was the Holocaust and World War II story. I don’t remember if I knew my father was raised as a Catholic, I feel as if that was kind of out there. But I think understanding in more vivid detail his going to the Jesuit boarding school and parading around in the Papal uniform. 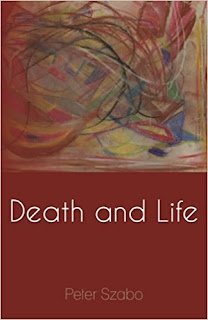 And his own story about wartime experience and confusion around his religion, the ease with which he was able to pose as a Christian when they were in hiding, and his eventual return to Judaism.

I would say also, the questions around her survival, and her bravery in getting the false papers, and finding the hiding places and surviving the bombings.

And the magnitude of the loss across the family – sitting there with her on that bench in Central Park, in my early 30s, and having my grandmother tell me that 60 friends and family were lost in the Holocaust, that was probably the most striking thing I learned through the whole process of discovery. And it transformed the way that I think about myself and my family.

A: (Laughter) What I am working on now is trying to get the word out about this book! But I have also started doing some research on my grandfather. This would be my mother’s father, my Brooklyn-born grandfather.

He was the son of an observant Jew, grew up in Brownsville, Brooklyn in the early 1900s, fought in World War I, earned a Purple Heart, played professional basketball in its early years in the late teens and 1920s, and had a thriving plumbing business as Brownsville and Flatbush were built out, until the Great Depression hit.

I’ve started exploring some of the history around that period, and I’m considering doing something related to his early life or related to the early years of basketball.  I haven’t zeroed in on the next step there yet.

A: I hope that people are inspired by this book to go out and get the story from the older people around them. It might be your parents. If you are young enough, it might be your grandparents. Everyone has got a story, and it doesn’t have to be about surviving the Holocaust in Budapest and escaping Communism to come to America.

On a simple level, you are helping them, reducing their isolation, increasing their connections to the world. But it goes far beyond this.  The rewards of building a more extensive friendship with an older person in your life are many.

I think in the process of doing that you also grow and you forge a much fuller identity. I know “identity” has become kind of a charged word these days, but I think that’s a shame.

We are all stronger with a deeper and richer sense of our identity. To look in the mirror, to walk around each day, to interact with our loved ones with a stronger sense of self gives life more meaning, and makes the world a better place, I like to think.