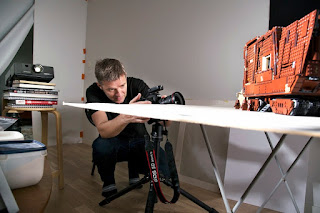 Vesa Lehtimäki is the author of the new book Small Scenes from a Big Galaxy, a series of photos involving Lego Star Wars minifigures. He is an illustrator and photographer whose work has appeared in a variety of publications, including Wired and The Huffington Post. He lives in Helsinki, Finland.

Q: You first started this project as a way of photographing your son's toys. How did it end up becoming a book?

A: Well, since I was already making a photobook of the toys, I started playing with the idea and made a little book of the snowy Lego Star Wars photos I had in 2011. I made one in Blurb and gave it to my son as a birthday present. It turned out really nice and I made an English-language version of it too just in case; I even offered it to few publishers but to no avail.

In the summer of 2014 I had the opportunity to shoot some Star Wars photographs for Lego. During that process the little Hoth book came up and they got interested in it. One thing led to another and in the fall I got a call from DK and we discussed it further. It was a long process which required a lot of work.

Originally the big book was going to be a compilation of my existing photographs but I wanted to shoot new material exclusive to the book. In May - June 2015 I shot about 15 new photographs that I haven’t posted elsewhere, they’re only in the book. Well, they are all over the web since they became a part of the promotional material for the book, but it’s the thought that counts, right?

I’m very happy how the book turned out.

Q: How much do you plan out your Lego photos before shooting them? Do you draw plans for them first, or do you experiment as you go along?

A: It varies. I need to have an idea before I take out the camera; sometimes that’s enough but sometimes when I don’t have the opportunity to shoot right away I make small pencil sketches so that I don’t forget my ideas. When I have the time I use the sketches as a base from which I can start.

During the shoot itself I like to go with impulses. If an idea doesn’t seem to work, I keep pushing it until it does – or I until abandon it. It happens a lot. Some of my best photos have come from photosessions that bombed and evolved into something different while trying. That’s very enjoyable, I like the surprise when this happens even if I’m behind it myself. 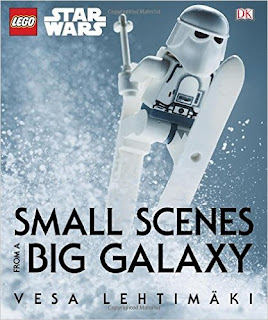 Q: Many of the photos involve snowy scenes. How often do you use actual snow, and what do you use as a substitute?

A: I have not used actual snow in any of my photographs. Well, there is one close-up of an Action Man action figure that has some snow on it, but that’s it.

Real snow doesn’t scale down with models or Lego figures; it has to be replaced with something else that looks the part. This was one of the challenges I faced in 2009 when I set out to do this.

Initially, I created this wacky method of submerging Lego minifigures in an old transparent acrylic cd-record container filled with water and pouring plaster powder on the setup. The powder, which was ground from some old molds with a cheese grater, fell slowly and nicely on the minifigures in the water.

This was so weird that some websites posted about it and I got my first experience of being noticed on the web. It was such a powerful introduction to my photographs that I still get questions about how I manage to shoot my setups underwater. The funny thing is that I haven’t done that since December 2009.

I wanted a water-free solution because the water container I had was way too small for what I wanted to do. I experimented with a lot of stuff from plaster and icing sugar to talcum powder before I found baking powder in January 2010. It’s perfect for small-scale snow and I haven’t changed it since.

Q: As a longtime Star Wars fan, what are your expectations for the new film?

A: I would say I’m a reborn fan. The background information on the original trilogy available today is just wonderful; I love to pore over tidbits on the original filming models and props. It appeals to the designer in me.

I have high expectations for the new film; I’ve had them from day one. That is, from the day J.J. Abrams accepted the challenge.

I have liked all references to the original trilogy they have made during the production of TFA. Shooting on 35mm film and using Ralph McQuarrie’s unused designs as a base in creating some of the new worlds, like the new blue X-wing fighter, just hits all the right chords for me. But it’s not all that I expect from this movie; nostalgia alone doesn’t cut it.

I would love to see a Star Wars movie thematically as mature as The Empire Strikes Back, something more sophisticated than your average space opera. I love space operas as such, but for this I’m crossing my fingers in hope for something that at least makes an attempt to be more than a mere entertainer. Entertaining and intelligent do not rule each other out.

I know my expectations are a bit out there but one can wish. Whatever The Force Awakens turns out to be, I’m sure I’ll enjoy the ride. I’m going to see it with my son and I suspect I’ll have trouble focusing on the movie and not watching the kid’s reactions. You know? I’m happy with that, everything else is a bonus.

A: I’ve been very busy with the Small Scenes from a Big Galaxy book; I have had problems finding the time for new projects. There is one scale model I’m working on, something very different from what I’ve done so far. The model should have been finished weeks ago but I got caught working on one meaningless detail on it for about a month. It won’t really show in the planned photos but I just need to know it’s there.

Other than that, I don’t really know what’s going to happen next. I think I’ll take it easy until the year ends and then I’ll just grab something and shoot.

A: Hmm, I can’t think of anything.