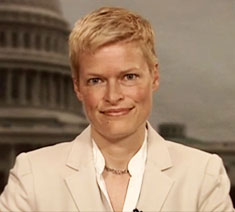 Kerry Eleveld is the author of the new book Don't Tell Me To Wait: How the Fight for Gay Rights Changed America and Transformed Obama's Presidency. A former reporter for The Advocate, she is now a columnist for Daily Kos. Her work has appeared in a variety of publications, including Salon, The Atlantic, and The Daily Beast. She lives in Berkeley, California.

Q: In the book, you ask, “Was Obama’s evolution [on same-sex marriage] born of principle or political expediency? Did he lead the nation or follow it?” What is your answer to these questions?

A: First of all, in terms of whether he led or followed, he was smack-dab in the middle. The answer is, a little bit of both. He followed half the nation and led half.

Both signal something politically. It’s a good way of looking at the book. It was a mixed bag. He had to be pushed, but then he cleared the way for people following the trend line….

He provided some leadership but trailed the trend line initially. He wasn’t what people thought he’d be when they voted for him—they thought he’d be ahead of the curve. That’s why I look at it as a mixed bag.

Some might say [his stand] was principled—he couldn’t have been elected, and wouldn’t have been able to bring people along and get them to support same-sex marriage along with him. People could make the argument it was both.

People are trying to figure out when did he change his mind? Was he really pro-same-sex marriage already? Did he change his mind partway through? This is a question that still dogs him to this day…Aides don’t want people to think he was behind the curve [but] at the same time you don’t want it to look like he was lying about his civil union stance. It’s still a problem for them…

More important than when he changed his mind and whether he was pro-same-sex marriage when he came to office—at some point he’s going to write a book, and I’m not sure we’ll even know then—more important is that the LGBT movement changed the goalposts from the time he was elected in 2008 and was reelected in 2012.

His advisors, and Barack Obama himself, decided the best political stance was civil unions. It was exactly the opposite stance four years later. The more important story to me is that the goalposts moved on what would make him more electable…. 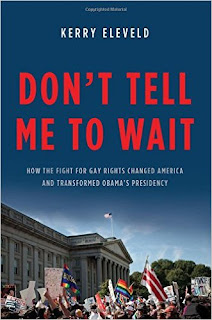 Q: You describe a “tipping point” in the history of gay rights during the Obama administration. What accounted for the tipping point, and why did public opinion shift during this time?

A: In some ways they’re related, but it’s two separate questions. The tipping point in the book is the political tipping point in Washington. LGBT issues go from toxic and untouchable to a winner for the Democrats.

That tipping point was helped by public opinion, but not completely determined by it. Washington is in a bubble [ruled by] conventional wisdom…

On Don’t Ask, Don’t Tell repeal, the polling was at between 65 and 70 percent going into 2009. Those types of numbers should have given nervous Democrats a spine. But Democrats were still afraid of taking that vote. You have to prove to politicians there’s a bigger downside to not acting than to acting.

LGBT activists managed to convince politicians that there would be a bigger downside to not acting on LGBT issues than acting.

Through all the protesting that happened through 2009-10, Democrats and the White House started realizing, We’re going to take it on the chin over and over on this issue unless we make it go away.

They still had to be pushed, but it was clear that if repeal didn’t happen, it would be a big problem in terms of fundraising and bad press in the progressive movement.

The same was true for same-sex marriage…it wasn’t just activists, it was watching the polls shift and state after state started legalizing same-sex marriage. Obama’s position was looking antiquated. He and his aides came to a decision that they were going to do something on this. It was in the middle of an election year—ideally, you make [changes] in an off year.

Public opinion is not deterministic, but it is helpful. On a slightly separate note, a lot of pollsters say, I’ve never seen anything like this in my lifetime. No one would have imagined in 2004 and 2006 that a decade later we’d end up with marriage equality.

One reason politicians and journalists had a hard time was that it’s an emergent movement. People are coming out to [those they know]. You didn’t have a central figure like you did with Martin Luther King, Jr. He was a way to gauge how much energy the civil rights movement was gaining…

Q: You write, “I had gone to bed every night and awoken every morning wondering, what question can I ask, what story can I write, what truth can I reveal that will help clear the path for repeal [of Don’t Ask Don’t Tell].” What do you see as your role in covering these issues as a journalist?

A: I definitely struggle with the question, Am I a journalist or am I an activist? I evolved into an activist. In the first couple of years I was covering the White House, I saw myself as a journalist, covering a beat. There was no question what was right and wrong…that maybe separated me from other mainstream journalists…

It wasn’t a question of that type of “objectivity.” For me, it was my role to uncover the discrepancy between the campaign promises Barack Obama made and what actually was happening.

I was trying to provide transparency so LGBT Americans who had voted for him would have the information they needed about what to do, whether the [administration] was proceeding to achieve their campaign promises…

Q: I know we’ve discussed that it’s hard to know exactly what the president’s views were, but what impact do you think the vice president’s remarks on same-sex marriage had on the president?

A: I’m not so sure it had very much effect on the president’s views, but the vice president’s remarks pushed the White House past the point of no return. President Obama first mentioned he was evolving in October 2010. Then he started repeating the “evolving” scenario.

That had been going on—by the time we get to the spring of 2012 no one in their right mind believed someone could be evolving for that long and hadn’t reached their destination. How long can you continue to roll that out? As I noted in the book, he started saying things like, That question has been asked and answered. It was wearing incredibly thin.

By the time Vice President Biden goes on Meet the Press and signals he has no problem with same-sex couples getting married, you have his White House trying to hold back the floodgates.

They tried saying, Biden is in the same place the president is, but no one took Biden’s comments that way…

Q: What do you think of how the presidential candidates are dealing with gay rights issues, and what do you see looking ahead?

A: The comparison between Democrats and Republicans is a no-contest situation. None of the prominent Republicans are signaling themselves as friends of the LGBT community.

Even younger people--Marco Rubio is saying, I’m going to appoint Supreme Court justices who might roll back marriage equality. He’s signaling that he wants to get it done. Same with Ted Cruz.

There’s all this talk about a war on religion in this country. There are not a whole lot of positive signs coming from the Republican side. I’m sure there are Republican strategists who might try to paint a different story, but I don’t buy it.

The American public has moved beyond…where the Republican base is on this, the smaller slice, the primary and caucus-goers. It’s not necessarily inclusive of the whole broad Republican party. Hillary Clinton has positioned herself as a friend of the LGBT community, as has Bernie Sanders…

What I’ve seen from LGBT activists, I don’t see them being quite as active as the activists [involved with] the dream movement, climate change, Black Lives Matter…

If there’s one thing that intrigues me, it’s what I see [with] Obama-era movements, the resurgent progressive movement that developed when a lot of progressives who helped elect Obama were not thrilled with his first two years in office, when Democrats had both houses of Congress [and the White House]….

If there’s one thing I would want to look at for a second book, it’s looking at the power of these progressive movements, and whether they will provide a course-correct for the country’s drift to the right…