Edward Hamlin is the author of the new book Night in Erg Chebbi and Other Stories. His work has appeared in a variety of publications, including The Missouri Review and Colorado Review. He lives in Boulder, Colorado.

Q: Your stories take place in a variety of locations. How important is setting in your writing?

A: It’s really important. I’m a five-senses writer—I’m really paying a lot of attention to all five. The setting is an important way to nail that in if you’re in a place that exotic to the character….It’s a way to pull the reader in to the story, and myself too!

Q: Speaking of senses, how did you come up with the idea for the story "Light Year," about the photojournalist who’s going blind?

A: I had a couple of acquaintances who were facing something similar…And the Chicago writer Richard Stern—I met him at the end of his career. I wasn’t his student, but I got up the nerve to approach him…He said he was saving his eyes for his students, that he was going blind, that he would have been happy to [read my work] earlier.

The theme of going blind was in the back of my mind for a long time, and it dovetailed with the theme of if you’re a creative person and you lose your creative capability, how do you adapt to the loss.

Q: Do you know how a story will end before you start writing, or do you make many changes along the way?

A: There’s no pattern. In some I might have had a closing image or scene in mind. I wrote a novel where the germ of it was being in a hotel on a road trip, and seeing a father in a pool with his disabled son, helping him float. It moved me. I had it in mind as a closing scene.

It became the closing scene of a novel. It morphed from a disabled child to becoming an elderly mother-in-law with Alzheimer’s. I started with the end point in my mind.

Normally I don’t necessarily know the ending. If the reader is surprised, it’s helpful if the writer is surprised. In a way, I don’t want to overthink it too much… 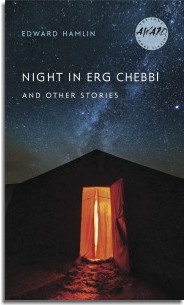 Q: How did you come up with the idea for the title story in the collection. "Night in Erg Chebbi"?

A: That started life as a flashback inside another story. I needed the characters to have had an interlude in an exotic place. I started writing it at a time when the Middle East wars were in the news a lot.

Somewhere in the course of that story of a tourist visit to Morocco, [the story] started getting an overlay of what was happening in the Middle East. It grew into a story of its own. I probably won’t do anything with the original framing story.

I’ve been very interested in and moved by the difficulties in reconciling private experiences with these wars and public or political experiences. I’m trying to empathize my way into the world of people dealing with this, having family members as soldiers.

They might be against the war, but they have family members in the war. The woman [in the story] can’t resolve the conflict with her brother because he died.

A: There are so many! That’s an unfair question! If I turn the clock back, probably the writer who inspired me was the Chicago writer Stuart Dybek, who I admire to this day…[his work] got me excited about short stories.

I’ve gone through many phases. Nowadays I feel kindred to Anthony Doerr; [his writing] speaks to me a lot. And there are fantastic younger writers out there.

Q: You also are a musician. What is the relationship for you between writing and music?

A: That’s an interesting question I’ve thought a lot about. There are two levels of it—the daily life of two creative outlets playing off each other.

For a lot of years, I’d be deep into music and then I’d burn that out a little bit…and then swing back over to writing. I might write something that’s emotionally exhausting…and then go back to music. There was a nice sort of play between the two.

Now, the writing is getting some momentum…I’m doing less of the music.

On a deeper level, both art forms for me have to do with improvisation. I move both forward through happy accidents. I might be playing the guitar and stumble on a phrase that’s not in the key of the song. I realize it’s interesting, and will steer the composition in a different [direction].

Writing often happens in a similar way…I’ll stumble over an intriguing tidbit and take it in a different direction.

A: Friday is my dedicated writing day. I’m working today on finishing a short story that, with some modifications, will probably become the prologue to a novel I’ve completed. And I’m really looking for one more story to round out my second collection.

A: I’ve gotten questions in the past about the strong female protagonists [in my stories]. People ask questions that make you think about your work in ways you never did…

I’ve given it some thought and I think I’ve had really strong women in my life. My mother is 89; she’s high-functioning, independent, smart. She’s a role model for healthy aging. Going back to my earliest awareness, there was that model.

I’m lucky to have been in relationships with strong women. I’m married to one now.

Women, even in this day and age, are up against it. [With] fiction about conflict and tension—even in this time and culture, women have it harder than men.

As a writer, I’m more interested in [seeing] how female characters will respond than male characters. It’s presumptuous of me, but that’s what writers do.

I finished my novel—it’s [from] the point of view of a 17-year-old Northern Irish girl, young woman—it’s 100,000 words, a long story! She leaves Northern Ireland at the height of the Troubles and winds up in Haiti.

I’ve been trying to live in exotic places in the body and heart of a 17-year-old girl. It’s a heavy lift, but a lot of fun…