Q: Why did you decide to focus on baseball in the summer of 1976 in your new book?

A: My previous book, Big Hair and Plastic Grass, was a decade-spanning look at the many changes that occurred (and characters that popped up) in baseball during the 1970s.

Of all the seasons I wrote about for that book, 1976 seemed particularly ripe for a book of its own. There were so many different and fascinating threads running through that season — the Big Red Machine’s unstoppable drive to a second-straight World Championship, the return of the Yankees to prominence after over a decade in the wilderness, the rise of the Phillies and Royals as contenders, the promotional antics of Bill Veeck and Ted Turner, the clashes between Charlie Finley and Bowie Kuhn, the owners’ spring training lockout of the players, the removal of the reserve clause and the subsequent onset of full-scale free agency — that I knew it would make for an entertaining and enlightening book, even though the pennant races and the World Series (the two things that usually drive books written about specific baseball seasons) weren’t going to show up on anyone’s “all-time greatest” list.

And when you also factor in the prominent presence of such legendary baseball characters as Mark “The Bird” Fidrych, Dock Ellis, Reggie Jackson, Dick Allen, Billy Martin, Bill “Spaceman” Lee, Dave “Kong” Kingman, Oscar Gamble — and the release of The Bad News Bears — 1976 becomes a real feast for anyone interested in baseball during this tumultuous and colorful era. 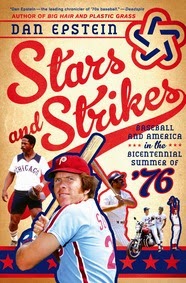 Q: What was the most surprising thing you discovered in the course of your research for the book?

A: Before researching Stars and Strikes, I knew that the San Francisco Giants had almost moved to Toronto, but I hadn’t realized just how close they came to actually being sold to the Labatt’s corporation in early 1976 — in fact, the deal was already done when mayor George Moscone obtained a court order to put the team’s move on hold until he could find local buyers who would keep the Giants in San Francisco.

I also hadn’t realized how close the “lords of baseball,” commissioner Bowie Kuhn included, came to cancelling the entire season in the face of losing the Messersmith/McNally decision (which did away with the reserve clause) in arbitration and then in court.

The fact that they even considered trashing the national pastime on the eve of America’s 200th birthday — and that they felt as if they were coming from higher moral ground in doing so — really drove home for me just how painfully out of touch so many of baseball’s owners and executives were at the time.

Q: What impact did the Bicentennial celebrations have on the events of that summer?

A: The Bicentennial was another reason I really wanted to write Stars and Strikes, just because I wanted to go back and explore what was really a very unique period in modern American history — an all-too-brief window of peace and celebration where, post-Vietnam and post-Nixon, we felt compelled as a people to embrace our inner Ben Franklin rather than our inner John Wayne. (And embrace our inner consumer as well, as we were being deluged with “special Bicentennial edition” everything from pop bottles to pornography.) 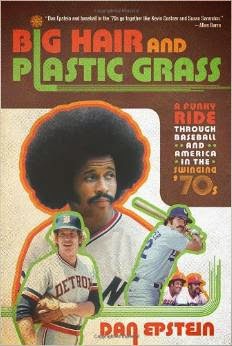 The Bicentennial made for a wonderfully festive backdrop for the 1976 baseball season, though the sport and the celebrations mostly just crossed paths in the form of lavish pre-game ceremonies. But it was very interesting to me that major league players were fighting their own revolutionary war against baseball’s antiquated policies in a year where the country was celebrating the 200th anniversary of the Declaration of Independence.

Q: Do you have any predictions for this year’s World Series?

A: It’s very tough to predict how this post-season is going to play out, especially with the recent changes to the Wild Card. All of the teams in contention are flawed in some way, so it really depends on who can get (and stay) hot at the right time.

As much as I loathe the Angels (I’m a diehard Tigers fan), I can’t deny that they’ve been looking unstoppable in the second half. An Angels-Dodgers World Series wouldn’t surprise me at all — and as a resident of Los Angeles, I would definitely welcome a “Freeway Series.” Still, I’m holding out hope that the Tigers will go all the way, rickety bullpen and all.

A: I’m currently juggling freelance gigs for a number of print and online publications — including RollingStone.com, where I am employed as their regular baseball columnist — while beating the bushes for a steady editorial gig. I’m also working on the proposal for my next baseball book; I can’t reveal much about it yet, other than that it will also draw upon the 1970s. It’s simply too rich of an era for me to walk away from just yet.

A: I think there may be a misconception in come circles that my books are merely exercises in campy 70s nostalgia, which is not the case at all. I do have a genuine appreciation and love for this era, and I want my books to shine a brighter light on what was happening then, both in baseball and in the popular culture that the sport collided with.

But the 1970s weren’t all disco balls, sequined bell-bottoms and groovy Afros; it was a very troubled and confusing time, filled with bad vibes, worse drugs and countless lost souls. I was born in 1966, and was aware from a pretty early age that I had landed in a really turbulent era — though when I was falling in love with baseball, I had no idea that the sport was going through numerous challenging changes of its own.

So in addition to being sort of time capsules that will immerse the reader in this era, I wrote these books to help me make some sense of the decade in which I spent my formative years, as well as the changes and challenges that the National Pastime faced in that decade. And hopefully, these books will offer similar illumination as well as entertainment to those who read them.