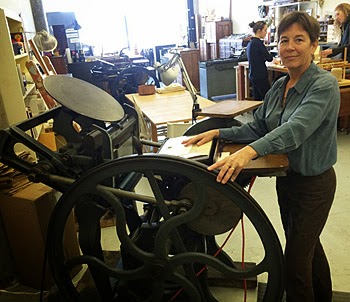 Alix Christie is the author of the new novel Gutenberg's Apprentice. A longtime journalist, she also is a letterpress printer. Christie grew up in California, Montana, and British Columbia, and now lives in London.

Q: How did you first develop your interest in printing?

A: My grandfather was a printer and the foreman of the last major hot type foundry in America, Mackenzie & Harris in San Francisco. I was his apprentice, starting at age 16; we made several books together over the years. I also apprenticed at another fine printing shop, the Yolla Bolly Press, in northern California, though I was training as a journalist at the time.

I still own a letterpress, which I loan out to printers in S.F., since I’ve been living abroad for so many years. I love making things with my hands, and printing is a uniquely satisfying way of making art for a writer who can’t draw! I am looking forward to the day when I go home and set up my own printshop.

Q: Why did you decide to write a novel based on Gutenberg and his apprentice, and how did you blend the historical and fictional aspects of the book?

A: I became intrigued by some research published in 2001 that suggested Gutenberg’s technique was not as advanced as generally thought. I did some digging and discovered the existence of Johann Fust and Peter Schoeffer, both of whom were well known to scholars but not to the general public. 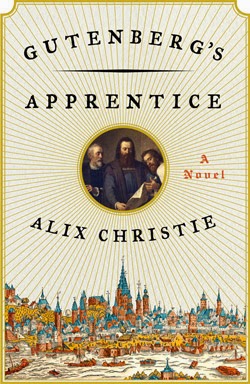 Once I realized that this historic partnership had blown up in a lawsuit, I found myself wanting to get to the bottom of how and why their partnership imploded. The surviving sources are mute; very little physical evidence exists, especially for the key years of 1450-54.

As a journalist as well as a writer of fiction, it was important to me to hew as closely as possible to what is factually known. The facts served as a scaffold, over which I tried to construct a plausible narrative for why this historic partnership might have hit the rocks.

A: I read massively in the piles of Gutenberg research in German, English and French. I interviewed and became friends with the world’s two main experts on Gutenberg and Schoeffer, and discussed my theories with them both.

At the same time, I made a few trips to Mainz, Eltville and Frankfurt, and really tried to drink up the physical setting of the Rhineland. I was very lucky in that I was living in Berlin, and could spend time in the actual locations.

For each successive draft of the novel I found I needed to know more, and dipped back in. For this the internet is nothing short of miraculous. The most incredible find was the actual library catalog of St Jacob’s Benedictine monastery in Mainz dating from 1444, which had been reprinted in the 19th century and scanned into Google Books!

A: I didn’t expect to write historical fiction, particularly. (My previous writing has been contemporary). But once I was embarked on GA (which took seven years total to research and write) I found Hilary Mantel to be a guiding light. She’s a genius. I’m also inspired by W.G. Sebald, Elena Ferrante, Ron Hansen, Junot Diaz, Marilynne Robinson and Geraldine Brooks.

A: I’m embarking on another historical novel based on my family history, of Scottish emigrants who became fur traders in the American West.

A: Two things: that my long journey to publication is proof that sticking with it is the most important thing. And that we have much to learn from the past, especially now: how Peter Schoeffer faced this dramatic new technology was, for me, a way to investigate my own ambivalence toward the digital world that increasingly surrounds us.

I also have a fairly comprehensive Q&A on my website, at the bottom of the Author page. If you haven’t checked it out, please do, I’m very partial to all the beautiful images.