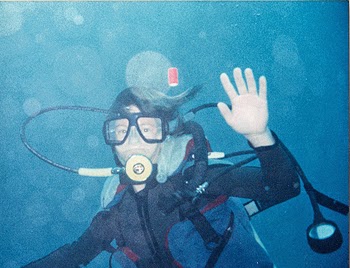 Polly Holyoke is the author of The Neptune Project, a middle-grade novel. The sequel, The Neptune Challenge, will be published next year. A former middle-school teacher, Holyoke grew up in Colorado and is based in the Dallas, Texas, area.

Q: How did you come up with the world you created in The Neptune Project, and why did you decide that dolphins would play a big role?

A: A scuba diver for many years, I wanted to write a book that truly depicted what the world under the waves looks, feels and sounds like. When my characters ventured to places I hadn’t been diving, I spent a lot of time on local scuba diving sites reading accounts of what that area looks like and what marine species my kids would probably encounter.

I’ve always loved dolphins and been amazed by their intelligence, and I knew my Neptune kids would be extremely vulnerable when they went into the sea. The dolphins increased my characters’ chances of survival. What I didn’t expect, though, is the way some of my dolphin characters took on such interesting and strong personalities!

Q: How did you research this book, and as you wrote, how did you find the process of blending the plot and characters with the environmental information you wanted to include? 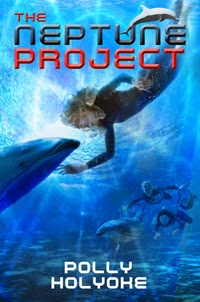 A: Because I’m more of a literature and history person, I had to stretch my brain researching oceanography and genetics. Of course, swimming with wild spinner dolphins in Hawaii and domesticated dolphins in Florida were my favorite research experiences!

I tried not to get too preachy about environmental issues and state outright the challenges unchecked climate change will cause us. Instead, those problems, such as ocean rise and food and fresh water scarcity, shape the plot of the book and the troubled world that confronts my characters.

Q: How does your previous career as a teacher help you with your writing?

A: My experiences as a teacher helped and continue to help me understand how kids think and act, particularly when they are in groups. I write about 10- to 15-year-olds, and that’s an age full of social insecurities.

At the same time, readers that age are enormously curious and open-minded in a way older readers sometimes aren’t. I have yet to encounter a kid who has problems believing in the idea that we might be able to genetically alter ourselves to breathe seawater someday!

In a more practical sense, I’m finding I’m a popular speaker at schools because I can actually teach lots of different writing workshops along with talking about my experiences as an author.

Q: The sequel, The Neptune Challenge, will be published next year. Did you know when you started on The Neptune Project that the story would continue, and do you plan to turn it into a longer series?

A: From the start, I plotted the Neptune books as a trilogy. I understand, though, that my publishing team didn’t want to commit to a three-book series until we saw how well the first book did.

Now they have bought the second book, and the plot appears to be all tied up at the end of The Neptune Challenge, but I still have plenty of ideas for that third book if the second one does well.

A: I’ve always loved Robin McKinley. She won the Newbery for The Hero and the Crown. I also read and reread The Chronicles of Prydain by Lloyd Alexander when I was a child. 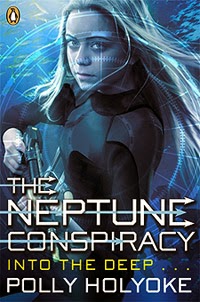 A: The Neptune Project is such a thrilling, fast-paced read, it keeps kids turning pages (or so their happy parents tell me). At the same time, the book contains scientific elements and lends itself well to cross-curriculum teaching. I just finished posting teacher guides on my website.

I also tried to make that website as kid-friendly as possible with colorful pictures along with links to some of the most interesting sites I found on the web about dolphins, sharks, oceanography and climate change.

On my website I’m also giving away free copies of the UK version of The Neptune Project (The Neptune Conspiracy), which has a very striking cover.