Deborah Halber is the author of the new book The Skeleton Crew: How Amateur Sleuths Are Solving America's Coldest Cases. Her work has appeared in a variety of publications, including The Boston Globe and MIT Technology Review. She is based in Boston.

Q: How did you get interested in writing about amateur sleuths who solve cold cases?

A: In 2010, I spotted a photo in The Boston Globe of a woman with wide-set eyes and a luxurious auburn ponytail. It turned out to be a digital reconstruction of a 1974 murder victim in Provincetown, Mass. Her hands were missing, her skull was bashed in, and she had never been identified.

When I Googled “Lady of the Dunes,” I found a small city’s worth of unidentified human remains. How, I wondered, could all these people be missing their names?

The more I looked, the more ominous the problem seemed. By some estimates, there were tens of thousands of bodies, languishing in back rooms of morgues and buried in potters fields. It was one of saddest examples of national neglect I had ever come across.

Then I found the Doe Network, and Todd Matthews, and I realized there were people out there who were bypassing law enforcement, taking matters into their own hands, trying to match the missing with the unidentified.

The surprises were (1) that people would take on such a bizarrely morbid hobby where the chances of actually accomplishing anything seemed infinitesimally small and (2) that they were succeeding.

Q: The case of “Tent Girl” plays a big role in the book. Why did you decide to focus on that case in particular? 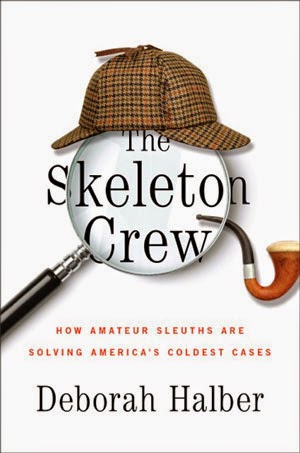 A: The story behind Todd Matthews’ identification of Tent Girl is a story of rags to (relative) riches, triumph of the underdog, and revenge of the nerds all rolled into one. Tent Girl also invoked a murky psychological morass of death and identity that I felt perversely compelled to explore.

A: In addition to the points mentioned above, I am continually surprised that so few people are aware that the problem of the unidentified exists.

My research dissipated my own ignorance and prejudice—I initially assumed that the unidentified were unidentified because they were homeless, or had chosen to separate themselves from their identities. This was largely not the case. Many of the unidentified are missed and have family and friends searching for them—they just don’t know where to look.

Q: How was “The Skeleton Crew” chosen as the book’s title?

A: I came up with more than a dozen possible titles. My editor at Simon & Schuster, the talented Sarah Knight, chose “The Skeleton Crew.”

A: There are ongoing stories that didn’t make their way into the book—compelling, disturbing stories such as that of 22-year-old Jacob Whitt, who was buried in an unmarked grave for more than a decade before a web sleuth helped identify him. He was declared a suicide, which his mother doesn’t believe, and she has been fighting to re-open his case.

I’m working on magazine pieces on stories such as these to bring these issues to light.

A: I have the utmost respect and admiration for the web sleuths, who, on top of their own job and family responsibilities, volunteer countless hours, poring over gruesome images and details, mired in other people’s misery and horror, with no guarantee that they will get anywhere, or if they do, that they will receive any recognition or reward beyond the knowledge that they helped provide closure for a stranger.