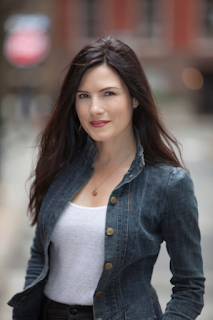 Nicola Harrison is the author of the new historical novel The Show Girl. She also has written the novel Montauk. She lives in Manhattan Beach, California.

Q: What inspired you to write The Show Girl, and how did you create your character Olive?

A: I became inspired to write The Show Girl after learning about the Great Camps built by Gilded Age magnates along the rugged lakeshores of Upstate New York for an article I was writing for a luxury travel magazine.

One camp in particular, White Pines Camp, was President Coolidge’s “Summer White House” and its original owner’s wife had been a Ziegfeld girl. My family and I stayed at the camp to learn more about it and I learned that this owner’s wife had been known to be “a real party girl” who had fully stocked bar carts set up on the trails so her guests were never long without a cocktail.

I was completely fascinated and it was the launching point for me to create this outgoing and ambitious (and often flawed) character – Olive Shine.

Q: Why did you choose the late 1920s as the time period in which to set the novel, and how did you research the Ziegfeld Follies?

A: I’ve always loved reading about the 1920s and am fascinated with this glamorous era.

From 1907 to the early 1930s, the Ziegfeld Follies was the most spectacular American revue, paving the way for all future Broadway shows, so it made sense to set my novel in the midst of the roaring ‘20s when life felt like one big party for a lot of people.

It was an absolute treat to delve into this decade and really understand the motivations of the flappers, the impact of Prohibition, and of course the events that brought the party to a crashing halt.

What really made the Ziegfeld Follies an event was its showgirls who were advertised as “the most beautiful women in the world.” 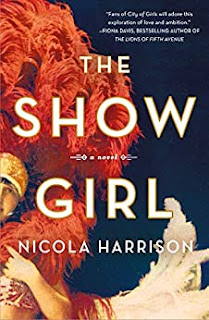 I read a memoir by Doris Eaton Travis who was the last surviving Ziegfeld girl (and who lived to be 106) and many books about the follies and Mr. Ziegfeld himself.

I learned about how the women were selected, their rigorous rehearsal and performance schedules, their elaborate costumes, and their many, many admirers at the stage door.

Q: The novel takes place in New York City, but also in the Adirondacks. Can you say more about what intrigued you about that location?

A: Once I learned about these “Great Camps” in the Adirondacks I couldn’t get them out of my head. They were described as “rustic retreats” but they were actually very lavish compounds, many with tennis courts, bowling alleys, ballrooms and boat houses.

Despite being hidden away deep in the woods in upstate New York, guests still dressed for dinner in cocktail attire and tuxedos. I love that juxtaposition of extreme glamor against the woodsy, rugged, mountainous backdrop.

At first I thought the whole novel would take place there but my protagonist, Olive, was such a strong and determined character, she pulled the story to the stage in Manhattan, so we get to experience the best of both worlds in this book.

Q: What do you think Olive's career says about women entertainers in the 1920s?

A: Florenz Ziegfeld held his performers to such a high standard that they were truly the celebrities of their time. He could make them a star overnight, but if they fell out of his favor, they could also be dropped in a second.

Despite being ambitious and talented and gutsy, Olive still needed the support of powerful men in order to truly make it. I like to think we’ve come a long way since then, but unfortunately that’s not always the case in the world of showbiz.

A: My third novel is set in the 1940s right after WWII and takes place in Southern California – very different from my past two books. I just moved back to California after 17 years living in New York City so it’s fun to be back and to be immersed in the place I’m writing about.

A: I loved writing this book and I’m so excited for readers to enjoy it. I hope you’ll check out some of my virtual or in-person events which are listed on my website www.nicolaharrison.com and follow along on my publishing journey on Instagram or Facebook @nicolaharrisonauthor

Thank you so much!!