Helen Rutter is the author of The Boy Who Made Everyone Laugh, a new middle grade novel for kids. An actress and stand-up comic, she lives near Sheffield, UK.

Q: How did you come up with the idea for The Boy Who Made Everyone Laugh, and for your character Billy?

A: The book was inspired by my son Lenny, who stammers. I wanted to write a book staring a character like him. We had never read anything about someone who stammers before and so I thought it was a story that needed to be written; at that point I had no idea if it would be published!

The stand-up comedy element comes from my experience of doing stand-up. I have also been married to a stand-up comic for nearly 20 years and so it was bound to seep in!

Q: You've also been an actor. How do writing and acting come together for you?

A: It is all telling stories and that is what I love doing, whether it’s on the stage or on the page. I think I always come at stories from a character’s point of view first and then the plot comes later and that’s, most likely, down to the acting side of things.

I also think that writing one-woman shows, in which my character talks directly to the audience, was brilliant preparation for writing a book in first person as I love finding a character’s “voice.” 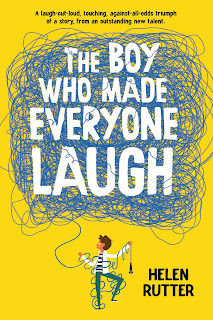 A: No! I made huge changes along the way. The first draft was essentially all character and very little plot!

I realised that I needed my character to really want something that the stammer would get in the way of, which is where the comedy came in. At that point the story really came together and didn’t change massively from then, but my wonderful editors helped it to grow and become more rounded.

A: My research mainly came in the form of living with a stammerer. Speech therapy played a big part in my understanding of stammering.

I think the biggest realisation that I had, during the time that me and Lenny were going to speech therapy, was that the best and only thing that I should try to do when Lenny got stuck was WAIT.

I wanted to help and tell him that it was ok or to take his time, but I discovered that none of that is particularly helpful and all I needed to do was wait. Sounds easier than it is!

A: I am working on my second book at the moment. It is all about a boy whose wishes start coming true, and he is not sure if it is all just a weird coincidence. It’s been so much fun to write so far.

A: I am about to record the audio book version of The Boy Who Made Everyone Laugh. So soon enough you will be able to get snuggly with a hot chocolate and I can read it to you!!