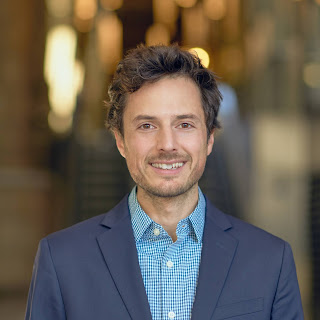 Stephen Kurczy is the author of the new book The Quiet Zone: Unraveling the Mystery of a Town Suspended in Silence. His work has appeared in a variety of publications, including The New York Times and The New Yorker. He is based in Woodstock Valley, Connecticut.

Q: How did you first learn about Green Bank, West Virginia, and why did you end up returning there multiple times?

A: I simply searched online for “places in the US without cell service.” As someone who hasn’t owned a cellphone since 2009, I was wondering if—in our increasingly digital world, where 97 percent of Americans own cellphones—there was still a place without pervasive constant wireless connectivity.

The more I read about Green Bank, the more questions I had. Was life fundamentally different in a place with restrictions on wireless technology?

Smartphones have been credited with causing everything from insomnia to depression to car accidents. Do people sleep better in a town where WiFi is reportedly illegal?

Would there be fewer car accidents in a place where it was impossible to text and drive at the same time? Would there be a tighter community in a place that’s more removed from the online world of conspiracies and divisive politics? Would schools be more hands-on and education enhanced by the presence of a world-renowned astronomy observatory?

Answers were rarely straight-forward, especially as I found myself falling down a rabbit hole and coming across an eclectic mix of people—alien hunters, government operatives, back-to-the-landers, cavers, white supremacists, electrosensitives, and some of the kindest West Virginian farmers and everyday people you could ever meet.

I ended up visiting a dozen or so times over three years, totaling about four months on the ground. Each visit to Green Bank revealed another, more nuanced layer to the surrounding Quiet Zone.

Q: In the book, you write of your own relationship to technology, and your preference not to have a cell phone. What do you see as the impact on the residents of Green Bank of living in a quiet zone?

A: Life is different in a place without cell service. Think back to your life in the early ’90s. You can’t rely on a smartphone for directions, for last-minute meetups, for emergency calls. You have to plan ahead.

That means knowing how to change a car tire. Looking up driving directions before you leave. Knowing when and where everybody is meeting, because you won’t be able to text “Where are you?”

Perhaps that sounds bothersome. I think it’s liberating. When driving, you don’t have to be looking at a smartphone or listening to a bossy GPS voice. You’re more free to have a conversation uninterrupted by a ringtone. You’re forced to really be wherever you are, with whomever you are.

As I learned while writing this book, there’s a lot of research concluding that having less access to your smartphone and social media is healthy, which I saw evidence for in the Quiet Zone.

An Italian researcher has found that Pocahontas County residents experience measurably lower stress and anxiety, compared to a neighboring county with cell service.

A doctoral researcher from the University of Illinois, Chicago, found that the Quiet Zone helped residents take control of when they chose to be online; it provided “freedom from interference, and freedom to explore other connections,” he concluded.

Because of living deep inside the National Radio Quiet Zone, Green Bankers have also been forced to reckon with a relatively new and mysterious sickness called electromagnetic hypersensitivity (EHS). People with this illness feel intense pain from cell signals, WiFi, and other wireless gadgetry, and hundreds of them have come from around the world to Green Bank in search of refuge.

Should Green Bankers feel obligated to accommodate an illness that is unrecognized by the American Medical Association or CDC? Should locals turn off their WiFi routers, microwaves, and smartphones, if not for the electrosensitives then for the sake of the astronomy being conducted at the Green Bank Observatory, which requires a radio quiet environment?

These questions get at the heart of Green Bank’s uniqueness as well as at its challenge in remaining a Quiet Zone. Locals have been forced to think about the consequences of technological usage, in unexpected ways. 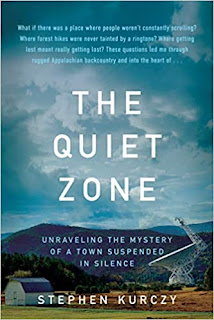 Q: The book's subtitle is "Unraveling the Mystery of a Town Suspended in Silence." How was that subtitle chosen, and what does it signify for you?

A: My book starts with a mysterious death. A woman who believes she is physically harmed by cell signals and WiFi has come to Green Bank looking for radio quiet.

She winds up dead, her body going unnoticed in the woods for days. The incident is not reported in the area’s only newspaper. Why did the woman kill herself? What did she expect to find in Green Bank? Did her death have a message? If so, what was that message?

Getting answers required breaking through the area’s silence, which in itself was another mystery to unwind. Because of its claim to quietude, Green Bank is one of the more famous towns in West Virginia. It’s a bit ironic: The so-called quietest place in America gets some of the most media attention, per capita, of perhaps anywhere in America.

Locals are used to dealing with reporters and TV crews. Because of that, as well as because of a general wariness of outsiders, it can be hard for a journalist to get more than stock answers. So many people told me, “Never had cell service, never missed it,” like they’d all rehearsed the line. Residents played into the narrative that they lived analog.

Spending more time in Green Bank, I found that many locals do in fact have WiFi, smartphones, microwaves, and almost every other modern gadgetry that is supposedly banned in town. That revelation spurred me to look into the Quiet Zone regulations, and I found debate within the Green Bank Observatory and the greater science community about how to interpret and enforce the rules.

On another level, the observatory is fairly silent about the bigger reason for the existence of the National Radio Quiet Zone.

Radio astronomy is the face of the Quiet Zone. Its real power lies in the nearby town of Sugar Grove, where the National Security Agency operates a top secret listening post that is part of the ECHELON surveillance and espionage system.

The NSA and its predecessor in Sugar Grove, the U.S. Navy, came to this area of Appalachia for the same reason the astronomers did: It is extremely radio quiet, which allows for their secretive government operations.

This part of Appalachia is often portrayed as a pastoral, quaint, slow-moving valley of forests and cow fields—an idyllic haven from the ills of the modern world. To some degree, that’s true.

But like anywhere, Green Bank and the surrounding county of Pocahontas has a darker side, and getting to that underbelly meant approaching the book like a mystery to unravel.

Q: What impact did writing the book have on you, and what do you hope readers take away from the book?

A: My book began as a quest to learn about the last quiet place in America, hoping that it might reveal lessons about the good life. If that sounds somewhat pollyannaish, I wouldn’t disagree. Green Bank is no utopia. The Quiet Zone is not a silent zone. Residents have smartphones, WiFi, microwaves, and most every other technology.

That reality underscores how quiet is an increasingly scarce, and therefore exceedingly valuable, resource that I hope more people will recognize and want to preserve.

In part, that means voicing support for the Quiet Zone and the radio astronomy being done at the Green Bank Observatory. It also means internalizing the quiet by turning off our devices, going offline, and soaking up the measurable benefits that come from reducing screen time—from better sleep to better sex.

This advice goes for myself, too. I may not have a cellphone, but I still find it difficult to go offline for even short periods without growing anxious. I also know that whenever I manage to log off, I feel healthier and happier.

While working on the book, I was also forced to reckon with the insidious legacy of the racist National Alliance and its founder William Luther Pierce, who lived just south of Green Bank for several decades.

I mentioned that going into the Quiet Zone was like falling down a rabbit hole. The National Alliance was a big one. What brought Pierce to a place so often described as a refuge from the evils of the world?

This is the guy who wrote the infamous novel The Turner Diaries, which has been linked to at least 40 terrorist attacks and hate crimes in the United States and overseas. He essentially wanted to make America white again and sought to foment a race war. He openly called for the killing of Jews, Blacks, and other minorities, not to mention feminists and “race traitors,” or white people in relationships with non-whites.

I am white. My wife is Korean. Our children are mixed race. We don’t fit into Pierce’s idea of America. And it’s incredibly scary to think that many people share that vision. Pierce died in 2002, but since then the internet has only made it easier than ever for his influence to grow.

We often equate quiet with peace. But in Pocahontas County, Pierce found cover in the quiet of Appalachia. That’s a problem. There are some things we can’t stay quiet about, because silence in the face of evil is a form of consent. I came to realize during my time covering the National Alliance that I personally need to be more vocal in opposing racism and committed to racial equity.

A: Raising two kids! Our first son is 20 months old, and he loves the outdoors. He and I have together been hiking the 48 tallest peaks in the White Mountains of New Hampshire. We have nine more summits to tag, which will entail several 20-mile-long hikes. Of course, I’ll be doing it all without a cellphone. (Not that there’s any cell reception in these remote wilderness areas.)

A: Pocahontas County is a wonderful, beautiful place with some of the kindest people anywhere in America. Everyone should see it for themselves!

It’s awe-inspiring to stand below the massive Robert C. Byrd Green Bank Telescope. The observatory offers guided tours, including inside the telescope where the world’s first official search for extraterrestrial intelligence was done in 1960.

Outside of Green Bank, you can sleep atop a fire tower in Seneca State Forest, get lost in the Cranberry Wilderness (don’t forget to pack some locally baked pepperoni rolls—they’re ideal hiking food), attend a nature education event at Yew Mountain Center, and catch live bluegrass or folk music.

Two local bands—the Elk River Ramblers, and Juanita Fireball and the Continental Drifters—include scientists and engineers from the observatory, underscoring how that world-class astronomy facility is so intertwined with the Appalachian community, in the best of ways. OK, I’ll stop there. I’m starting to sound like a tourism brochure.