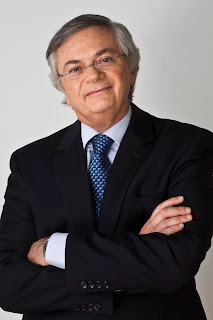 Moisés Naím is the author of the new novel Two Spies in Caracas. The book was translated from Spanish to English by Daniel Hahn. Naím, the former editor-in-chief of Foreign Policy magazine, has written many nonfiction books, including The End of Power. He lives in Washington, D.C.

Q: What inspired you to write Two Spies in Caracas?

A: Frustration and liberation were two strong feelings that prompted me to write Two Spies in Caracas, my first novel.

The frustration stems from my belief that I was not telling my readers the full story of what was happening in Hugo Chávez' Venezuela. On a very intimate level, I knew what was going on, but I couldn’t publish it, I just didn't have the evidence.

This leads me to the second motivation: a sense of liberation. I wanted to write a work led by my imagination not by official documents and verifiable facts.

My intention in writing this book was not to produce an ideological manifesto or a political document. My desire was to tell an interesting story and entertain the readers. Also, to tell the world how one of the wealthiest nations became one of the poorest and the role played by larger-than-life characters that actually pushed an entire nation into a cliff.

Q: Did you need to do any research to write the novel, and if so, did you learn anything that especially surprised or fascinated you?

A: I have been writing newspaper columns, academic articles, books about Venezuela and on Hugo Chávez for more than two decades. I’ve written about his Bolivarian revolution, his 21st century socialism and about the way he acted both inside and outside Venezuela.

All these were analytical works in which I used the best techniques I could find in journalism and the social sciences. The use of evidence, statistical analysis - the verification of data, the corroboration of facts and using more than one source were indispensable requirements of my nonfictional writing. 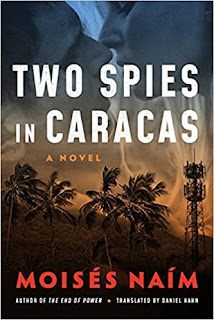 With the novel I gave myself the possibility of telling the story that I knew - the story that I had researched - as a work of fiction, as a novel that contained many facts and events that I knew were true but that I could not corroborate. I decided to cast off the shackles and write without being anchored to the obligations of a journalist or a social scientist.

Q: As someone who's written many works of nonfiction, did you enjoy writing this novel? Was your writing process similar, or completely different?

A: I enjoyed it immensely. And, of course, the mindset and the writing process of the novel were different from my experience writing nonfiction.

The novel is also quite real as I included many events and situations whose occurrence is easily verifiable. One needs to just look on the Internet, search on YouTube or read the newspapers of the era to find them. Several of the novel's protagonists are also historical figures.

But, as I said, many situations and characters are products of my imagination. In some cases, though, I also included people I've met but whose identity I've changed.

Two Spies in Caracas is a thriller where readers witness this very complex human story of two rival spies interacting in unsuspected, surprising ways and whereby readers are also taken in what, I believe, is a fascinating political tale intertwined with a love story.

Q: What do you hope readers, both those who already are familiar with Venezuelan history and those who come to the book without much background, take away from the story?

A: This novel takes place in a wonderful country. A country that has been plundered by a foreign power, Cuba. Many things have happened in Venezuela that are not known. I am hopeful that the wonders of Venezuela are permanent while the devastation it suffers in these times is temporary.

A: I continue to write a weekly column on international affairs and also host and produce Efecto Naím, a weekly television program that airs throughout the Americas on DirecTV. The program won an Emmy award in 2018.

I am also finishing a nonfiction book titled The Revenge of Power (a follow-up to my New York Times bestseller, The End of Power), which explains the mutations of political and economic power taking place in this century. The Revenge of Power will be published by St. Martin’s Press and will be on bookstore’s shelves come early 2022.

A: I would like to introduce readers to a few of the characters they will meet. A CIA operative in Venezuela disguised as a Mexican business-woman. No one would think that she instead came from Washington and was tasked by her bosses to counteract, contain, and sabotage the influence of the Cuban regime in Venezuela.

The other main character is a Cuban spy, who has the mission of neutralizing Washington’s attempts to contain Havana's influence in Caracas. These two spies are passionately committed to their mission but that commitment is tested in myriad surprising ways.

The adventures of these two protagonists allow us to get to know other characters who shape the tale.

There is, for example, the brave journalist whose investigations reveal facts that the government is determined to hide.

There is also the young single mother, always mistreated, who has discovered in Hugo Chávez not only her redeemer, but a man she trusts and somehow knows will not deceive her.

And then there is the Swiss banker, who specializes in managing sudden fortunes in corrupt countries and who has come to Venezuela to help those close to the regime manage their newly acquired fortunes.

Readers can also expect to learn more of historical figures such as Fidel Castro, Hugo Chávez, their wives, and many others.