Judy Bolton-Fasman is the author of the new book Asylum: A Memoir of Family Secrets. Her work has appeared in a variety of publications, including The Boston Globe and The New York Times. She lives in the Boston area.

Q: What initially inspired you to write this memoir about your family, and how long did you work on the book?

A: Although I didn’t have the words to articulate this—I noticed my father’s silence throughout my childhood. On some level, I wanted to interrogate his silence even as a kid. As I grew older, I was sure that he had secrets, and sure enough he did.

I worked on the book for 15 years. There was a lot of deleting and revising!

Q: Throughout the book, you refer to your namesake, fictional girl detective Judy Bolton, as you investigate your family secrets. Do you feel that in the end you found the answers you were looking for?

A: I do feel I got the answers to my questions through a mixture of unearthing facts and judiciously deploying speculation. After writing this book, I have come to believe that mixing facts and speculation yields a powerful truth.

Q: How would you describe your parents' relationship? 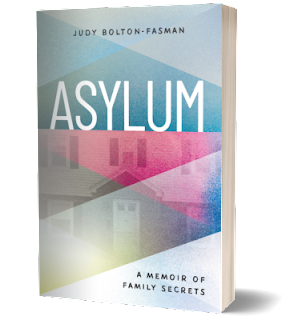 A: My very staid American father was a generation older than my Latinx mother. They were both Jewish but my father was completely assimilated and my mother was very steeped in her Sephardic traditions. If I had to choose a word to describe their relationship, I’d call it fraught.

Q: Asylum is the name of the street in West Hartford where you grew up. How did you choose "Asylum" as the book's title, and what does it signify for you?

A: The title was a gift from the universe. Most of the time I worked on the book, Asylum figured into the title. In the end, the double entendre was too delicious not to use.

Although my mother was a Cuban immigrant, the rest of her family found refuge or asylum in the United States. There was also quite a bit of insanity happening in that house so aptly located on Asylum Avenue. So there’s that connotation too.

A: I find myself writing essays about my mother. I just finished one about her childhood, and I’ve published a few about her in her old age. Perhaps they will be the basis of a second memoir. But that’s still very much in flux.

A: I want to point out that I’m publishing my first book at 60. I want people, especially women, to believe that there is no statute of limitations on pursuing your dreams.