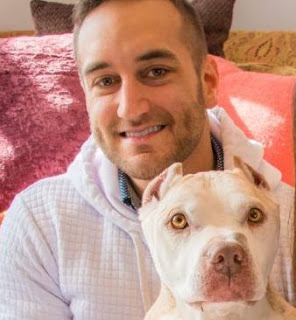 Jason Kraus is the author of the children's picture book Belly Rubbins for Bubbins: The Story of a Rescue Dog. Sydni Cohen, a special education teacher, created an Accessibility Version of the book.

Q: What inspired you to create Belly Rubbins for Bubbins?

Jason: After adopting Gibbson (The Real Bubbins) who was found wandering the streets of Newark, N.J., at 10 years old, my perspective on life was changed entirely.

Gibbson made me realize what was important and that living beings like him were suffering and needed help. Gibbson was likely used in dog fighting as he had scars all over his head, neck and body in addition to having his ears cropped and teeth shaved down.

One night I asked myself how anyone could do this and how this would ever stop. In that moment I remembered during my master's degree in Counter Terrorism and Homeland Security that the only thing that had ever been proven to stop terrorism long term was education.

I realized that "We can spay, neuter, shelter, foster and adopt, but until we educate it won't stop." 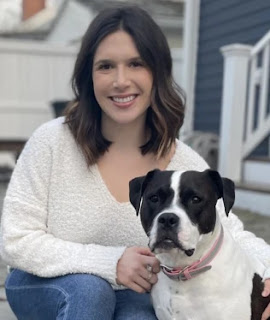 Bubbins was created in order to serve as a central character that the rescue community could rally around and would be able to teach children about rescue dogs and animal shelters in a fun, entertaining, and tasteful manner. This way we can take a proactive approach and stop animal neglect and abuse before it starts!

Q: At what point did you decide to create the accessibility version of the book, and what did it involve to put it together?

A: In the fall of 2020, Sydni saw Bubbins's feature on the popular animal website The Dodo, and being a rescue mom herself, was touched and ordered a copy of the Bubbins book.

After telling her husband Zach of her intentions, Zach suggested that she instead reach out to Jason (the author) directly to see if he would be willing to create a first-of-its-kind book specifically designed for children with special needs. 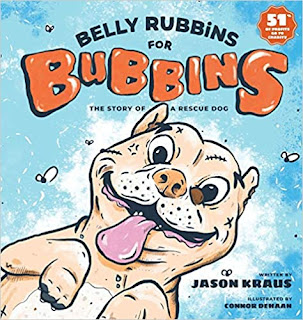 That way, once adapted not only would the story of Bubbins be accessible to Sydni's students, but to students everywhere.

Even though Sydni thought the odds of Jason agreeing to do so were slim, she messaged him through Instagram with her proposal. Jason's grandmother was heavily involved in disability advocacy and therefore was immediately on board to learn more.

Soon after, they connected over Zoom and Sydni explained to Jason that there are no books readily available on the market today that serve the specific needs of children with disabilities. She went on to explain that this leaves teachers, parents, and caregivers to adapt their own books using DIY platforms.

Jason was dumbfounded that there were no accessible books on the market and was immediately invested in bringing the Bubbins Accessibility Version to life!

Since then, Sydni and Jason have teamed up to create an “Accessibility Version” which readers can differentiate based on their learning needs.

In addition to simplifying and shortening the story, there are a variety of features to support readers with disabilities. Among these features are pictures paired with text, a core board to support communication, and simplified illustrations paired with a high contrast outline around Bubbins to support vision needs. 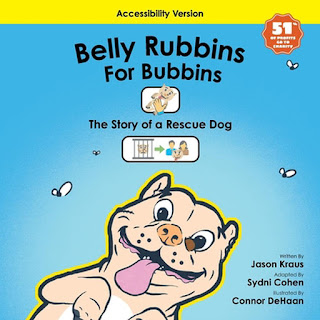 Sydni:  The story of Bubbins is one of resilience, staying positive, and never giving up. I am so happy that this message and story is accessible to readers of all abilities. The “Accessibility Version” supports inclusivity for all children and it has been so special to see its early impact.

At the end of the school year, I gave a copy of the Bubbins Accessibility Version to all of my students, and one student opened the book to “Communication Station.”

Core boards are something commonly used in special education, and when this student saw a core board in the book, her face lit up and she started giggling. It was amazing to see how excited she was to have a “real” book that was created for her and her learning needs.

I hope that readers with disabilities and unique learning needs have similar responses, and are excited to use features throughout the book which were made specifically to support their needs.

Q: What first got you interested in working on children's picture books?

Jason: My realization that everything comes down to education. There are so many problems in the world today, but instead of equipping children with the knowledge to face and solve these problems, often times they are just provided with mindless entertainment.

Children's books are an amazing mechanism to merge education and entertainment - to inspire children through thought provoking characters and stories.

Sydni: Jason and I are planning to collaborate on building out a whole series of accessible books. Stay tuned!!

A: The Accessibility Version along with all of the Bubbins books are available on the website: www.bellyrubbinsforbubbins.com. They are also available globally through Amazon, Barnes & Noble, as well as 23 other online retailers.