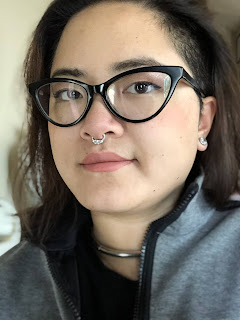 S. Qiouyi Lu is the author of the new novella In the Watchful City. A freelance writer, editor, and translator, Lu is based in Los Angeles.

Q: What inspired you to write In the Watchful City, and how did you create your character Anima?

A: In the Watchful City was inspired by many things. I’d always wanted to create a secondary world, and I had a couple stories I’d written in-universe that I wanted to tie together.

The frame story came out of a trip to China with Western and Chinese writers where I got to see emerging technology that integrated facial recognition with digital wallet payments. It was interesting to see different cultural attitudes toward facial recognition, surveillance, and privacy.

I began to construct a narrative afterward where surveillance might not be dystopic as it’s often depicted, but perhaps something more benevolent.

As part of that narrative, I created Anima, who’s a bit naïve in the beginning of the story, because Anima’s been sheltered in a closed-off society and has really only known one way of thinking. I wanted to tie together Anima’s growth as a character with an exploration of different parts of the secondary world as illustrated through the short stories.

Q: The Publishers Weekly review of the book says, “Lu’s full-length debut (after the collection Inhalations) combines beautiful prose, a complex structure, and well-wrought Asian-influenced worldbuilding into a powerful, futurist work.” What do you think of that assessment? 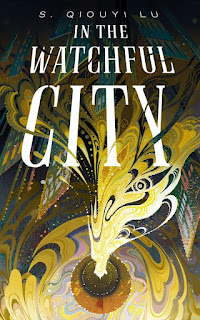 A: I’ve been pleasantly surprised by the early reception to In the Watchful City and how many people have described it as a powerful work. I wasn’t sure how the novella would be received, as it’s a bit experimental, but the positive Publishers Weekly review and other feedback has been encouraging.

I’ve also found it interesting that many people describe the book as “Asian-influenced.” There’s certainly a lot of Asian touchstones I incorporate, but the book also includes a weird Western that’s strongly influenced by the U.S. Southwest, and the mermaid story is in part influenced by the aesthetics and ecology of the bayous of the southern U.S. I see the influences as a bit more varied than can be encompassed by one descriptor.

A: I did a bit more outlining for this novella than for my other work, mostly because I had a metanarrative structure in mind. I reworked the ending of the outline several times, though, and I don’t think I knew the specifics of how the novella would end until I got there.

A: I mostly hope that readers will take away a sense of wonder and curiosity. I’ve done a lot of work in the novella to write narratives that challenge assumptions and create societies that conceptualize their norms and values very differently than what I’ve experienced in the real world.

I’d love for In the Watchful City to inspire people to explore their own assumptions and realize that some may not be as fixed as they think.

A: I’m currently writing another novella for Tordotcom Publishing. It won’t be a sequel to In the Watchful City, though it’ll be set in the same secondary world.

The novella is still in the early stages, but it’s shaping up to be a story that draws heavily from my background in linguistics. I’ve always wanted to write linguistic speculative fiction, one where the worldbuilding centers on language and cultural contact.

The novella will probably be more story-driven than In the Watchful City, which focused more on the characters.

A: I’ve produced an audiobook for In the Watchful City independently. You can find out more at my website: https://s.qiouyi.lu/in-the-watchful-city.