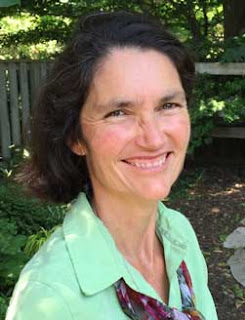 Susan Hughes is the author of two new children's picture books: Walking in the City with Jane: A Story of Jane Jacobs and What Happens Next. Her many other books for kids include Maggie McGillicuddy's Eye for Trouble. She lives in Toronto.

Q: Why did you decide to focus on Jane Jacobs in your new children's picture book?

A: I’d always known a little bit about Jane Jacobs, probably because I live in Toronto and she was so important to this city and its development. So when I was playing around with the idea of writing a picture book biography for kids, she came to mind—but I didn’t know too much about her.

I did some fairly intense research and the more I learned, the more certain I was that this amazing person would be a terrific subject for a picture book.

She’s such a smart, creative woman whose original ideas about how cities work have had a profound impact on urban planning around the world; she was an activist who cared passionately about her own neighborhood and her city and fought to protect their integrity; she believed everyone was an “expert” about where they lived and their views and opinions had value; she was dismissed by urban planners with academic credentials because she didn’t have a college degree but she wasn’t intimidated by them; she was an excellent writer and problem-solver and a hard worker; she lived and worked in both the United States and Canada. Amazing, right?

As it happens, many of her attributes and her areas of interest seemed to align with the curriculum subjects being studied by kids in Canada and the U.S. from the elementary grades right up through secondary school—and built on many foundations of what they were already learning. Plus her life was just so interesting that I knew kids of all ages would be intrigued! 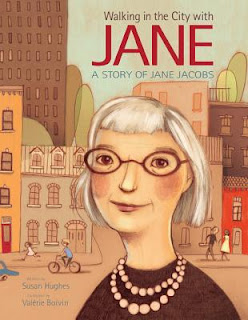 A: I did lots of online research, of course, as well as skimming through her ground-breaking text, The Death and Life of Great American Cities, and books that others had written about her. I also got in touch with her son Jim.

What surprised me most about Jane was discovering both how intensely curious she was and what an independent thinker she was right from her childhood and throughout her whole life.

She always seemed interested in learning about how things worked, and she didn’t sit around waiting to find out answers from others. She went in search of answers, even coming up with her own ways for finding out information.

For example, when she was a child, she had imaginary friends from the past hanging out with her simply so they would question her about the things around them, such as traffic lights and train engines, prompting her to provide answers to why these things were there and how they worked. She liked the challenge of figuring things out by close logical thinking and first-hand investigation!

Q: You also have another new picture book out, What Happens Next, which focuses on bullying. Why did you choose that as your subject?

A: Well, I didn’t set out to write a story about bullying! I wrote What Happens Next because I was inspired to explore a style of writing and, consequently, a particular point of view—an outsider’s point of view. 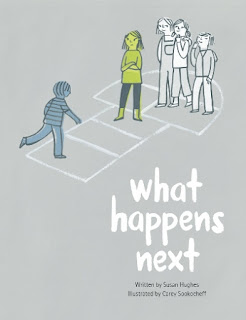 I’d read a wonderful novel by Yannick Murphy titled The Call in which the main character, a country vet, records the events of his day in a call-book, using headings and jotting down notes both professional and personal. I marvelled at the extraordinary effect of this style on my response to the character and the story. Somehow, it moved me beyond the meaning of the words.

I began to imagine a child narrator who thought in this way. Might this way of thinking—self-prompts, spare and direct replies—be reflected in the way a child moved and acted in the world? How might other children react to a child like this?

I began to write in this particular first-person narrative style: my story’s narrator sharing thoughts in an extremely structured way, report-like, a question statement-prompt followed by a response.

For example,
What I Say When Mom Asks How My Day At School Was:
Fine.(p 10)

And as soon as I began writing in this style, my character emerged. The first-person narrator’s way of thinking seemed to express the narrator way of being, and this seemed to evoke this story about difference.

The story seemed to be about the effect of the narrator on others; how others, particularly one girl, feel alienated from the narrator because of something … perhaps something as subtle or as obvious as the narrator’s manner, physical actions, posture, word choice, and so on. We never see this in the story. We just see the consequences. 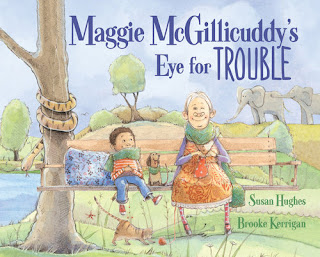 A: I hope that kids of all ages will enjoy it! It is a story about two unique characters, of course, and what happens between them, and I hope children are moved by this.

I also hope it may prompt them to realize that our feelings and how we act are separate. I’d like them to consider how certain people or situations make them feel, analyze those feelings (what they are, what prompted them), and then think about how they want to respond.

I hope What Happens Next will get kids thinking about perspective and ways of thinking, about understanding, empathy, and tolerance; about differences and diversity of all kinds, for example, kids new to a country, a classroom, a language; differences in race, gender, ethnicity, family structure, wealth, intellectual abilities, physical abilities; about why there are differences between people, how differences might make us feel and why, whether our reactions to differences are reasonable, justified, and compassionate, and how to deal with situations in which we or others are experiencing bullying, intimidation, or domination or are the ones initiating this behavior.

I know—that’s a lot, right?

A: I’m working on several picture book manuscripts, all based on real people and events., and I’m doing some commissioned writing. I’m shopping around an upper middle-grade manuscript and a YA manuscript.

And I’m continuing to enjoy critiquing manuscripts from picture books to YA, adult fiction to graphic novels, for clients, as well as coaching. Interested writers are welcome to get in touch with me and inquire about my services!

A: I feel so fortunate to work in an industry where all involved—writers, illustrators, editors, designers, publishers— are so supportive, collaborative, and lots of fun to work with!

--Interview with Deborah Kalb. Here's a previous Q&A with Susan Hughes.
Posted by Deborah Kalb at 6:44 AM