Jo Weldon is the author of the new book Fierce: The History of Leopard Print. She also has written The Burlesque Handbook, and her work has appeared in a variety of publications, including Mental Floss and Time Out New York. She runs the New York School of Burlesque, and she lives in New York City.

Q: How did you come up with the idea for Fierce, and what do you think accounts for the ongoing fascination with leopard prints?

A: About five years ago, I was stalled on another project I'd been working on for a few years. I was staying with my friend Indigo Blue in Seattle, described my frustration, and she said, "Save that project for later. For now, what do you love? What's fun?" and I said, "Leopard print." That was it -- I started researching immediately.

I think the ongoing fascination with the print is related to the big cats. There are also a lot of cultural connotations to examine, but you can't resist the pull of nature!

It's common to see the words "wild" and "jungle" and of course "fierce" used in advertisements for leopard clothes, and other references to raw and unfettered life. The cats are beautiful and dangerous, warm and nocturnal, powerful and independent. We can't help but want to identify with those qualities.

There is a brilliant photographer, Emilie Reigner, who has been documenting people wearing leopard print in Africa, Europe, and the U.S., and who is doing important work that I think demonstrates its meaning in the context of globalization, its path through other continents which points up our need to be culturally sensitive with the use of the print, and her work shows a lot of pleasure in the expressions and body language of its wearers.

Many people have told me that when they put on leopard print they feel bolder and more confident. And of course, we know that cats are playful, even big cats. One woman told me that she works with bullied children, and one of the confidence building exercises they do in therapy is to have them dressed in leopard print and roar, and the kids respond beautifully.

Q: The book looks at thousands of years of leopard print fashion. Where did it first begin?

A: On leopards, of course! Honestly, it depends on how you define fashion, since in many places it's been ceremonial, though not always exclusively, as part of governmental events, religious services, and celebrations in regions where big spotted cats are known, notably in many countries in Africa, Asia, the Middle East, and the Americas.

In European countries there were eras of sumptuary laws that reserved the wearing of leopard fur for nobility. 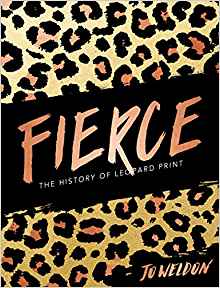 In clothing worn for social reasons in Western fashion, one of the most significant eras is the early 18th century, where the textile print became popular after Louis XIV kept a menagerie of animals rarely seen in Europe, and then again in the mid-to-late 18th century on male dandies known as macaronis and in the courts of Italian and French royalty. Check out my Pinterest for some examples!

In the 20th century, spotted cat furs were hugely popular with flappers, who needed big warm coats to ride in unheated cars while wearing short skirts. You would also see these furs on opera and movie stars playing femme fatales, often as part of an orientalist aesthetic, which influenced our view of the pattern as part of an independent, glamorous, rare, and possibly dangerous feminine persona.

The print began to come into its own throughout the 1930s but had its most-remarked-upon high fashion moment to that date when Christian Dior used it in his landmark 1947 debut collection. From then on it was often featured on the finest catwalks.

Q: In more recent decades, who has come to characterize leopard print fashion, and where do you see it going next?

A: Oh, there are so many fabulous divas it's hard to say! In the ‘50s there were lots of beautiful leopard print bikinis and lingerie sets, giving that second-skin effect. I was probably most influenced by Eartha Kitt and Ann-Margret in the 1960s, personally. Among celebrities, Naomi Campbell and Kate Moss, undeniably.

It has also had a big impact coming from the retro fashion communities, seen on Dita Von Teese and Leslie Zemeckis and Christina Hendricks. I've loved seeing Helen Mirren and Michelle Obama in it, too.  Prime movers in the music industry have been Lady Gaga and Beyonce, of course.

And now there are so many men who wear it well, which is fantastic, even though on them I see it most often worn by them when performing, or in super casual fashion.

And so many Drag Race stars have done such spectacular fabulous things with leopard print -- honestly, it's their costumes I covet most! And those are all by independent designers, where the wearers are actually collaborating with the makers, so it's peak creative and unique self-expression.

Some historically great fashion designers have done brilliant things with leopard, like Gernreich, Biba, Yves Saint Laurent, Diane Von Furstenberg in the ‘60s and ‘70s, Patrick Kelly and LaCroix and Vivienne Westwood in the ‘80s, and Azzedine Alaia, Gianna Versace, and Gaultier; Yves Saint Laurent, Dolce and Gabbana, Roberto Cavalli, Tom Ford, I could go on and on! So many designers have made so much of it.

This isn't my primary focus in the book because a lot of this fashion isn't accessible to most people, but it's fantastic -- it's art and philosophy and all the fancy things. In my book I'm trying to inspire people who aren't very familiar with fashion history to look into it, because there's so much to uncover.

Q: The book includes many photographs and drawings—how did you select the art to include?

A: Before it was a book, it was an illustrated lecture, so I selected art that helped exemplify fashion trends in the context of societal changes and the democratization of fashion in general, which was the throughline of the lecture.

How did we come to be wearing it now? After all those centuries of clothing being so labor intensive and expensive -- remember, the sewing machine wasn't invented until the middle of the 19th century, and most housing didn't have significant clothing closets until the mid-20th century --  the most interesting thing to me was seeing the process that broke down those barriers, where fashion gatekeepers couldn't prevent the average consumer from being able to wear it.

I looked for things that affected how available it was, and looked for images that would have affected the tastes of consumers. I started out with hundreds of images. Many of them were orphaned, meaning I couldn't find out who owned the copyrights; or they were not available to me or were prohibitively expensive.

Not being able to get some of my original choices led me to find some very exciting images when I went back to my research, such as the image of Wilma K. Russey, the first female taxi driver in New York City.

I think clearing the images was the hardest part, and paying for the rights definitely was the most expensive part! If I had known what I was getting into I might have come up with a different format for the book project!

However, I'm thrilled with the way it looks, and I feel that overall it does exactly what I wanted it to: reinforce the pleasure people take in wearing the print by making them feel connected to its history.

A: Of course I'm always writing about burlesque! I'm working on a handbook of striptease that explains the logistics, theatrics, and psychology of performing seduction, and what it tells us about communication in general.

I'm also writing about the sex workers' rights movement, where I’ve been an activist, and looking at what it has meant historically to be "dressed like" a sex worker.

My friend Laura María Agustín, who has done remarkable research and presentation around migration and sex work, has collected a lot of those stereotypical stock news images of women wearing short skirts and high heels leaning into cars, and it made me think about how little people know about sex workers and their cultures.

A: The colloquial term "leopard print" often refers to other cat prints, such as cheetah, which is also in Africa and Asia, and ocelot and jaguar, which are indigenous to the Americas.

Personally it doesn't bother me when people call other cat prints "leopard," but I think it's worth looking them up and learning their status! All of these cats need our support as ethical consumers, and I think if we've gotten inspiration from them to feel our fiercest, we can pay them back by supporting their well-being and their environments.